More than a few games have tried to gamify spelling and typing over the years, but most of them, like Typing of the Dead or Scribblenauts, have it more as an input mechanic than the actual core of the game. Grammarian LTD has you take on the role of a fresh-faced intern who’s wound up a part of a Grammar Police-Style entity through a management mixup.

In the not too distant future, popular president Baroque Ohama is doing a pretty great job. A lot of good has come from their policies however one, in particular, has completely changed everybody’s day-to-day life: Grammar is heavily policed. This is a future where I’m pretty sure that most people, myself included, would face almost daily fines… and even worse, it’s very heavily policed. You take on the role of a character who has finally landed a new job, making their way into the workforce as a janitor at the prestigious Grammarian LTD. However, there’s been a mix-up and you end up working in the grammar checking department.

I won’t dive into the story, but Grammarian LTD clearly takes more than a few notes from Papers Please. You’re observed, there’s subterfuge afoot, and your job is tied to your wellbeing; work well and you can afford nice things, which make your workday easier.

It’s well-designed, and each new day introduces new elements of grammar that you need to focus on, with occasional tests gating your progress onto later sections. Each of these Boss Fights, duels against other promotion candidates, net you a pay raise which allows you to upgrade your apartment, buy new songs, pick up replenishment items or improve your furniture. Higher-level apartments cost more, but open up new transport options (which preserve or restore your stamina or mood) and open up new furniture upgrades, while furniture improves how well you rest and occasionally gives out single-use items.

There’s a juggling act between how you spend, and if you overspend or overcommit then you can end up in the negative, having to walk to work or — worse — unable to afford your rent. 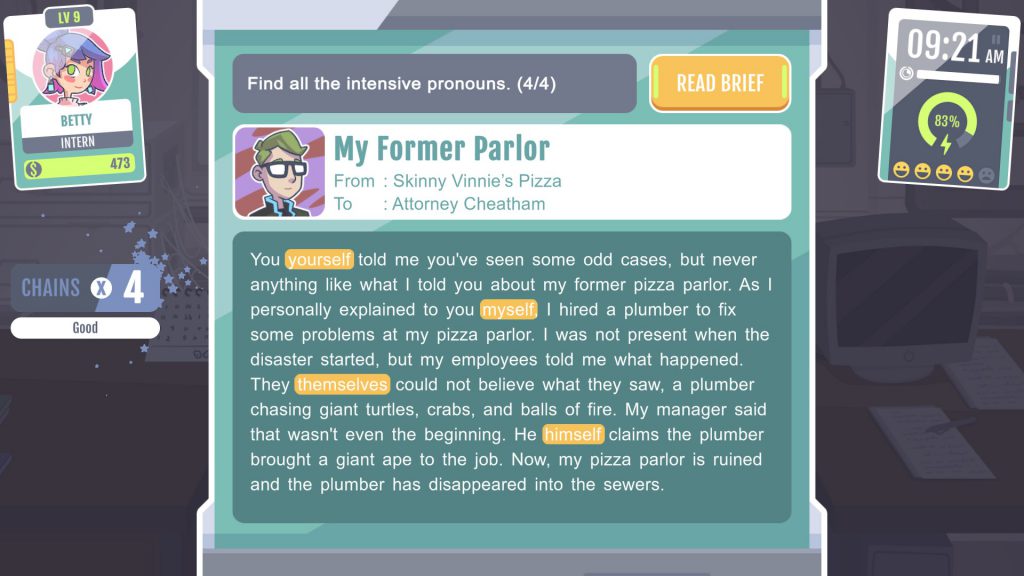 But, how do you earn money? While a steady lump of your income will come from completing shifts, the real secret is in catching every error (there are indicators for how many there are on each page) but mostly in getting combos. At one point I had a 50x combo, and I ended up bringing home about 3k more than did usually — 3k, for example, is an immense amount of money right up until the late game.

However, I suspect you’re not expected to do so well. In fact, there’s a whole system in there for if your mood drops, wherein time races past and you’re given a funny pop-up explaining that you accidentally wound up reminiscing about old loves, or doom scrolling on social media.

The main loop of Grammarian LTD is incredibly simple, however, it’s well made enough that it doesn’t feel as forced as other educational games. You start out the day at home, pick a method of transport to work, get to work, pick items on your desk to work with — or use the menu to change music or use items from your bag — and clear through the work until you either run out of time or submit all of your work as done. There’s a clock ticking away at the top corner which counts as your timer, and if you travel to work slowly (through walking, or taking an indirect route on public transport) then you’ll have less time during the workday to do your editing. After work, you get your results page travel back home and have the option to visit the store, use items, etc, before the end of the day. Occasionally co-workers, friends or family will visit or interact with you, but these are all self-contained instances that operate of the normal time passage. 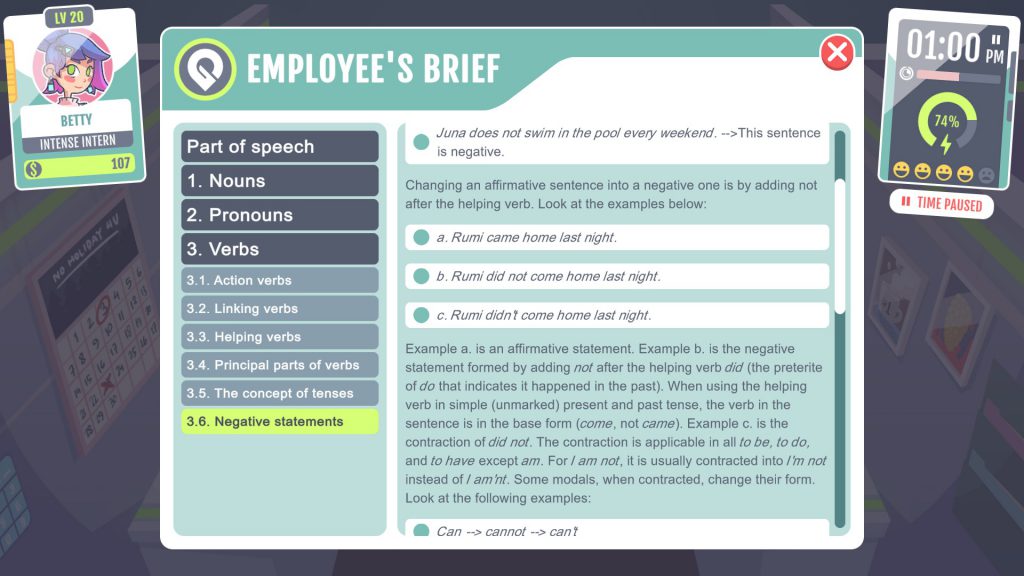 Let’s talk about the work that you have to do. Each day you can click on your computer to learn about the assignment of the day (although there’s also a prompt on the work card, which is useful in the challenges where you’re not simply focused on one element of grammar). This is sequential, and increases in difficulty as you progress through the story — starting with things like plural and singular instances and moving through proper nouns onto semi-colons and more. You then pluck up your work cards, which often relate to each other in some sort of funny exchange. In most cases these make sense beyond the current grammar focus, however, sometimes there’ll be other errors on there to try and catch out people who are simply reading it aloud to identify anything that doesn’t quite fit.

You have to scan through each card and click to interact with the words or sections that are erroneous. Sometimes you just have to highlight to identify things, but often you’ll be clicking them and then selecting the correct option from a drop-down menu. It’s all quite simple, and there’s even a guide at the top of the work file which shows how many errors there are on the page. 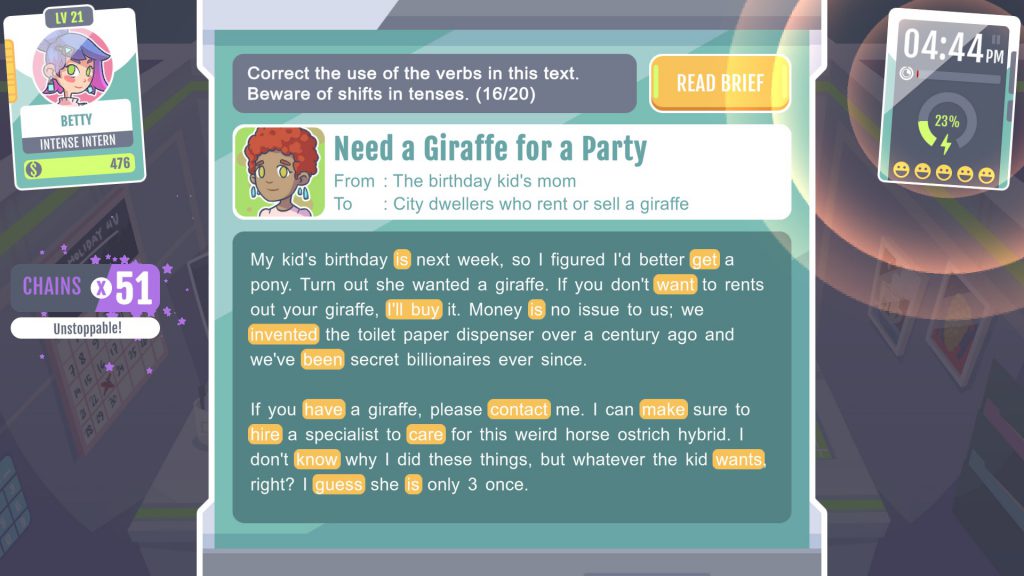 It’s incredibly user friendly, and so I only ran into a few areas which maybe need patching or fixing. Firstly, when a music track changes it comes out from the left of the screen, obscuring the file you’re working on and making stuff underneath the pop-up unclickable until it goes away; Secondly, sometimes the decoy grammar faults really break the feel of the file, making things much harder than it probably should be; And, finally, the slider for longer files is not always obvious, and as only a select few of the files include signatures from the authors, sometimes an error in the signature (or postscript) can be missed.

But, all of that said. It’s very fun, and when you load up a new file and immediately start finding the errors there’s an undeniable sense of achievement that only really comes with the feeling of learning and exercising a new skill. It’s also a very forgiving game, and the art style and tone of writing really keep it so that you never really feel like you can’t come back from a bad day. I also really like the little robot at your apartment, which has a different grammatical fact for you every day (a favourite: There are seven ways to spell the sound ‘ee’ in English. This sentence contains all of them: “He believed Caesar Could See the People Seizing the Seas”).

When it comes to educational games presented as games, the team behind Grammarian LTD have done a great job. Grammar is daunting at the best of times, and they’ve done a great job making it approachable and even… maybe… just a little fun.

Grammarian LTD is available from April 20th for Windows PC, as well as Android and iOS devices.