Foul Play: Once Upon a Crime is a pocket sized murder mystery

Murder mystery games have always been popular with people and we have played many iterations of the formula before, but Foul Play: Once Upon a Crime brings the concept of murder mystery into a single deck of cards that you can take anywhere with you. In a land of make believe, Carabosse the Bad Fairy has died, and you need to figure out who has killed her and stolen her book.

Foul Play: Once Upon a Crime has two set ups to start the game, with the Good Cop mode being easier than the Bad Cop mode. The latter uses all of the cards instead of a select number of cards, and has a more challenging end game. We played primarily the Good Cop mode, just for ease and for the comfort of our group. 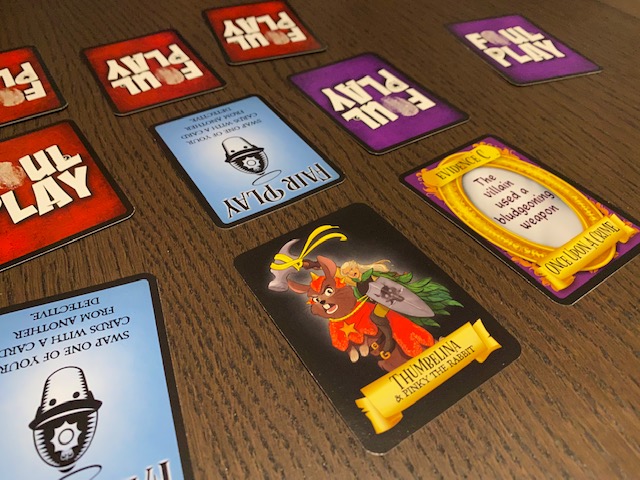 To start the game, you create a deck depending on the mode that you are playing. That deck will then be shuffled and nine cards will be placed, face down, to create a playing field. These cards will be in a three by three grid in the middle of the table. This playing field is the Crime Scene. Each detective that you are playing with will get five cards in their hand, which is their case file, to help them solve this crime. The leftover cards create a discard pile, face down, that is called the Evidence Locker.

Hidden within the cards in play are three evidence cards that will give you clues as to who has done the crime. There are also a host of different characters, action cards, and useless red herring cards. On your turn in Foul Play: Once Upon a Crime, you must take a card from your hand and place it face up in front of you. Everyone has a chance to block your card, but if they do not, you can then take on the action. There are a bunch of different action cards; Foul Play lets you steal a card at random from another player, Gone Cold allows you to discard another player’s entire hand and then they need to re-draw, and Fair Play allows you to swap a card with another player, for example. There are also cards that do not affect other players, but instead let you swap cards or flip over cards on the crime scene, which can be really important when it comes to better understanding the lay of the land. 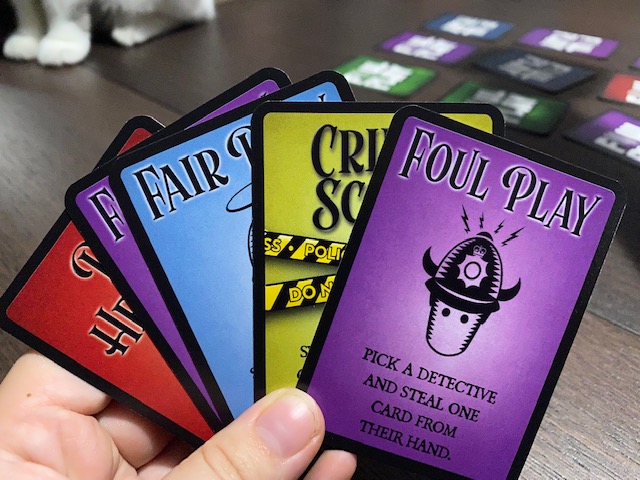 If you do not have an action card or do not want to use an action card from your hand, you can discard a card and take a new one from the evidence locker. If you, at any time, run out of cards, you are out of the game. All that’s left to do is find evidence, understand and remember it, and then get ahold of the card of the baddie so that you can accuse them. If someone tries to accuse a card, everyone needs to discuss it, and if nobody knows of a reason why they are wrong, the game is over and they are the winner.

We had some fun playing around with Foul Play: Once Upon a Crime, once we got into the swing of getting players to get rid of cards in their hand. You see, our group had a real issue with hoarding evidence cards, which meant that some people knew the clues, and others were clueless. Once we had people discard their hands more it really helped the gameplay. This issue was annoying at first, but I am sure if we were more cutthroat instead of kind, it would be easily fixed. The cards themselves have a good variety of actions, and seeing the different characters is pretty cool, especially as their art is detailed and fun to look at! 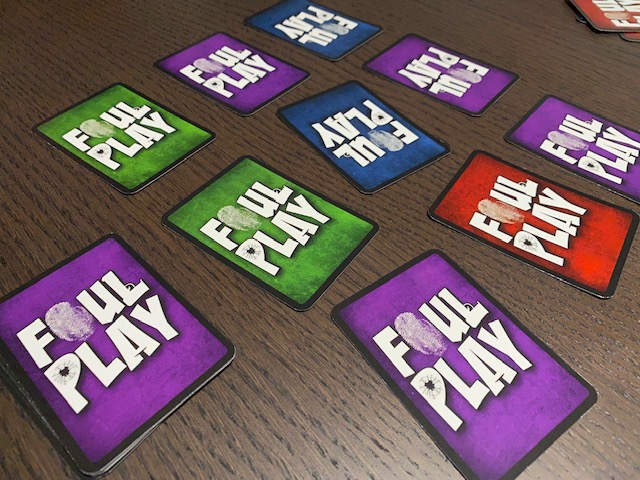 Soon you can find your way into mixing up the crime scene, using the locker room, and otherwise trying hard to solve this case before anyone else. Though Foul Play: Once Upon a Crime is pocket sized, it does provide a variety of different bad guys and tons of entertainment! The fact that the evidence is semi-random at the start, does mean that you will likely end up with a different bad guy each time, so this game can be played again and again.

You can find Foul Play: Once upon a Crime on the developer’s website.