Food Truck Simulator has a heartwarming story, but needs optimization

It is no secret that I love food-related games. In another life, I myself would be running a food truck, flipping my own burgers, or well, probably making tacos if I am honest! So, I am always excited to dive into a new food-related game. Food Truck Simulator has released a demo of their game, and I quickly downloaded it to see how it would fare.

Now, this is only a demo and my computer is a bit old, but I did have a lot of trouble playing this game from the start. I had to drop all of the settings, so that they were all on the lowest graphics available before the game would even run. There are several other people who find the game to be laggy, from a variety of different computers, so I do feel that my comment here on the optimization needed, even with my slightly problematic computer, is valid.

As such, my time with Food Truck Simulator was filled with lag, ruining what otherwise seems like it might be a fun game with a cute story. You see, your dad used to run this food truck, and had some of his best memories running it. Everything has kind of rotted away, but you are looking to take up your dad’s career after he has passed, continuing with your own memory book of the time you both spent together.

Everything needs to be given a new lick of paint and an upgrade, which is something that you will need to save up for and improve, but once you have your truck running, you’ll learn the ropes. The game has a few different places you will be playing in; the garage where you will be updating your car, the world map where you drive around and pick up items from a shop and the place where you are going to sell your food!

Moving around the map is pretty simple, you will not be hampered by running over people or hitting things, which is good. I found this to be the most lag-inducing part of the game, which was a bit of an issue. There is a compass at the top of the screen to show you where you are going and big light points to lead you when you find the right area as well.

Once you have picked up your ingredients (and placed them in the proper places, as your food can root if you put meat on the shelves for example) you get selling, which is what I was most excited for. Selling in Food Truck Simulator puts you into your truck, where you will then have two screens. One screen showcases the orders you have waiting and the other has the recipes needed for these orders. This is really helpful, and it doesn’t seem to matter what order you box things up in. The more orders you make correctly, cooked correctly, the better your prestige is and the more money you will make. 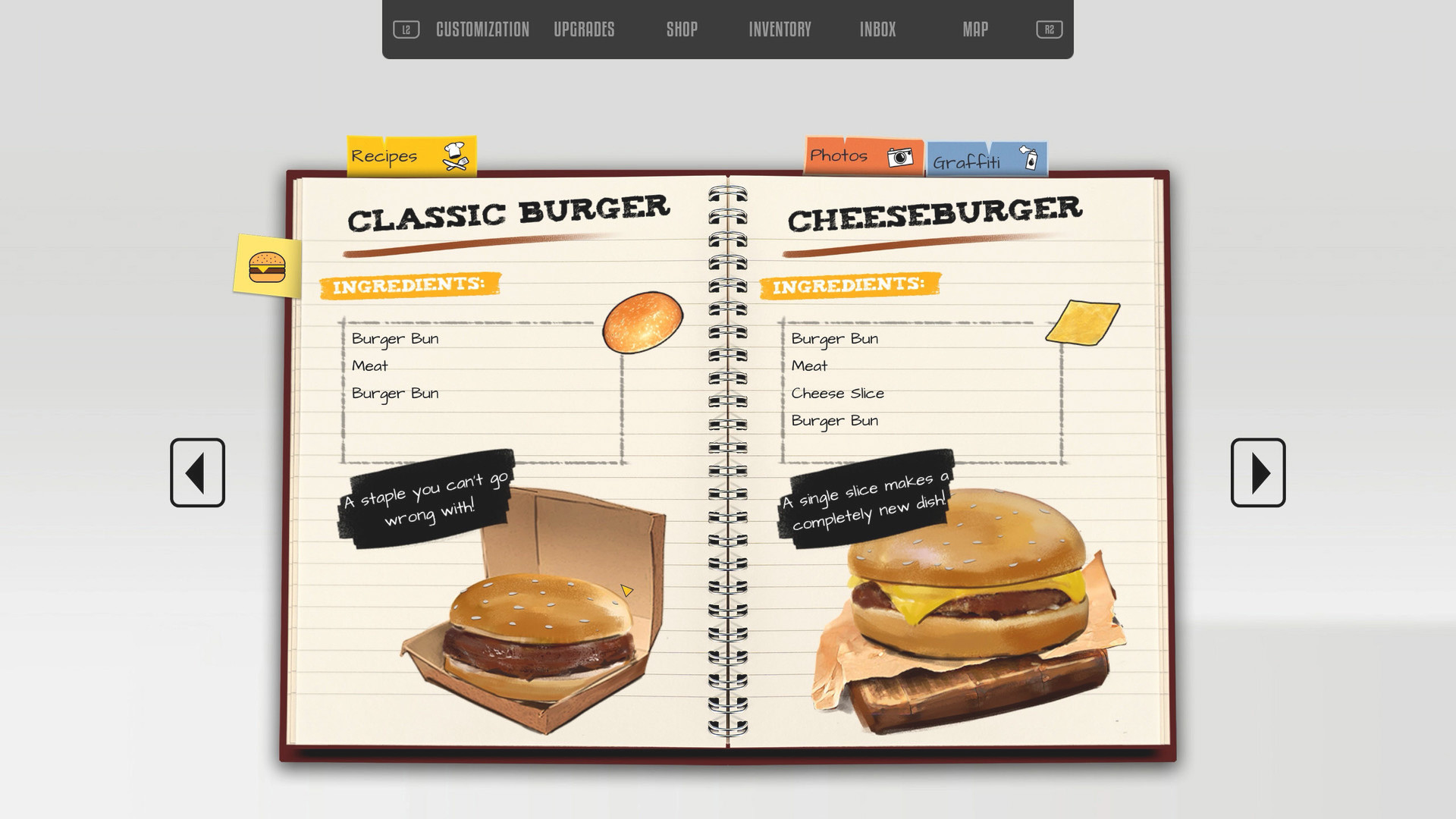 Actually cooking is quite a challenge. You need to put things on the grill, watch them cook and ensure it’s how the people ordered it (medium-rare burgers with overdone bacon, coming up). You also need to grab canisters of gas, put them on a pillar, and switch them out whenever you run out, or things will not cook. There is nothing to tell you when this runs out, so I often got confused when none of my food was cooking.

Another major issue I had with Food Truck Simulator was the lack of directions. It’s really odd because the directions are there, but everything is so overwhelming that I couldn’t actually see any of it. After spending quite some time not understanding why my cutting board kept saying “no cuttable product on the cutting board” I finally googled it, and people had been asking what key to press. It turned out it’s Left Shift and is on the screen. I feel like it was only on the screen after I pushed it, but I am unsure, to be completely honest, and am not going to go back to start the entire tutorial over to check. If the key prompt was there, it wasn’t something I could see on the screen, possibly because there is just so much going on. I feel the controls being more simple to follow (clicking to cut on the board) would be so much easier. With a timer always ticking down, it feels like there is no time to breathe. 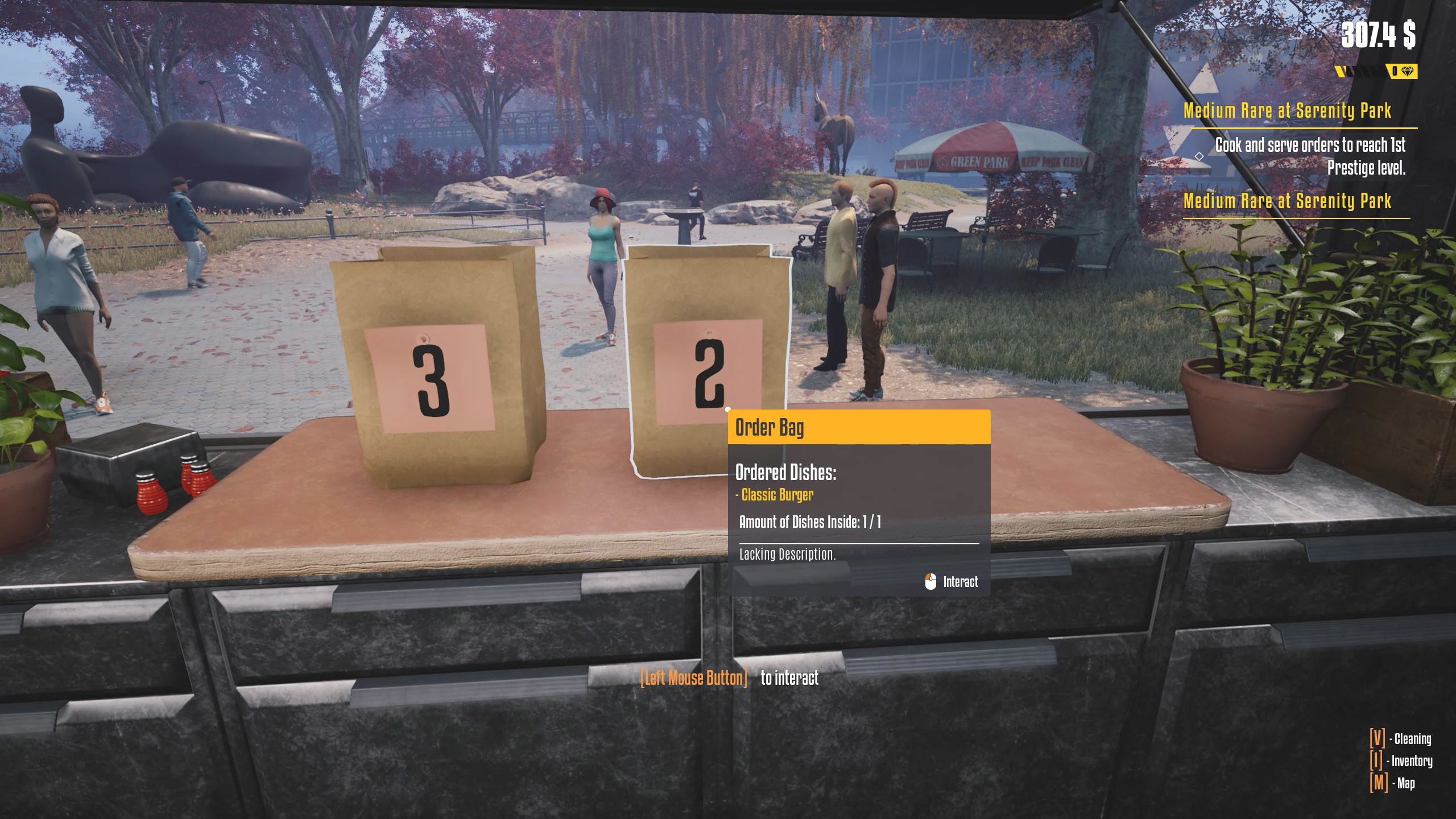 With all of that said, I find the story of a son trying to let their father’s legacy live on to be a great story, and the realistic nature of Food Truck Simulator is really refreshing. It is the hard, challenging world of food trucks, and you’ve got to get things cooked, packaged, and given out to people in a timely manner. There is no room for error, no room to place bacon in the wrong space, and even ordering groceries needs to be considered when running your business. I do hope the game itself is optimized in it’s final release.

You can find Food Truck Simulator on PC.

Hands on with 303 Squadron: Battle of Britain