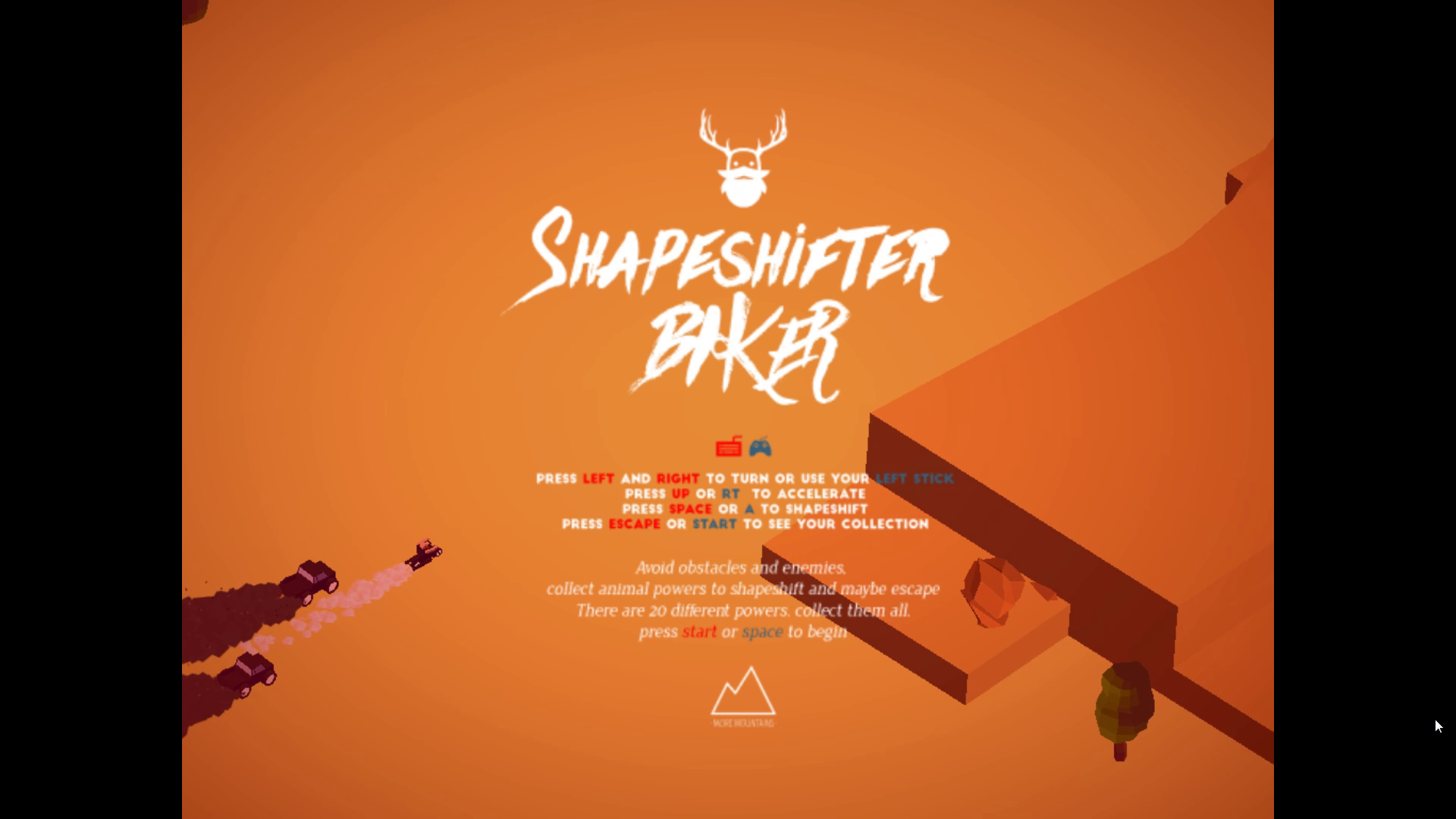 Shapeshifter Biker is a fun, little isometric game made by Renaud Forestié for Ludum Dare #35.  LD35, the latest of the long running game jam, carried a theme of ‘Shapeshifter’ which, as you can imagine from the game title, was taken literally for Renaud’s project.

The game sees you as the titular Shapeshifter Biker blasting across low-poly dunes, dodging trees, and evading trucks in an effort to collect the giant, floating blue cubes dotted around the world.

Having stumbled across the [trailer], its alluring, accoustic soundtrack (Uniform Motion, a band including the creator), the switch to Eagle form gracefully saving the player, the change to TREX to crush the chasing trucks, after seeing those I realised I had to give the game a quick go. A quick go became a couple of hours, and even after that I left the game minimised as to keep the music playing while I scribbled up my notes.

Considering the game was pieced together over less than 72 hours there’s a lot going for it, the controls and acceleration are responsive as you might hope, the 20 different forms the character can take all feel, or at least look, different to one another, level formation is generous and the enemies don’t spawn in too often, meaning there’s always room to maneuver away from the core of them, and put an obstacle in front of them as to end their pursuit.

The animal forms are unlocked in each play-through via the collection of a blue orb, each form has different variables or abilities with certain creatures being faster, some being able to destroy enemies and others being able to depart the desert’s sand for the skies above instead.

The game is currently up for sale over on itch.io with a recommended price of $5. While the game is excellent, and due to it’s simplicity also very replayable it does need work in some areas. Currently on a fail the shapeshift icons still reappear, sometimes flight will carry you off from the ground vertically leaving you out of sight completely while enemies circle in a widening pattern as to ensure your failure on landing. You also need to go to a menu in order to select which creature you will transform into – this could have been managed with a shoulder (or Q + E) button input switching a hud icon between the options.

That said, it certainly IS worth getting, and IS definitely worth paying at least a few units of your local currency for because of the excellent handling, art and music.

I honestly look forward to the next game from Renaud/More Mountains.

Shapeshifter Biker can be found over on it’s itch.io [Store Page].