It seems as if FPHS “First Person Hero Shooters” looks like an in-thing at the moment with Overwatch and Battleborn hitting the glorious PC earlier this year, while Paladins has a fair bit to go but early days yet, it looks promising from the team that brought us Smite, while it’s not perfect it’s certainly a good blast…here’s why. 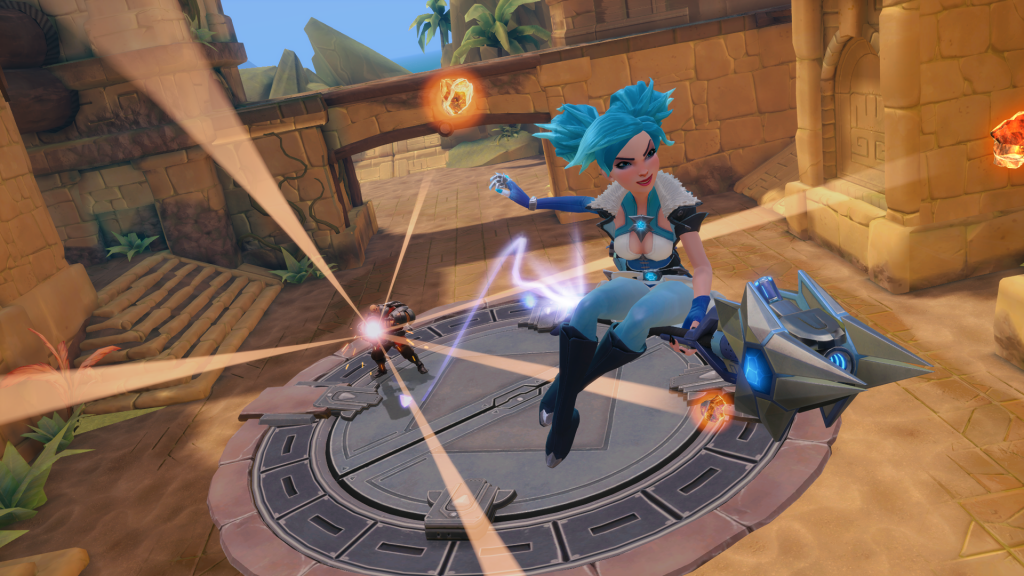 First thing you’ll notice is how the game does not take itself too seriously, as with the graphics and gameplay being cartoony; especially how all 17 heroes (at the moment, more will be added later) look incredibly cute…I can personally see them making cute plush cuddly toys out of them all, they really are all very cute, even more so then say Nintendo’s standards.

Gameplay is 5 Vs 5 PvP game-type where both teams fight for a spawn point of a pay load in the middle of the map. Only thing is, the pay load only spawns when members of your team stay on the spawn point until they have acquired 100 points, so more people of the same team standing on the spawn point the faster it rises than just 1 member of your team standing there, then of course you have to push the pay load to the other teams base which acquires 2 points….1 for spawning the payload, another 1 for successfully delivering it to the other teams base, that keeps happening till a team gets 4 points but if or when you die you can purchase buffs like 5% extra damage, life steal per hit, better damage protection, and others to choose from in your teams spawn point also getting from A to B couldn’t be simpler as all hero’s ride on a mount but sadly you can’t attack or cast any of your 5 skills whilst riding.

Also there is a load out system so you choose which skills are more powerful and give them different effects like Bariks turret which can heal you as well as it main job of shooting at nearby enemies, you can purchase locked cards from chests by either leveling up (gained from matches, obviously you get more experience from winning the match) or by purchasing chests with crystals, each chest costs 50 crystals, you either buy with real money for the crystals or you can log in each for coins or crystals (depending on the day) and if you already have that card that the chest gives you it gives some nice coins instead which helps with other load out cards you don’t have yet.

The UI is very friendly with big bold icons, and text underneath when you get debuffed (for me its too big and feels far too in your face) and sadly the chat just feels too damn small, sometimes its hard to tell if anyone uses it in games; also there’s no map or radar for if you want to check on your team mates, but thankfully you always see where the pay load spawns as it shows on the playing field and how far you are to it.

Controls couldn’t be simpler, as what you would expect from these kind of games as WASD to move, R to reload, left click on mouse is your basic attack or 1st skill, 2nd skill is with the right mouse button, Q is your next skill which sometimes has a cool down, F is also a skill and lastly we have the ultimate skill located as E, but as you might expect that has the longest cool down, there is a keybinding option in the options menu if you need to change anything.

Although it’s still a F2P beta the game can’t handle the players that much as every now and then you get an “server is in a bad shape” error in the chat box once in awhile which means 30 seconds after you see that error you’ll be thrown out of the server and back to the menu screen but the queue times are very short so it is always a short time before you can get back into the fray once again.

All screenshots belong to HI-REZ STUDIOS