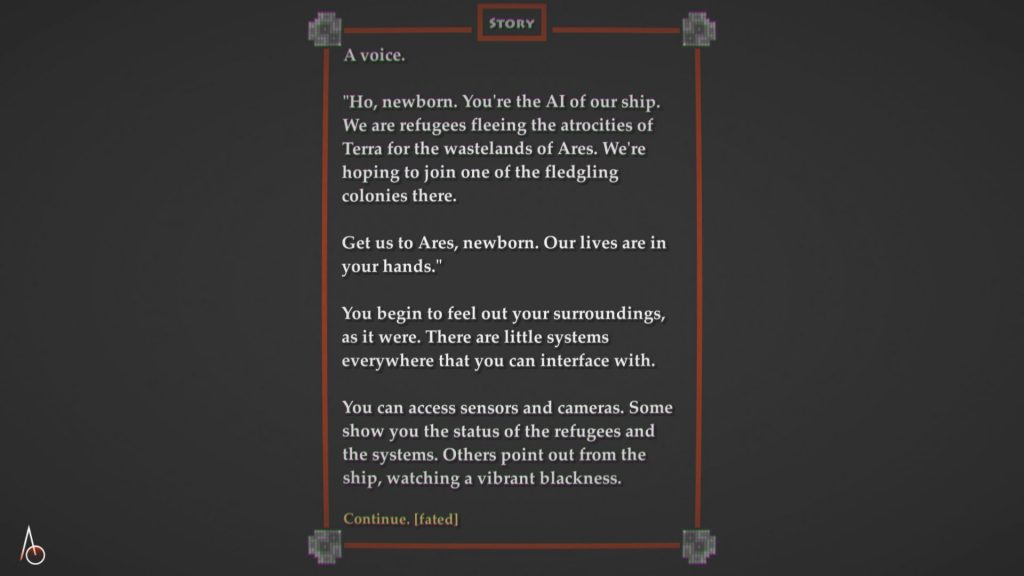 You are the ship! Technically, you are the AI of the ship. You’re an old, rickety, colony ship with a crew of nitpicky and fussy so-called specialists trying to get to Ares. You cannot directly control the crew members, but you can set alerts on various functioning (or malfunctioning) systems to try and get their attention directed to specific areas. Sometimes they do their jobs well, other times, not so much.

Destination Ares will draw many obvious comparisons to FTL. However, the gameplay works differently in many ways. There are no outside forces or races that are after you. All of the mayhem comes from within you, the ship, itself.

At its heart, Destination Ares is a roguelike resource management game. There are intricate loops and systems within the ship to keep producing all of the materials needed to continue your journey—even using waste as part of the process. There are passive parts of the ship that work automatically, but are subject to breakdown (storage unit, batteries, etc.). The active pieces of equipment are the ones that you directly control, by turning them off or on, as well as a few other non-spoilery settings.

All parts of the ship have various functions in order to maintain the regeneration loop. Each element has a quality rating as well, determining its stability and likelihood to need repairs. Granted, some machines are more vital than others, but any  breakdown along the way, if not repaired, will severely hamper or even disable your ability to continued onward. While the engines, (air) scrubbers, and radar may seem more important to your survival, if the hydroponics or even the still breaks, eventually even the smallest of systems will come back to haunt you—as well as hasten your eventual and probable demise. Again, you can only nudge your crewmen by setting alerts to the places that need attention or repair. You never control them directly. Whether they are happy (or smart) enough to take care of any problems is part of the fun of Destination Ares.

Then, there is a very strange part: a mini-game. When an event crops up that is of more importance than the regular mishaps, a screen of choices appears. Once you make your decision, instead of whatever impact that has immediately happening, you are taken to the little mini-game screen. That display is a blacked-out, fog of war type square. You are on a timer to get your cursor from the bottom left of the screen to the top right. However, as you move toward the exit, little square, previously unseen obstacles (mines) pop up through the shrouded area. If you hit them, which you most likely will because you are in a hurry, it sends you back to the starting position in the bottom left—now with even less time to make it out, as the timer is continuously running. They are always randomly placed, so it is not like you can memorize their pattern (which is good!). For me, it really does not fit with the rest of the game well.

Even though in early Access, Destination Ares shows potential to become a very fun, FTL-like game. Watching your people ‘float’ around inside the top-down-view ship (as they are viewed full-figured, top-down as well!) adds to its charm and personality. Once the developers put in some more, well everything, and figure out exactly they want to do with the mini-game, it should be a lot of fun trying to reach Ares—over and over and over again.

Previewed using build v0.7.0. You can read our impressions of earlier build, 0.5.4. from December here.

Rogue Legacy 2 redefines the roguelike genre, without changing anything