I managed, at the recent PC Gamer Weekender, to get some time with Logic Artists’ Expeditions: Viking, the second outing in the series, following on from 2013’s Expeditions: Conquistador. 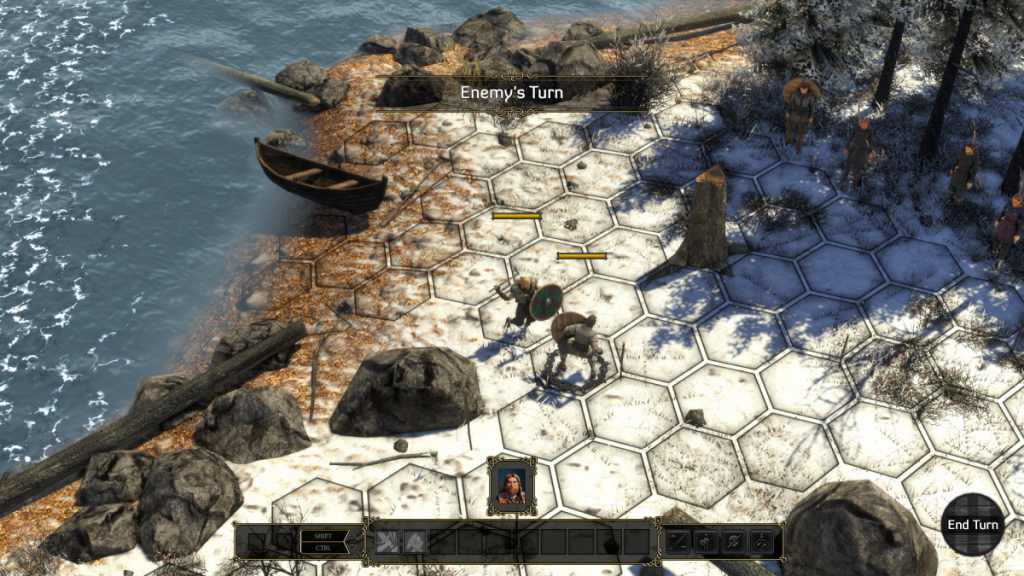 Expeditions: Conquistador was a strange title, combining a hex-based, turn-based combat system built around small skirmishes with a resource system that tied into an over-world map. Players pushed deeper into the tribal reaches of the pre-conquest new world, trading and making alliances to advance the story, support their travelling party,  and, well, get rich or die trying.

The game featured over thirty companions; named, skilled, and placed on a moral compass that could see you coming to blows with them if your behaviours really irked them. There was also a danger of mutiny, should you fail at the semi luck-based camping sections as you travelled the winding paths of Mexico (following an extended tutorial on the island of Hispaniola). Conversation with your allies felt, somewhat incidental, and although the characters each had their own traits -racists despise natives, religious folk unsure why you’re letting off sinners, etc- the conversation with them felt over-written and disconnected from the game world; taking place in it’s own, heavy interface.

Conquistador’s combat scale, six of your units vs the enemy, was wonderful, a return to halcyon days of tactical games like Jagged Alliance & Fallout: Tactics, albeit trapped on a hex-based grid – very similar to Might and Magic. At the time, actually, M&M was the only major title/series that dabbled with that scale of combat, so Conquistador’s rather simple class system was entirely bearable, even if it did feel a little unfinished and shallow as the game went on. Of course, many more games of the sort came along in the years to follow -Banner Saga, Blackguards, Battle Brothers, and a few that didn’t start with B- and pushed focus moreso onto unique feeling heroes, and have really pushed the subgenre along further while the game was experiencing it’s Autumn years.

Despite the impressive combination of a rarely used scale of conflict, a unique setting, and no shortage of content, the game struggled with personality and momentum at times. While the writing was good, characters lacked natural conversation; and so the large gobs of page-long anecdotes were wasted. The game’s overworld section, while certainly clever, was dangerously unforgiving – having to assign characters to salt meat, tend wound, hunt, and guard as to simply keep your team alive – only to suffer ambush after ambush as wounds fester and bones reach poor fettle. Unforgiving is definitely an appropriate word, and while it is beyond doubt that life at the time -regardless of sides- was just that, the game did rather seem to take great joy in stepping on your fingers as you attempted to climb back up to safety. 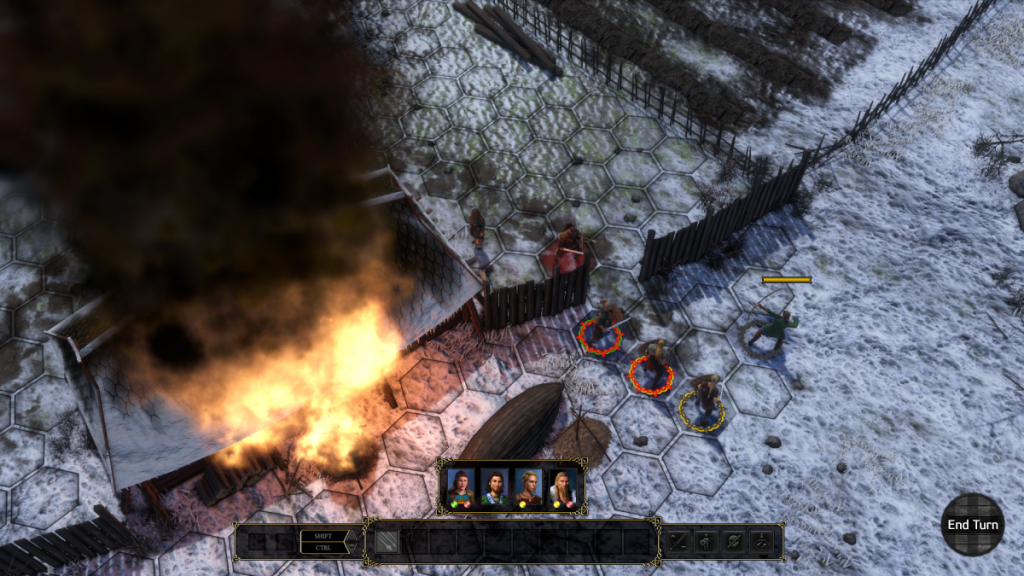 I played around 40 minutes of the next entry in the series, Expeditions: Viking, and I have to say, the team have done an amazing job of not just modernising the previous game’s systems, but addressing every issue I’ve mentioned above; massaging some, and -simply- gutting others.

For a start, you’re not a wealthy, sprightly sort cruising for glory & gold -although there is a bit of that- instead you take on the role of the offspring of a Viking village leader. As it turns out your pa was rather obsessed with chasing repute over the oceans and left the stead in a bad way. Much like conquistador the game is split into two, with the start of the game taking place in the across Denmark, although mainly -from what I’ve seen- in the region of the protagonist’s homestead on the Western coast of Denmark (directly next to Ringkøbing Fjord). The second section, the Mexico to Conquistador’s Hispaniola, is Britain, with the player following in the footsteps of their character’s father’s expeditions.

It’s not just the era, and the map, that have undergone major overhauls. The story completely leads the game, the combat has been changed to be more tactical, and simultaneously feels more forgiving, and the character-count has been shrunk so much that the developers have had room to make them each vastly more memorable; with each of the new main-companions having their own stories, opinions, and origins with your band.

Yes, yes, a lot of that still touches on the core features list of the original, and in that way the game definitely feels right in continuing the series. This feels like both an evolution and finesse on the qualities which were celebrated in the original. Rather -though- than a turn-based tactics game tied together though a luck-based overworld, Vikings actually feels like a part of the CRPG genre, one that actually happens to feature an impressive, in-depth non-fantasy based combat system. 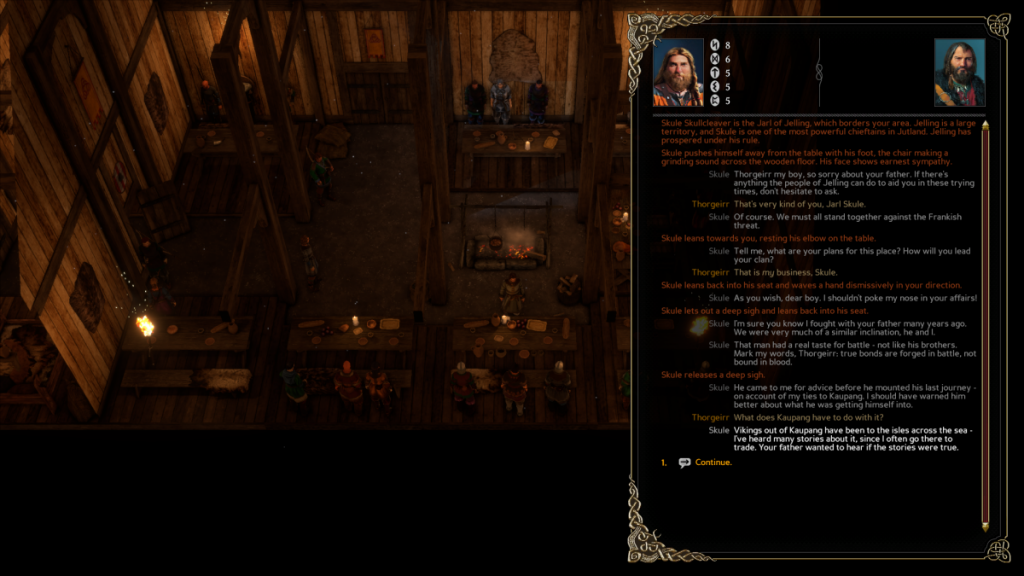 I don’t name check the CRPG genre lightly; choice and inquiry based conversations are the crux of how you’ll interact with your travelling companion, and how you’ll advance quest-lines. You’ll be interrupted by those you’ve chosen to follow you, from the interloper who tried to steal your title, to the foreigner you found hidden amongst starving villagers you first meet when you hit Britannia’s shores, and their conversations and attitude towards you will change based on the actions you’ve taken before.

Indeed, the section that i played through at the PC Gamer Weekender followed the -incidental- recruitment of the second companion I just mentioned.

The group had just arrived on a beach, supplies lost and most of the seaworthy vessels looking rather worse for wear. I actually thought I was in a town-hub, which had featured in the previous game, with players able to walk around freely. In fact, the area featured both friend and foe, with three distinct groups of peoples, each at odds with one-another. It’s a somewhat gimmicky introduction to a new land in games, but it served well at establishing some of the issues that would likely serve as points of conflict in the complete game; poverty, the religion of the new land, and grudge-led rivalries and conflict.

Among the villagers was a monk from a nation you hadn’t long since stopped fighting; through your various interactions you could see them dead, recruited, or -as in my case, and I’ll explain why in a minute- forced into your servitude.

On my first playthrough of the short slice of the game I decided to help both the villagers, and the outlaws by robbing the wealthy convent on the hill – actions certainly more noble than some of the options offered. As I bashed down the doors to the convent and stormed the courtyard the various residents raised arms against me and I struck them down, heading deeper into the hall to secure the haul. No longer welcome with the villagers due to the violence, and unwilling to join me, a conversation option indicated that I could enlist him by force. He let out a maniacal cry as I forced him to join my group. Seeing as I couldn’t go against my personal principles any more I refused to split the wealth with the shell-shocked outlaws, and left for greener pastures. 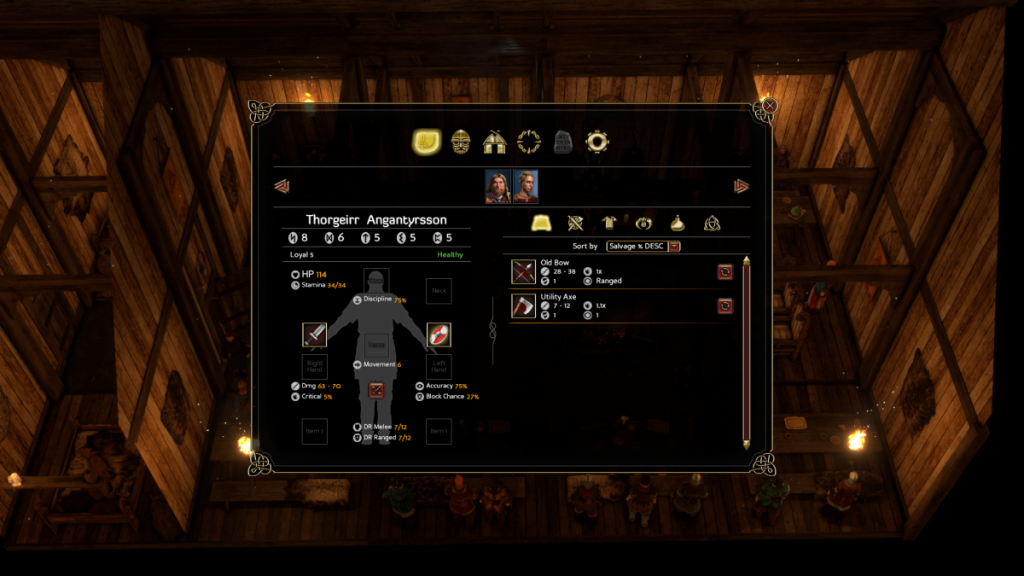 I hadn’t intended for it to go that way; in fact my event compadre for the weekend had in the same fashion as me, found their way to the same solution, however noticed the button on the toolbar that instructed your group to aim to knock-out rather than kill. Those same, last five minutes played out very differently for him. He had the chance to take on the follower I’d desired, but turned them down, and he happily split the wealth with the outlaws. All three factions were, at least for the moment, temporarily at peace due to a kindly thayn redistributing wealth.

There’s also the fact that all three of those factions can ultimately take the blame for the misfortune of others in that situation, and this is just one small section among two sweeping campaigns that see you defending your land from Norweigians, and on fighting off other vikings and playing both the Northumbrians and Picts against one another as you explore the new land of Britannia.

Combat already feels as though it will feel a lot more personal and involving because of the attachments you’ll have with the story companions, but, it’s also the fact that the GUI is a whole lot larger, and more approachable. Each character feels more unique due to the fact they are clad in brighter colours than the silvers and black of Conquistador. Finally, the weapon selection is vastly more generous due to the game’s pre-gunpowder setting, meaning polearms and bows form your rear, and a whole variety of bladed and blunt weapons (each with multiple uses) form your front. With wider maps, and no sniping riflemen,  the game retains the series’ focus on tactical manoeuvres.

The full game launches in late April, on the 27th, there’s several things yet to be confirmed about the game; launch price, scope of campaign, and also more information on the regularly teased ability to recruit player-created characters to your warband. Still, with nearly two full months left until release there’s ample time for the developers to reveal more details on the game.