I am going to start this review off with the fact that I have never seen Jurassic Park, the original movie. I have, however, played on a Jurassic Park themed pinball table, and members of our group really like the movie, so we figured we’d take a go at Jurassic Park Danger — a board game that seems to be heavily inspired by the movie itself.

Jurassic Park Danger! is a two to five player game, rated for ages 10 and up, which takes around 50 minutes to complete. This game has two different player types — the dinosaurs (which one player controls) and the humans (which the rest of the players become). The dinosaurs are competing against the humans, looking to eat them all so that they cannot escape the map. But, before we get into gameplay, we should talk about the set up. 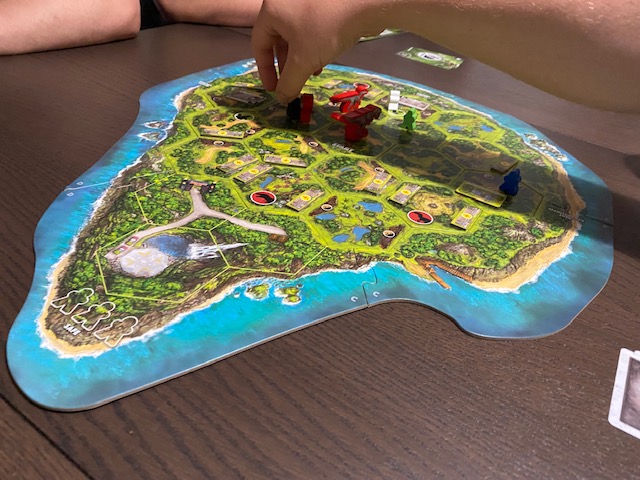 The board itself is a puzzle — allowing you to create an outline of the island. Then, you will see yourself shuffling a bunch of hexagon tiles, each labeled to tell you what ‘ring’ of the map they go on. There is an outer ring, an inner ring, and then the START tile in the very center. Creating the map this way ensures that the environment is different each and every time you play, which is a very clever and interesting way to make the map. There are three stations that are always at the same place in the map, represented by tiles that go on top of the map tile itself.

The players can choose from a selection of different people from the movie — John Hammon, Dr Grant, Lex Murphy, etc. The actor is printed on the character sheet and on that character’s deck of cards, to help show who you are playing. Each of these characters also have their own action, which can help with your turn. Humans are looking to call the helicopter by activating all three of the buildings on the map, and then getting to the helicopter to leave. 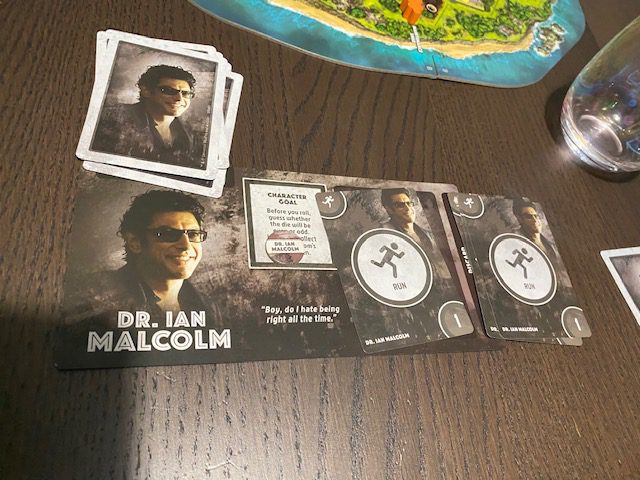 It’s not as easy as just making your way to an activated helicopter in Jurassic Park Danger — each character has its own goal that needs to be met on the island before they are able to leave. Dr. Ellie Sattler, for example, needs to go to the Triceratops location on the map, to collect her token, while Donald Gennaro starts with his goal token, but it needs to be discarded if he is attacked by a dinosaur, making him unable to get to the helicopter at all. Humans do win if a set number of characters make it to the helicopter, and if your character dies (or makes it to the helicopter), you can just pick up a new character and start again from the middle of the map.

The dinosaur player also gets their own player card, deck, and also has three dinosaurs to march around the map. These dinosaurs give the player three action choices, and you can take one of these actions on your turn, every turn. These actions are really key in the dinosaurs winning — you will want to use an action every single turn to help eliminate the pesky humans that are running around your otherwise perfect island. 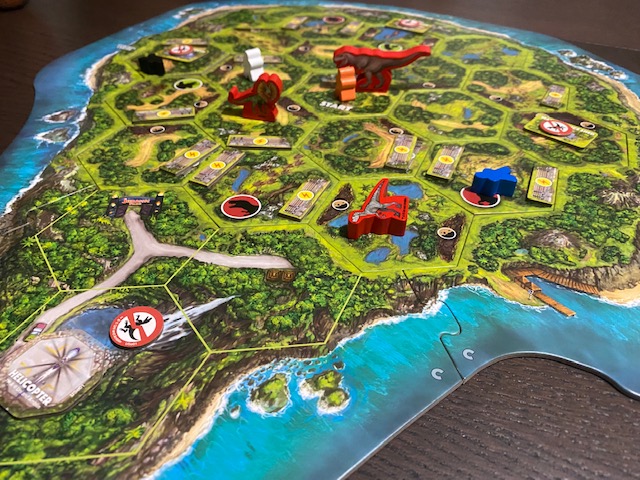 Play itself is pretty simple in Jurassic Park Danger — in order to move your character or do anything, really, you need to select a card from your hand and put it face down on your player card. When it’s the humans turn, these cards will be turned over and everyone will take their actions. Players can climb over fences/omountains with climb, sneak allows them to lay their meeple down so that dinos can’t see them, then the next turn they can move to an adjacent tile, they can run or use a special card. Depending on the player, there are different special cards that can interact with the various stations on the map or otherwise change the gameplay.

Players only have one action to use each turn, and some of them — like sneak — require a dice roll to see if you can actually accomplish the move, giving a bit of risk into the game. There are a few cards that can be played without using the human’s action, however, it’s tricky to know when. Your cards actually act a bit like your health — you will need to discard them after your turn. To get your discards back, you need to get rid of one of your cards, permanently, as a trade. When dinosaurs attack you, you will also get rid of a card permanently, and when your hand has run out, you’ve died. 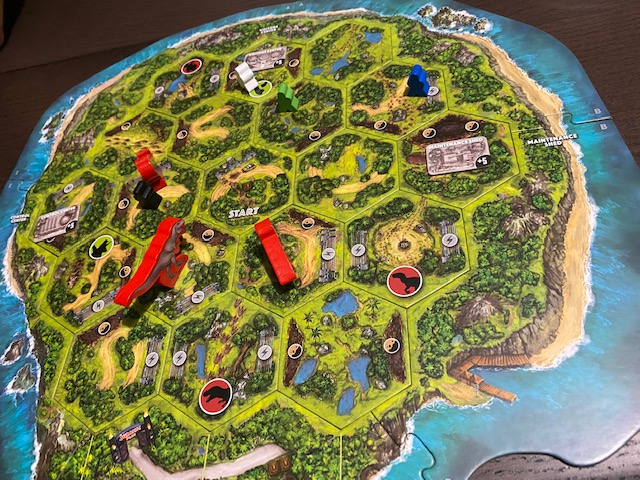 Dinosaurs have their own deck of cards, however, their cards have more than one action on each card (which makes sense, as there are more than one dinosaur on the map), though each action can only happen to one dinosaur, meaning you can’t move the same dinosaur several times, using all of the actions on the card. These dinosaurs have their own abilities, which again, really need to be utilized if you want to take on the massive amount of people on the board. You can’t be afraid to start running around and chomping them!

When you do start getting into Jurassic Park Danger, you will find the map does change. One of the stations activates electric fences, which will change how you move around the map. You can add tokens that prevent dinosaurs from entering areas, once you have unlocked that, and flip over tiles as stations are activated.

Jurassic Park Danger is a really fun game when it comes to the pieces and the map itself. We were all really impressed with building the puzzle and the environment that you need to make your way around. As our dinosaurs didn’t actually use their actions at first, the game did feel a bit unfair, but once it was going and in flow, it became more clear on how to keep the dinosaurs ahead. Even with these actions, there still wasn’t much variety for the dinosaurs themselves, which makes it less of a fun character as a human, who can not only play another player later in the game but also has a lot of differences between their actions and special cards. 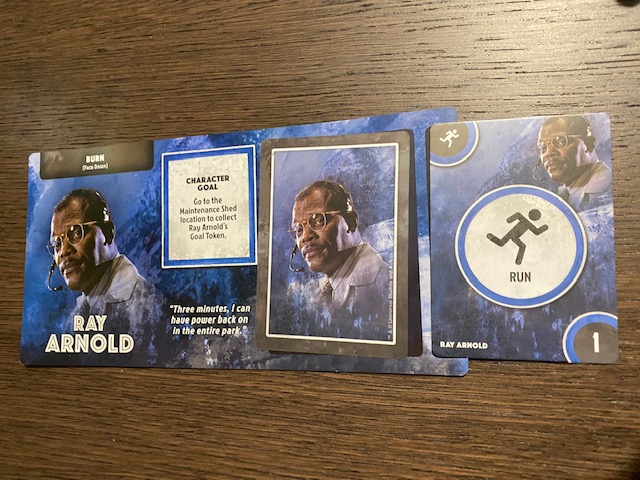 The theme of the movie is really strong throughout the game, which I do feel is a big plus, especially if you have watched the movie and enjoy it. Also, who doesn’t love a good escape from dinosaurs? At the end of the game, even though the humans did have more fun than the dinosaurs, we did enjoy the game.

You can find Jurassic Park Danger! on Amazon.