In Dice Forge, players roll dice to collect gold, victory points and Sun and Moon Shards, but the two dice that you’ll begin the game with are not those you’ll end with – this is a dice crafting game after all.

Dice crafting is really as simple as it sounds, and whilst it seems like an obvious mechanic for designers to go after, it has been implemented very infrequently. The only prior example that I’m aware of is Rattlebones, although I’ve never played it. In Dice Forge, the mechanic is implemented extremely well, and it is supported by a truly exceptional box insert, which may even be better than that of Quadropolis, which I recently gushed over in this review. 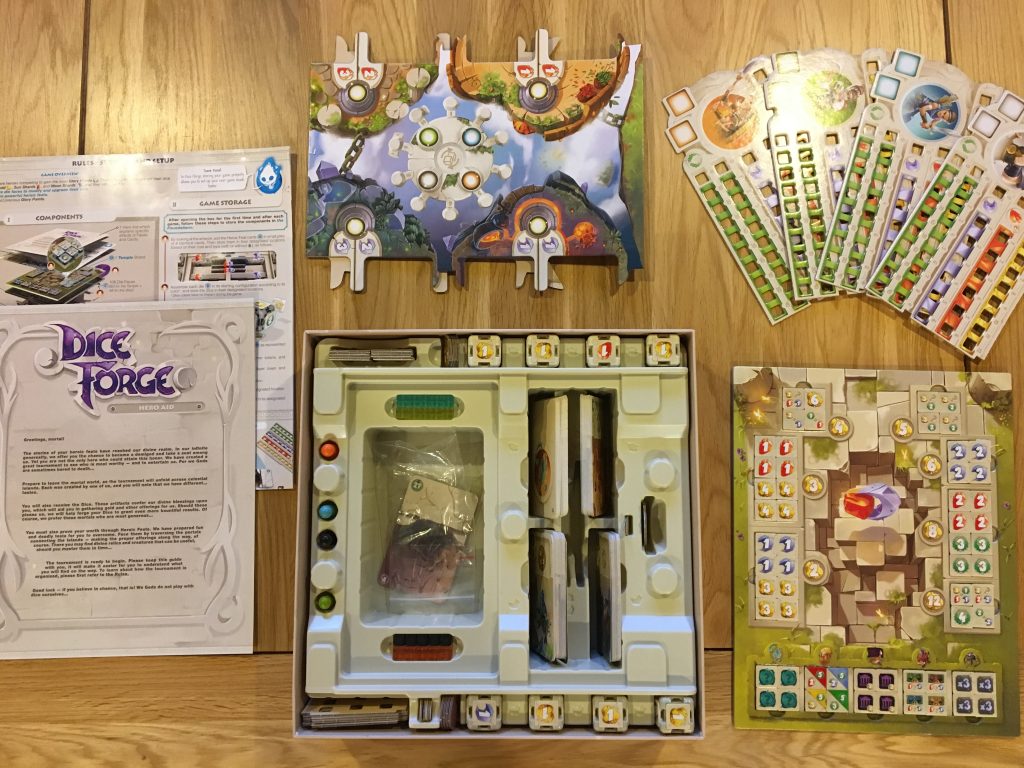 The active player simply rolls their two dice, each of which has a fixed configuration at the beginning of the game as indicated in a slightly daunting but ultimately quite informative fold out setup guide. Depending on the outcome of the roll, the player then adds a number of resources into their player track using translucent cubes. They may then take an action, which is basically a choice between buying a new die face (using gold) from a beautifully designed board called The Temple, or they can take a Heroic Feat card from the actual game board (by paying Sun and Moon Shards.)

If players take a die face, they must then add it to either of their dice by prying off one of the existing faces and replacing it with the face that they purchase. In a slightly messy (but absolutely unavoidable) design Feature, removed die faces must then be reserved nearby so that the die can be rebuilt to its original specification at the end of the game. Should the player choose to undertake a Heroic Feat, they move their pawn to the corresponding board slot, pay the relevant cost in Sun and Moon Shards, and draw the card that represents the Heroic Feat that they have undertaken. 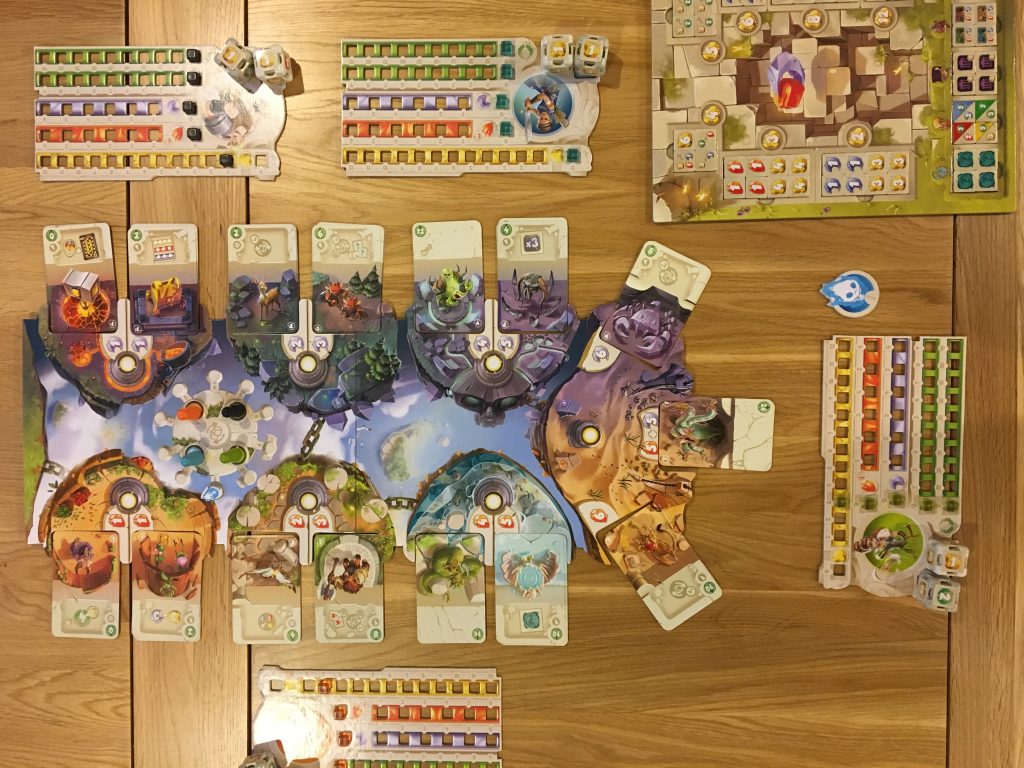 There are four of each Heroic Feat card, and because Dice Forge is a two to four player game, there is therefore no chance that any one player won’t have access to a given Heroic Feat. I did wonder if the game might have been a bit more strategic if there were perhaps only one or two of each (depending on player count) but that could simply be introduced as a house rule. I suspect the real reason why this rule hasn’t been formally introduced is because Dice Forge is quite a light game which is already highly dependent on luck.

On the subject of Heroic Feats, it seems a sensible time to talk about the theming in Dice Forge. The board itself is a narrow, sculpted board that folds out into a kind of long, thin track. It has slots all around the edges to slide the Heroic Feat cards into, and the artwork is designed to match seamlessly. All of the art is kind of euro-cartoony, and it is really, really beautiful. It’s designed to represent some kind of journey through what appears to be Greek mythology, and the Heroic Feat cards Feature images of Cyclops, Minotaurs and Medusa. 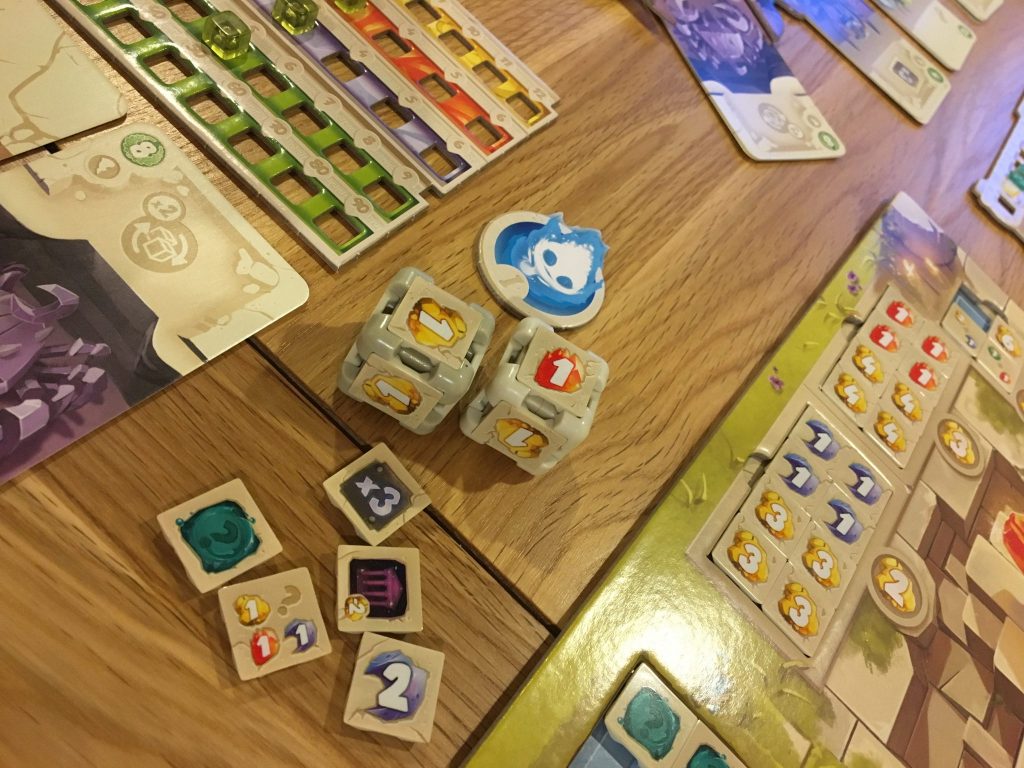 Linked to the theming are the other components. The Temple which holds the spare die faces is beautifully designed, with indented slots for the unused die faces. Between games, The Temple has a kind of sleeve that it slots into, meaning that it can be set up before storing, and played immediately upon opening. Player cards are also styled around heroes such as Hercules and Perseus, although that is never said, so it’s my own interpretation of the artwork.

Whilst I think the artwork is absolutely beautiful and the component quality is exceptionally high, the theme is almost completely throwaway. This could just as easily be a game in which players battled zombies, built a global shipping company or just about anything else. Regardless of any overthinking it, what the theme does do exceptionally well is appeal to younger players. My eldest daughter is still too young to play in a meaningful way, but she loved rolling the dice for me and just looking at the cartoon images when we bought Heroic Feats together. I would think that from about age six or seven, Dice Forge would really bring families together. 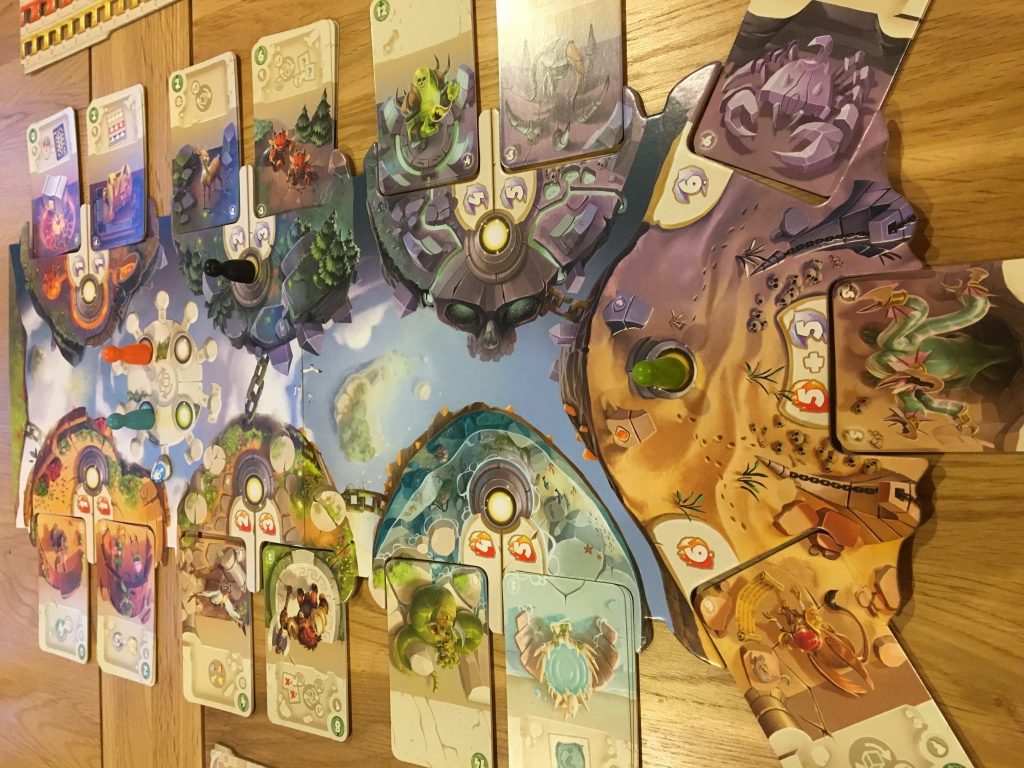 Moving back to game mechanics, I should mention that ultimately, players will complete nine or ten rounds (depending on player count) and are aiming to collect victory points. There are die faces that add victory points, but they are also provided by completing Heroic Feats. Heroic Feats also add other benefits such as additional rolls, but the main thing to note is that the more Sun and/or Moon Shards a Heroic Feat costs, the more victory points it is worth.

Dice Forge feels quite fun to play because it is so straightforward and attractive, and although nine or ten rounds is probably one or two too many, each turn is over quickly. Players simply roll their dice, track resources and take a simple action. It is possible to pay two Sun Shards to take a second action, but that hardly delays things. 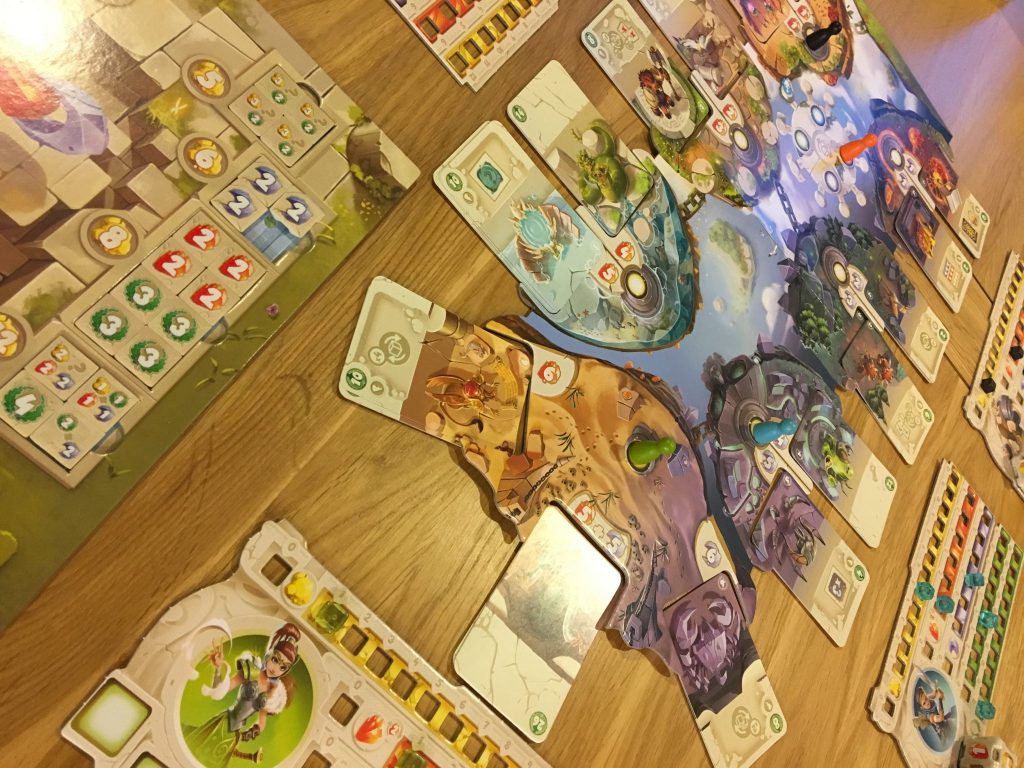 Despite the fun factor, interaction between players is very low. When you move your pawn onto the same space as another player, that player is “ousted” back to the starting portal, but there is no penalty for that, and in fact, the ousted player is then able to reroll their dice and take any benefits. Strategically minded players will therefore avoid that interaction if they can. There is one die face that you can add to an opponent’s dice, causing them to roll resources for you, but it’s just one among a lot, and based on my interpretation of the rules, they can just buy another face and remove it.

On that final note about rules, I have mixed feelings about how Dice Forge instructs players. The fold out setup guide takes a few minutes to come to terms with because it has so much information, presented so boldly, that it simply overwhelms. Once you come to terms with it, it’s quite effective and you will get the game setup quickly. The next problem comes when you need to understand what symbols on Heroic Feat cards mean, or to interpret subtle rules. For example, does a picture of a die falling mean a reroll, or a new roll? Do you take the benefit of the first roll and the second, or just the reroll? These ambiguities do kind of come together as you play, but it would be nice to have a more straightforward, written interpretation sat alongside the pretty drawings. 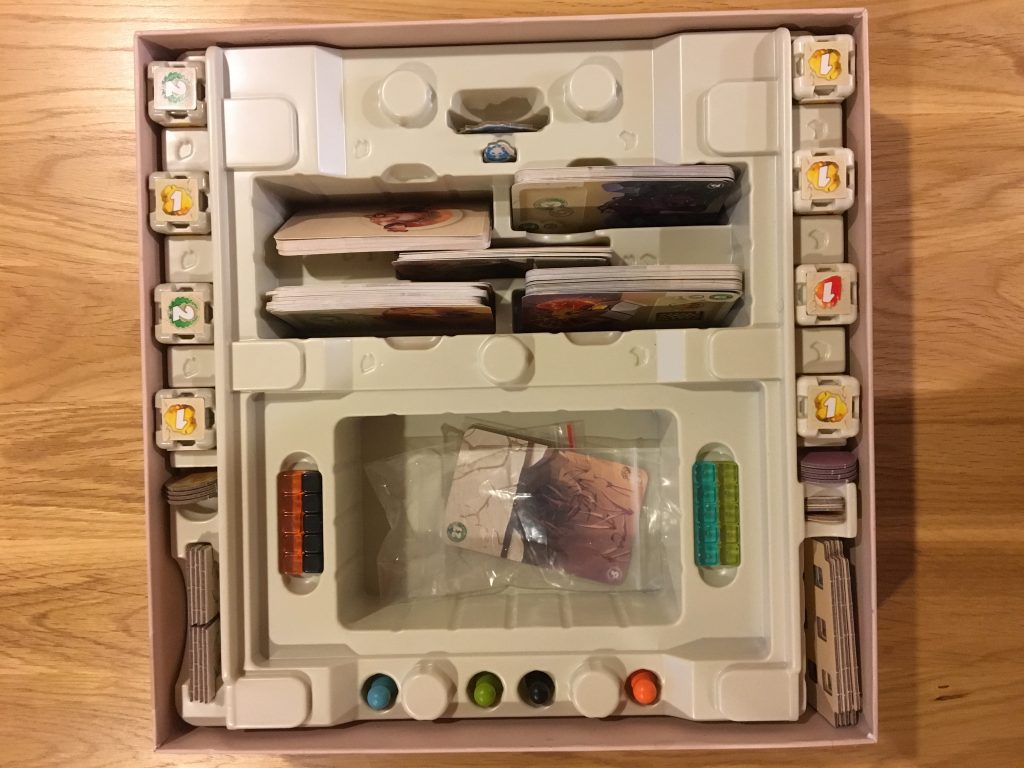 I really enjoyed playing Dice Forge with either two or four players, all of which were adults, but it is perhaps the single game that I am most excited about for when my daughters are older. The prospect of playing Scythe, Century: Spice Road or Warhammer 40k seems a long way off, but Dice Forge seems much closer. I’m not saying that it’s a kid’s game, but it’s a very fun game, it looks very pretty and you get a lot of very tactile stuff to play with. It’s a really easy game to setup and play once you get going, and the box isn’t overly large so it feels like an excellent family game for a Summer holiday in a caravan, for example.

As a result of the low price, the exceptional component and art quality and the fun, family friendly content, I do recommend Dice Forge, just be aware that there is relatively little depth here, and the theme isn’t heavily integrated with the gameplay. You may also feel dismally unlucky if you roll resources that you don’t want (although the flipside is that you will always roll something.) Set your expectations correctly however, and this is a game anyone can have fun with.

A copy of Dice Forge was provided for review purposes. the game can be purchased via 365 Games or through one of the shops found in this handy Store Locator.