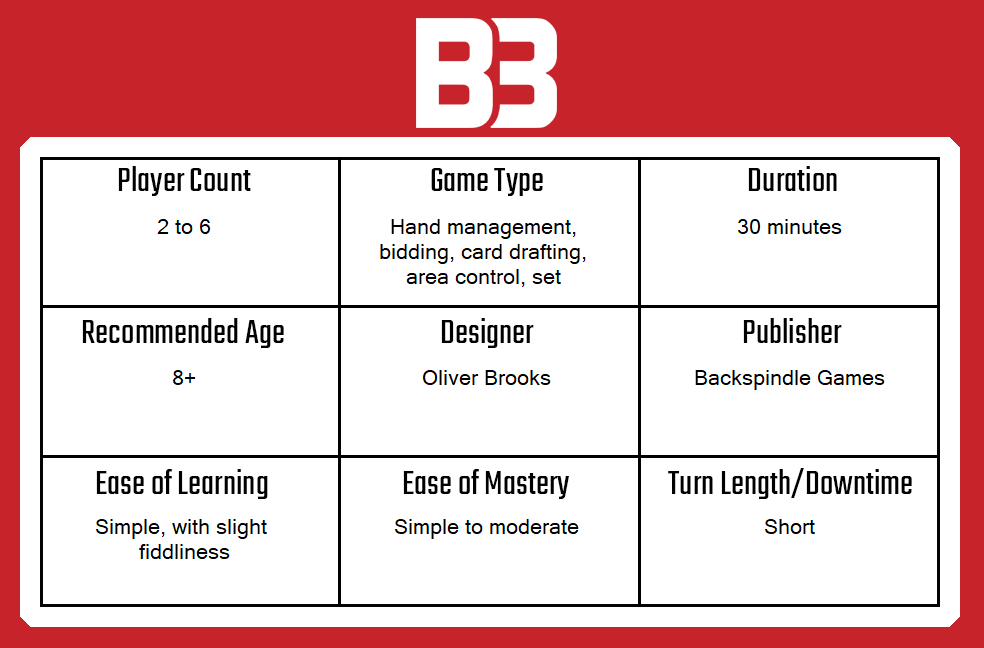 Dance of the Fireflies is a 2-6 player card game in which players, striving to be the next royal gardener, bid on flowers around a sundial in an attempt to create the most beautiful gardens and win the coveted title. Despite the attractive and apparently soothing theme, Dance of the Fireflies is a game of trickery and deception that layers a number of simple card mechanics over the top of an appealing table presence centred around a sundial. 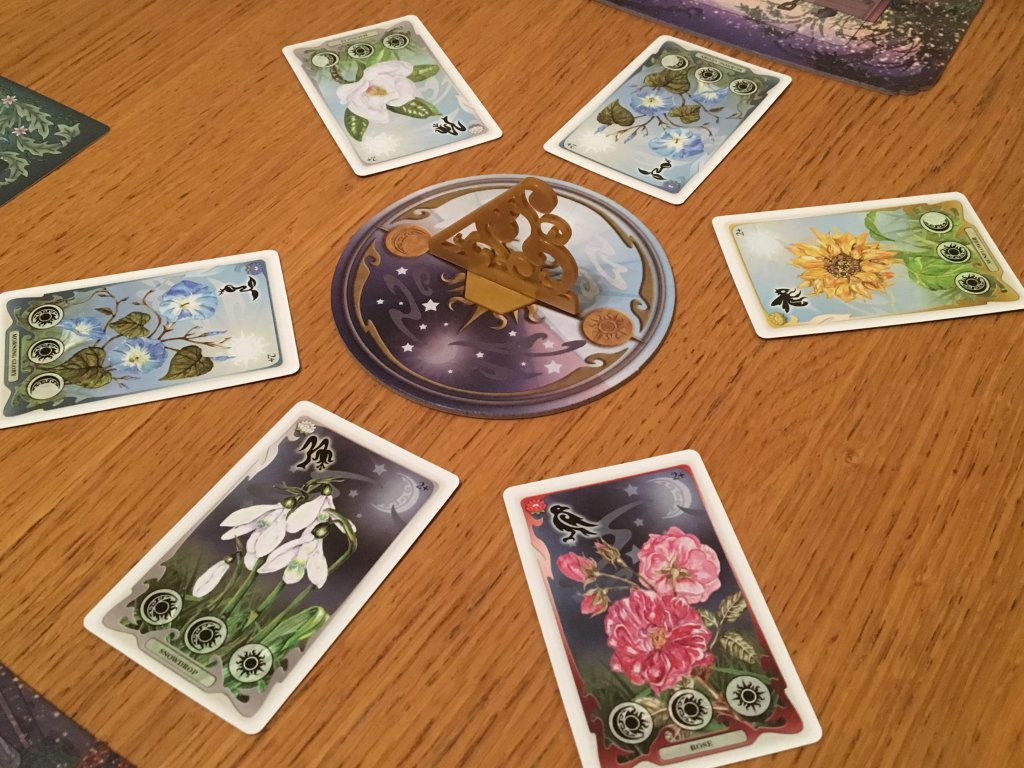 The objective of Dance of the Fireflies is simply to create the most impressive garden, which is achieved by bidding to draft cards from a shared pool. That shared pool is placed around a sundial in a specific way so that half of the cards are on each of the night and day sides of the sundial. Bids may only be placed on cards where the leftmost available symbol matches the current time of day or night and as each round of bidding ends, the sundial turns.

When it does turn, any cards that are directly aligned to either the sunrise or sunset positions on the dial are resolved — meaning that whoever has the highest bid (taking into account any royal fireflies that were placed) may take the card. In game play terms, creating the most impressive garden is all about getting a flower from each of the six colours into your garden, which can contain up to three sets — no set can contain two of the same colour card and there are escalating bonuses for having as much variety as possible.

Each time a card is planted (which is a free action if done immediately after a flower is harvested) then a special action associated with cards of that colour can be taken. For example, when a red flower is planted, the player may take draw two cards into their hand and must then discard one. Blue flowers allow the player to search the compost bin for a card of their choice, which they may then keep.

There are several more rules that support the basic structure and it is probably among them that Dance of the Fireflies transforms itself from being rather straightforward to something more strategically challenging. There are several ways to influence opponents both directly and indirectly and there is certainly more potential for confrontation than I was expecting. I’ll explain more on those elements as we continue. Firstly, a brief word on the components in Dance of the Fireflies. The game comes in a small, stocky box that features the beautiful artwork you can see throughout this review and given that the game retails for less than twenty pounds, it offers extremely good value. The manual is printed in glossy, full colour and it features a number of pictures and examples that make learning the game relatively straightforward to learn. Six player cards printed on firm card further enhance the experience.

The sundial is made from plastic and card and is a very nice inclusion, whilst the fireflies themselves are represented by wooden disks of six different colours. The main component in the game is probably the cards. The deck features beautifully painted artwork for each of the six flowers as well as a seventh plant, the Orchid/Weed card (which I’ll explain later) all of which are nice quality and look great when laid out on the table.

Finally, there are cardboard pieces for The Potting shed, the Compost Bin and the Gardeners Apprentice token which act respectively as a draw deck, discard pile and first player token. Dance of the Fireflies has a fantastic and more or less unique visual style that catches the attention and links very nicely with the game play. 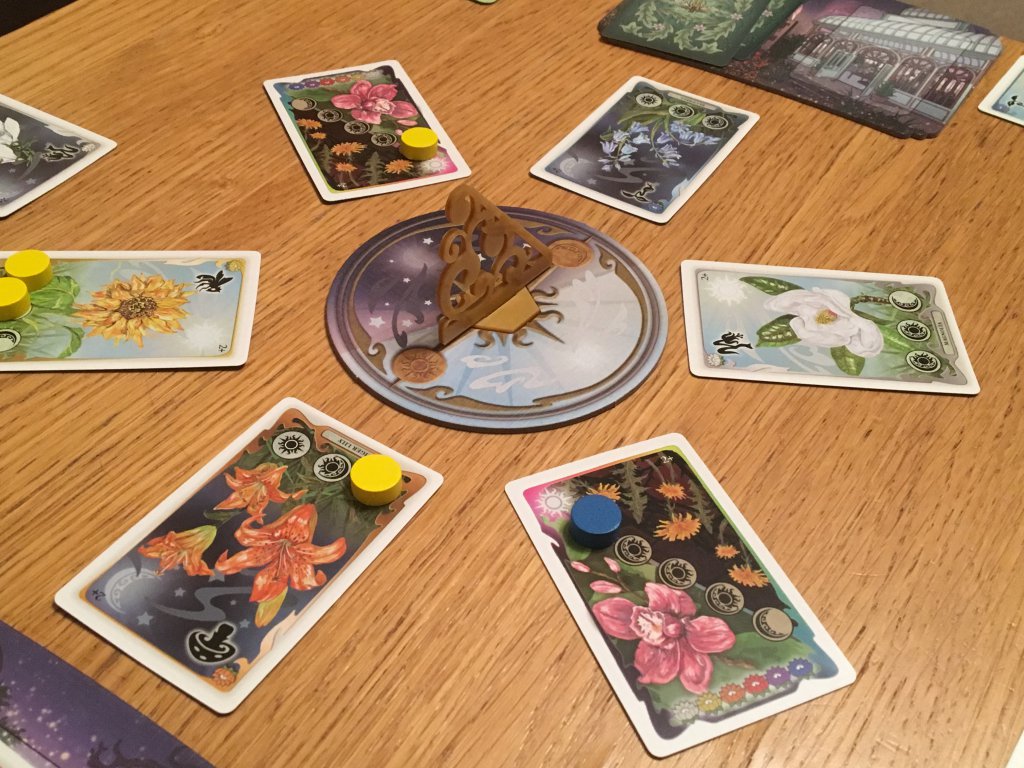 Structurally, Dance of the Fireflies is very straightforward, although as I keep hinting, there are occasional nuances that make it more complex. Each round of play is split into two phases; The Planting Phase and the Harvesting Phase.

In The Planting Phase, the player with the Gardener’s Apprentice token acts first and may either bid a firefly onto one of the eligible flower cards, or place a flower card from her hand into her garden — if she chooses to plant, she must place one of her fireflies onto the planted flower, which means that it cannot be used for bidding for the rest of the game. Whichever action she chooses, the player may also take the option of placing a bonus firefly, but only if she is willing to discard one of the flower cards that she is holding — players always draw up to three cards at the end of their turn, so this is a temporary setback rather than a permanent one.

Once all players have taken part in The Planting Phase, the sundial turns one step clockwise. Whenever the sunrise or sunset symbols on the sundial align to a flower with the matching symbol, that flower will be taken by the winning bidder and all fireflies (except royals) return to their owners. Royal fireflies are placed on the sundial face down and will be unavailable for two turns of the clock.

Assuming that one or more cards are won by one of the players, then she will take it and plant it in her garden. As I mentioned before, each garden can accommodate up to three sets of six flower cards, where each set must contain one of each flower. If an Orchid/Weed plant is won from the sundial, then it can either be taken as an orchid (which is planted in your garden as a flower of any other colour) or as a weed, which is planted in an opponents garden to take up a slot.

Whenever a card is planted face up, it’s special effect triggers immediately and can be resolved. Sometimes this involves new cards being drawn or fireflies being placed onto the sundial, whilst the purple flowers, for example, provide bonus points. Plants may also be placed into gardens face down, which means that their special abilities will only be resolved at the end of the game — I didn’t see that tactic used very often, but I can imagine it being useful when play reaches a more competitive level. 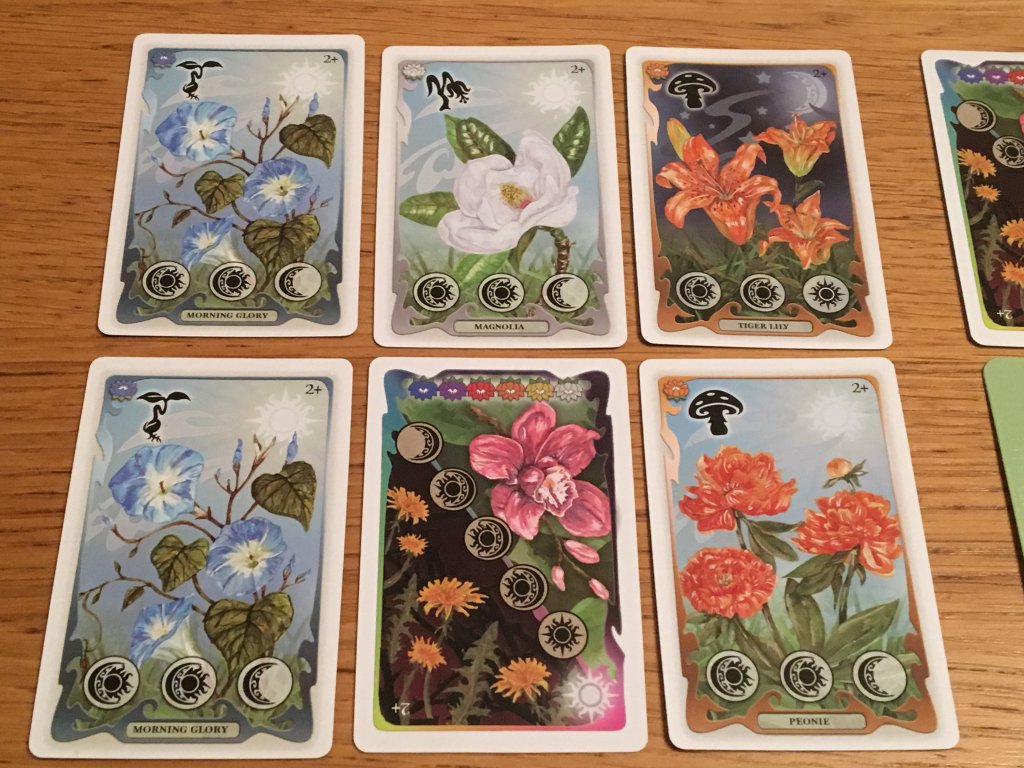 Firstly, Dance of the Fireflies is relatively easy to set up and despite a slightly unusual game concept, it’s fairly simple to learn and play once you get used to its constituent parts. Most learning games can be completed in perhaps thirty minutes (which is fantastic) and any new players will likely pick up on some of the more complex strategies by about halfway through. In the next game, they’ll be executing them from the very beginning!

It is really those more complex strategies that elevate Dance of the Fireflies from being simply an attractive and well made drafting and set collection game to something that is far more interesting. Yes, this is a game that fundamentally asks players to bid on cards and then collect them in sets to achieve victory points, but it wraps a lot of visual and mechanical theme around that ask, to the extent that it is almost completely abstracted.

In the hope that I’ve been able to basically articulate how the game works, let me now attempt to explain what some of these more interesting tactics are. For starters, the bidding itself is extremely competitive because unless they choose to plant cards from their hand often, it’s rare to run out of fireflies simply through bidding. Locking players out of cards you want is hugely important, as is sniping for cards right before the clock turns.

Both of these tactics rely on retaining an understanding of how the night and day cycle affects which cards can be bid on and when they’ll be resolved. That said, only the Orchid/Weed flower has five firefly slots on it, whilst the others have three — if you fail to act soon enough, you may miss your opportunity. Placing weeds into an opponents garden is also a tough decision — what will be more valuable in final scoring? Finishing or expanding your own garden, or scuppering an opponents.

Of course, there’s also the royal fireflies, which I note I have yet to explain. A royal firefly is placed face down and in secret, but it can trump any number of regular fireflies. There is a risk, however, that an opponent will have already placed their royal firefly on a card that you also want, which means the two will nullify each other. As I mentioned earlier, whenever a royal firefly is used, it moves to the central dial for two turns, which means wasting them can be quite painful — making your opponent waste one is as sweet as honey, however! 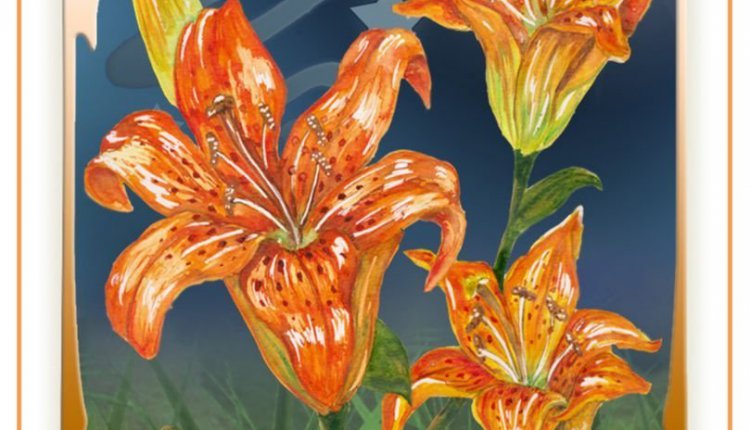 Ultimately somewhere between the beautiful artwork and the thematic, whimsical game play (which feels intentionally mischievous, much like the dryads and pixies depicted throughout) Dance of the Fireflies has real charm. It does a fantastic job of taking a relatively straightforward set collection concept and wrapping some very interesting mechanics around it — the bidding system, the sundial, the card abilities and the limitations on how plants can be placed and then scored. It’s a very smart game, overall. With all of these positives in mind, I highly recommend Dance of the Fireflies as a game that is well worth considering if it sounds like something you might enjoy.