A straightforward concept with simple components manages to deliver a bevy of combinations in the Dale of Merchants series.

As readers with a good memory will recall, we recently covered the Dale of Merchants Collection, which has just been successfully Kickstarted. In the original Dale of Merchants and its sequel, players could choose decks of beautifully drawn, anthropomorphic tribes to include in their game, then work to secure tricks based on the different rule-breaking conditions of each tribe. Dale of Merchants features a straightforward concept and simple components, but there’s more to it than meets the eye — find out what it’s all about in our detailed review.

In Dale of Merchants (which I’ll refer to in plural, since each one has the same objective) each player must simply set out their stall to feature eight separate stacks of cards, each of which must ascend one point in value from one at the beginning to eight at the end. To do this, they’ll draft-purchase different animal-folk cards based on the tribes selected and add them to their hand, before placing the piles as and when complete.

Whilst this concept is simple, there are a few rules to follow and things to consider. For example, players start the game with a handful of junk and a few one-value cards, rather than anything meaningful. This means that the first few turns will be spent trading junk in for more valuable cards from the marketplace, then perhaps by playing those cards for the techniques listed on them to gain further benefits that help to build out a viable deck. There is a fine balance in Dale of Merchants to be found between building stalls as quickly as possible and using techniques to maximum effect.

To achieve their objectives, players have four actions available to them each turn and must choose one of them (unless they gain a bonus action, which I’ll explain in a moment). The first of these is the buy action, which simply involves discarding a number of junk or animal-folk cards with a total value that is equal to the card you wish to buy, then adding the new card to your hand (not your discard, as in most similar games).

The second action is to use the technique shown on one card — which usually differs thematically by animal-folk tribe. One card, for example, lets the player who uses its technique dump their entire hand and redraw it. Another lets them copy another technique that has already been used. Some of these cards also show a plus symbol; if such a card is used for its technique, the player will be able to take another action.

The third and fourth actions are relatively straightforward. The third is to actually build a stall, which must be a value of one greater than the previously built stack. On the first turn, for example, it would be permissible (and possible) to build a one-value stall with one of your starting animals. The next stall would need to be exactly two value, then three, then four — all the way up to eight. The animal-folk cards that make up the composition of each stack are irrelevant, so you can mix and match as needed.

The last action is simply to discard any number of cards into a personal discard pile, which is something you might do if you held all junk and needed higher value cards, for example. After their action is resolved, the active player goes through a simple cleanup phase. This involves redrawing up to five cards, then sliding any remaining animal folk down the marketplace and drawing the next card from the deck. 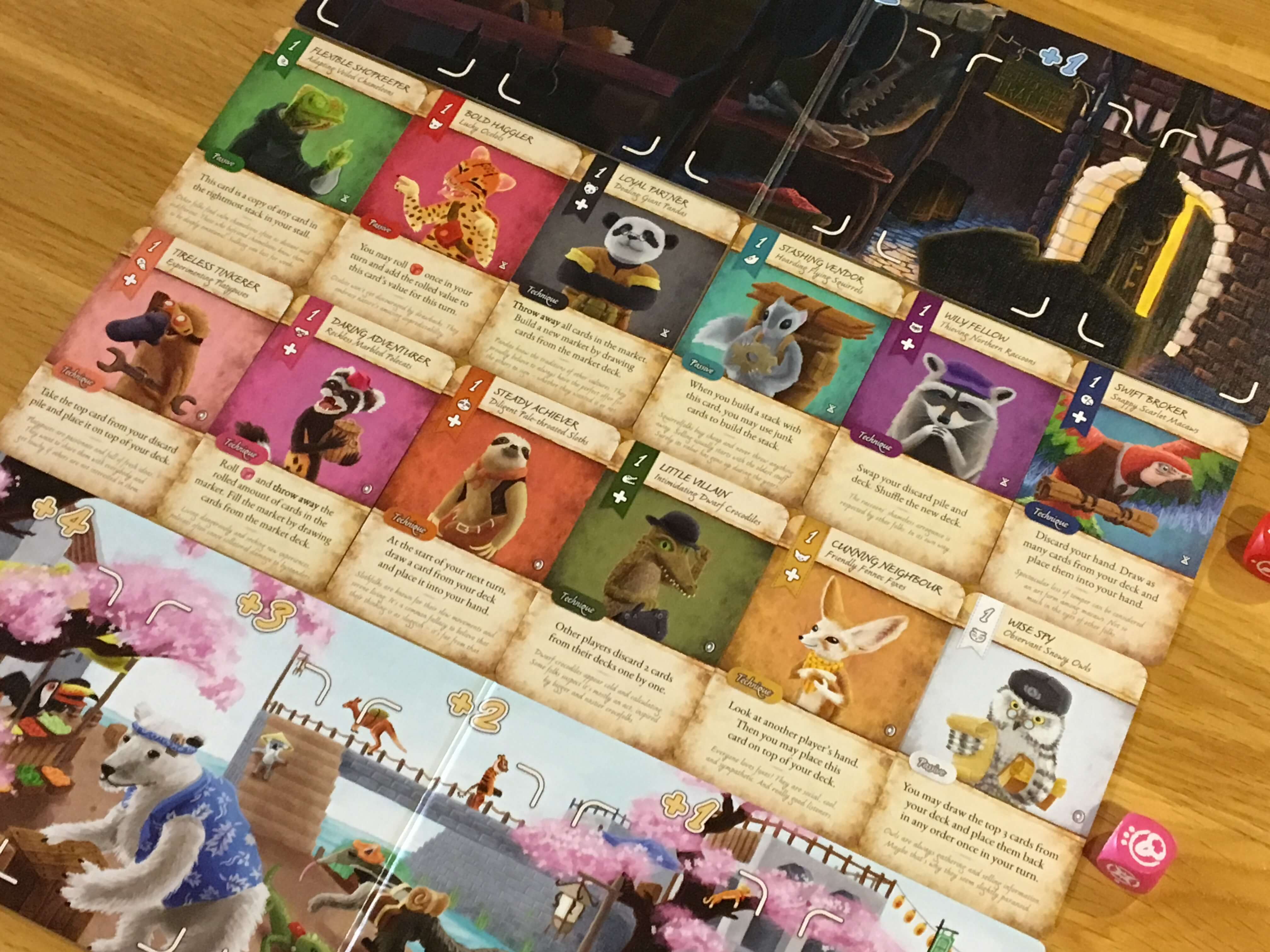 The components in Dale of Merchants are, without doubt, very beautiful. Both the first and second game come in uniformly sized, small boxes that will sit inconspicuously on any shelf. Each has its own thematic artwork on the box and on the marketplace board. Each has six decks of animal-folk cards as well as enough junk cards to support setup for up to four players, so by combining the two games and tweaking the rules a bit, you could have an eight-player game that uses ten animal-folk tribes.

As it stands in the base game, you’ll only ever use five tribes at most (in a four-player game), so even if you only buy one of the Dale of Merchant games, there will always be one tribe left out. By combining both games (and considering that there are many more tribes in the upcoming Collection, plus at least one promo tribe that I know of) there’s almost limitless potential for variation at four or fewer players. This interchangeability is one of my favourite things about the Dale of Merchants games, because each animal-folk tribe does have a unique theme and way of playing that is fun to explore.

The art quality is very high on both the cards and the marketplace boards, as well as in the manual. The quality of the written instruction booklets is fairly high, although I will admit that it took me a few reads to really understand how the game worked. Whether this is a translation issue or just me being a bit dense is up for debate, because as soon as you get the hang of it, Dale of Merchants is a very simple game. 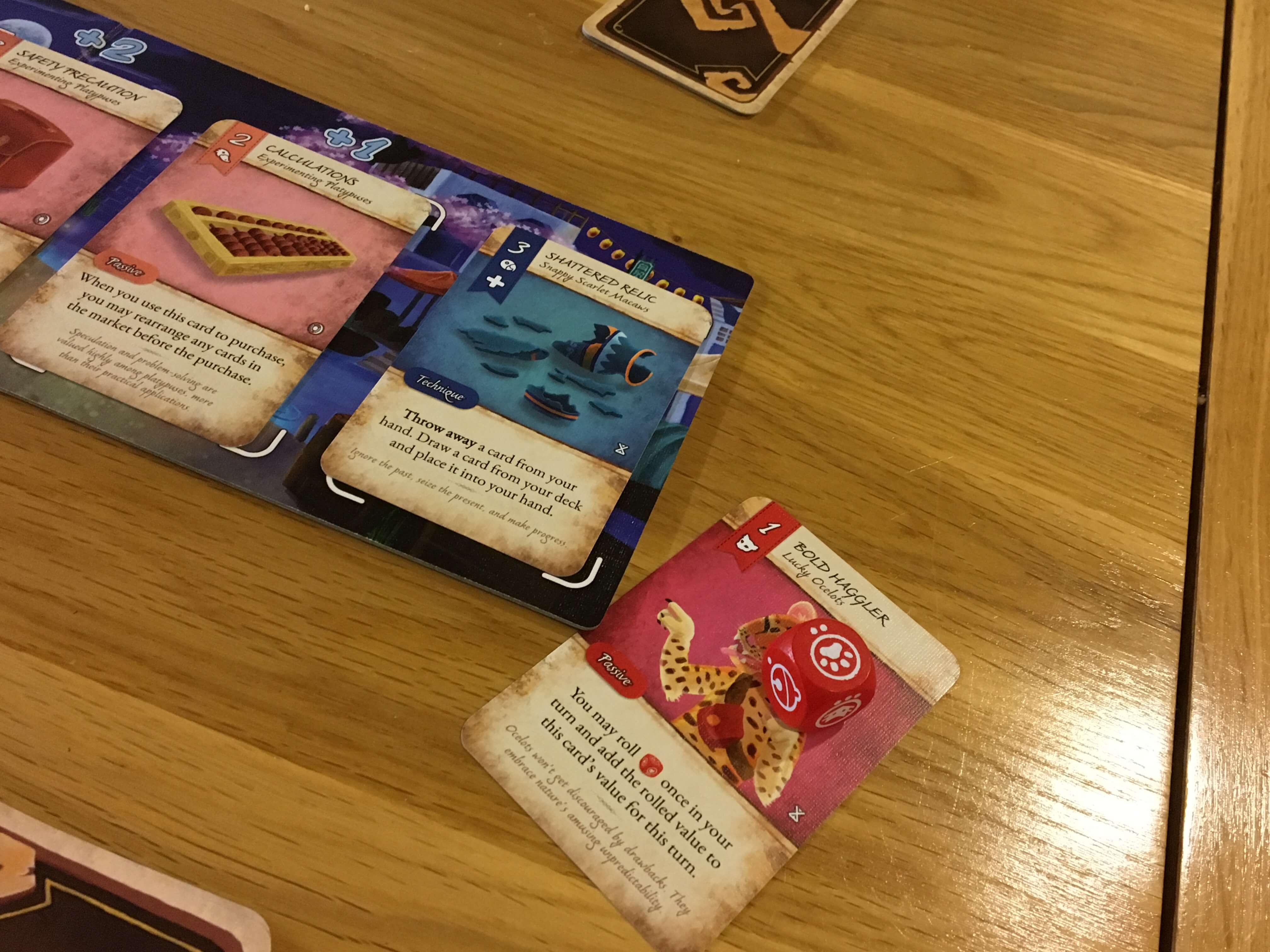 As I mentioned above, the replay factor Dale of Merchants brings with it is very appealing, as is the fact that it has already been expanded several times to ensure there’s plenty of content. There’s also a versatility factor here — you could easily take your favourite six or seven tribes inside a very small box, effectively making Dale of Merchants into a travel game.

None of this would matter, of course, if the gameplay was rubbish, but far from it — Dale of Merchants is very fun, surprisingly interactive (depending on the tribes in play) and quite closely competitive. It’s very, very rare for one player to gain a material advantage over their opponents simply through luck, so the wins can usually be traced back to one or two specific moments that will result in much debate, discussion and, usually, laughter.

This balance (plus its general demeanour when played) means that Dale of Merchants supports a good range of player abilities and ages. I’ve played Dale of Merchants as a brief introduction to game night with some very experienced gamers, but I’ve also played it with children and friends who have never played a game like it before. Dale of Merchants has an easygoing charm that everyone can get along with, that never offends or forces conflict, yet some of the cards do allow cheeky or playful interactions with the other players.

You’ll struggle to find a better small-box, straightforward card game that is as attractive and charming as Dale of Merchants is. Perhaps it could be heavier, perhaps it could have more direct confrontation between players, but in all honesty I wouldn’t change a thing about it. A game as expandable as this might simply benefit from having a couple of decks introduced that have even more interaction — which indeed might come when Collection is released.

The speed of setup is slightly off-putting since the tribe decks have to be sorted and counted based on the number of players, but even that only takes five minutes. From there on, the game is simple to teach and very fast to play, with simple rules and straightforward turns. It’s an awesome addition to any collection that wants an enjoyable, lighter game, a travel game, or something to entertain players from a broad spectrum. Highly recommended.