Curious Expedition is a roguelike with a difference

Have you ever had that experience where you expected to spend maybe ten or twenty minutes with a game, only to realise that several hours of your life have disappeared and you’ve now completed it three times in a row? I have, and I hold Curious Expedition fully accountable for it.

This piece was intended to be a small, first impressions style piece. What do I like about Curious Expedition? What does it do differently to intrigue the player? What could be improved? Unfortunately for me, it’s hard to look at a piece like that when you’ve played it exhaustively, wasting basically an entire lazy day just exploring the game world and unlocking every single feature. Even so, I’ll try to keep this as brief as possible. Curious Expedition is billed as an 8-bit roguelike exploration game, with the main roguelike feature being a rock hard difficulty level (at either normal or hard levels) and the prospect of death for your party members at every turn. The 8-bit part refers to the visuals, which are quite detailed and colourful, but undoubtedly inspired by games from the 1980’s.

The gameplay, however, feels quite fresh to me. The player begins by choosing one of several famous characters (including the likes of Charles Darwin, Nikola Tesla, Amelia Earhart and so on) and then sets sail on six increasingly challenging adventures. Between adventures the player will return to the Explorer’s Guild, where their fame will be ranked against their peers based on the deeds done and the treasures they return with. There are a few other mechanical features that take place outside the main adventure, such as picking up quests from people at the docks or recruiting new crew members. It’s also possible to sell the artefacts you return home with for cash instead of fame, and ensuring the right balance between increasing fame and preparing for the next trip is essential.

The player has some choice in where their next adventure will be, and sometimes rival explorers will visit the same places adding an extra “race” element to the mission. This is simply because the player who returns home with the spoils fastest will gain a fame bonus, and doing so in the same environment is particularly exciting for those sitting at home to read about, it seems. The actual levels range from “fairly dangerous” on the easiest difficulty level to “brutally punishing” on the hardest. Each environment has its own challenges such as volcanoes, geysers, ice flows, wild animals, angry natives and much, much more, but the main challenge will be in maintaining the sanity of your own party.

With a base value of 100, the party will use sanity each time it moves, with environmental penalties for moving through more arduous terrain such as jungle, ice, or desert. Other effects can also influence sanity, such as being wounded, running out of water, having a certain personality trait or perhaps because of infighting within the group. 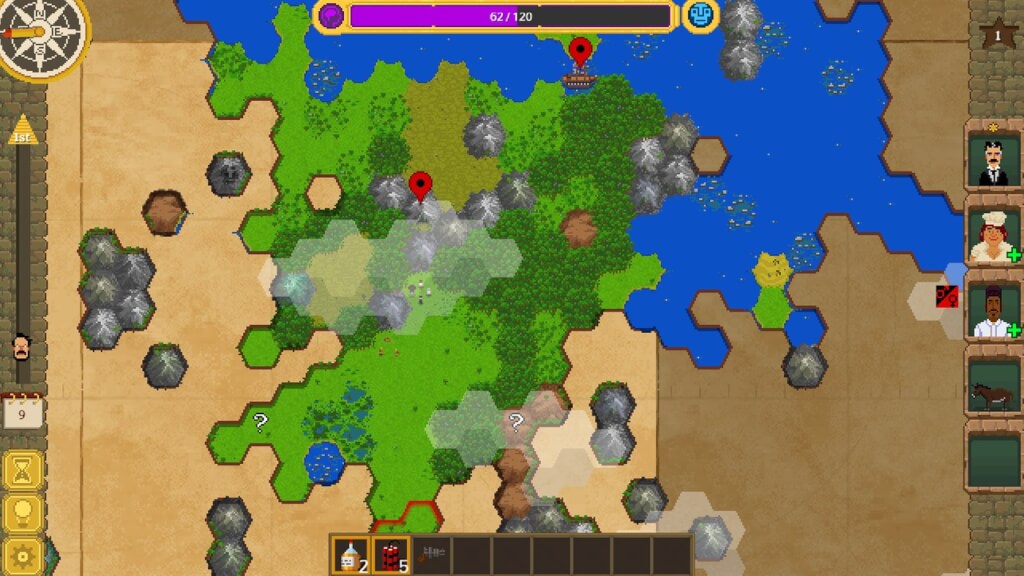 There are only three ways in which each expedition can end. Death (which happens often on those harder difficulty levels), humbling retreat (by either returning to your boat or using a balloon) or in victory. Winning in Curious Expedition is achieved when the player locates the Golden Pyramid, or in the case of certain later levels, the Buried Pyramid, which must then be accessed by visiting one to three Golden Seals.

In my experience, there’s a sharp difficulty curve to navigate when going from a “normal” map to a Buried Pyramid map for the first time, since the need to unlock multiple Golden Seals can triple the travel time needed, or in a three seal map, travel can be increased by maybe ten times the norm. Thankfully, you’ll always know a Buried Pyramid map before you enter, and you’ll know that you face one, two or three seals depending on whether you are on expedition four, five or six respectively. Performing certain in-game actions will have a profound influence on your fame, your standing with the local natives and the loyalty and status of your party. You can enter these maps with an intent to take everything you can from the locals, and whilst this is worth a lot of fame, it may cause locals to become aggressive towards you, and your own team to become disloyal.

Combat can often be avoided by circumventing enemy sight radius (which is shown on the map) but when it is joined (either voluntarily or not) it’s a simple affair. Each team deals damage based on a roll of the dice, and the player can influence their own dice with shotguns, spears, extra ammo and other bonuses. In general, combat is tough and shouldn’t be entered into lightly unless victory is certain and you have healing items. There are also unlockables and upgrades within the game, and completing your six expeditions in certain ways will often unlock new explorers, for a total of about twenty to choose from, each with their own starting party and bonus. It’s also possible — nay, essential — to level up your party as the game goes on, allowing them to become stronger, more loyal, to carry more things or to gain new traits themselves.

If you put all this together; the great looks and the fun little tunes, the fantastic depth of character development and the way in which the levels become increasingly hard, but always come together as a cohesive world, Curious Expedition is a fabulous little game. I had only intended to spend a few hours with it, but my time quickly disappeared and I found myself keen to try new explorers and restart several times. As such, I wholeheartedly recommend this one.

You can find Curious Expedition on Nintendo Switch, PS4, Xbox One and Steam.