Court of the Dead: Mourners Call is quite a mouthful — and at first glance, the box appears to be as large as the title. This is one of those huge box thematic games that results from a large Kickstarter, and even though the review copy we’ve been provided with is just the base game, it is nonetheless huge, and contains no less than forty-something detailed miniatures — including three very large ones.

Despite the presence of such a huge number of miniatures, Court of the Dead: Mourners Call isn’t really a miniatures game. Instead, it mixes elements of drafting, area control, hand management and action selection to drive a euro/ameritrash style experience.

Continuing the theme that “more is better” each round is split into an eye watering eight phases, but despite the huge box, the masses of stuff within it and the seemingly huge number of phases and mechanics, Court of the Dead: Mourners Call is actually fairly straightforward. What really helps it succeed in bringing everything together is the incredible setting, and the fact that every card and piece is marinated in a rich, tasty lore. 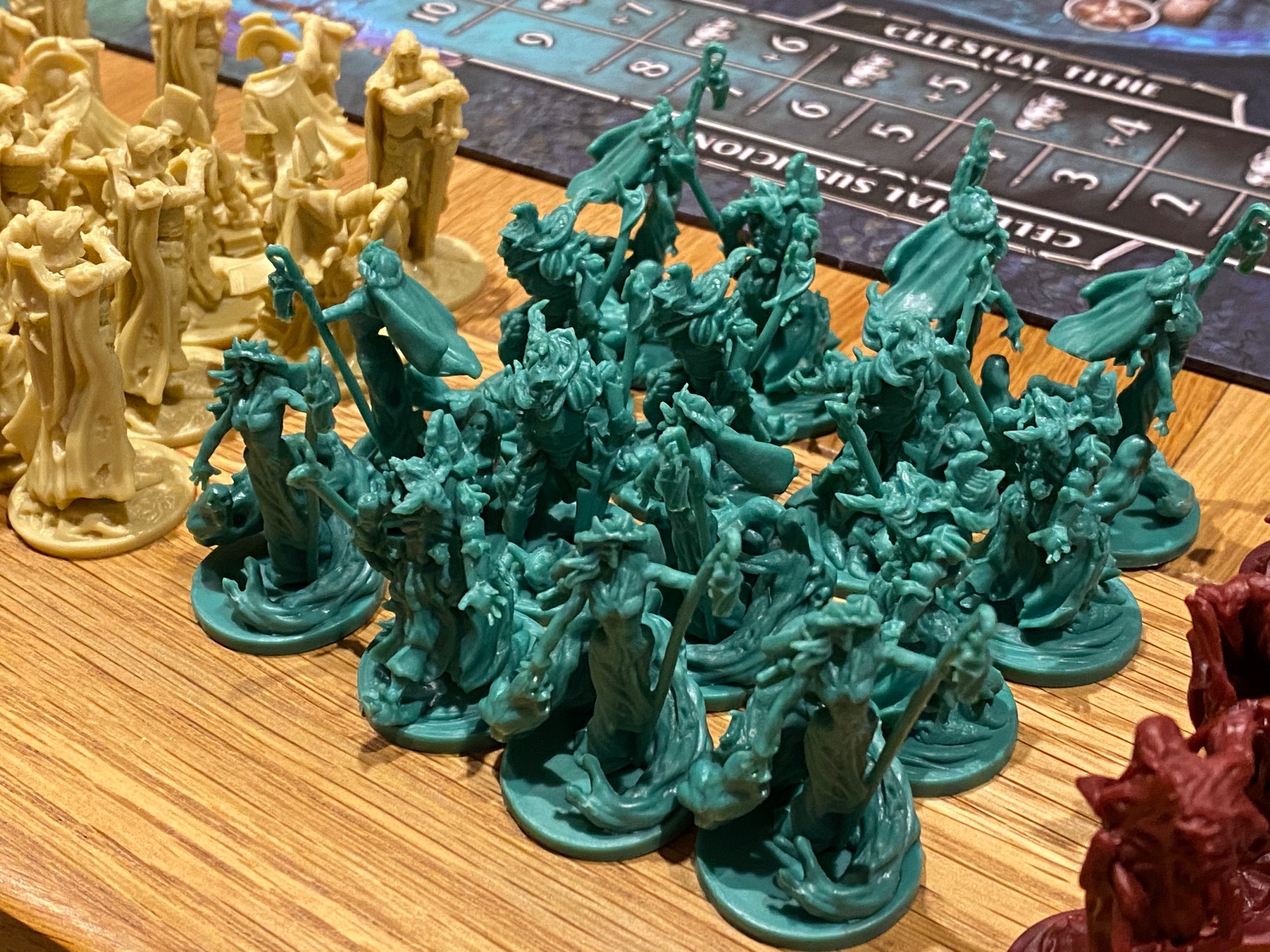 The winner of the game will be the player who ultimately scores the most points across unity tokens, faction influence and cards held, but to understand what that really means, I’m going to need to explain the setting. Court of the Dead: Mourners Call takes place in some kind of fantasy underworld, with each player taking the role of a Mourner — a guardian of the realm, tasked with maintaining balance.

In gameplay terms, this means managing your influence over the three factions (Flesh, Bone and Spirit) who constantly battle for control, whilst also maintaining two tracks — Celestial and Dreadsgrip. These tracks indicate how much attention is being paid to the world that the Mourners in habit by the more powerful immortal forces that occupy the extended setting.

The players must collectively pay a tithe to these forces each round, with the currency that drives much of the game being used both for this tithe and a lot of the other activities known as Etherea. The game increases or decreases the tithe based on the current level of suspicion, and players who cause either track to breach lose unity — which acts as both a key scoring mechanism and a countdown to the end of the game. 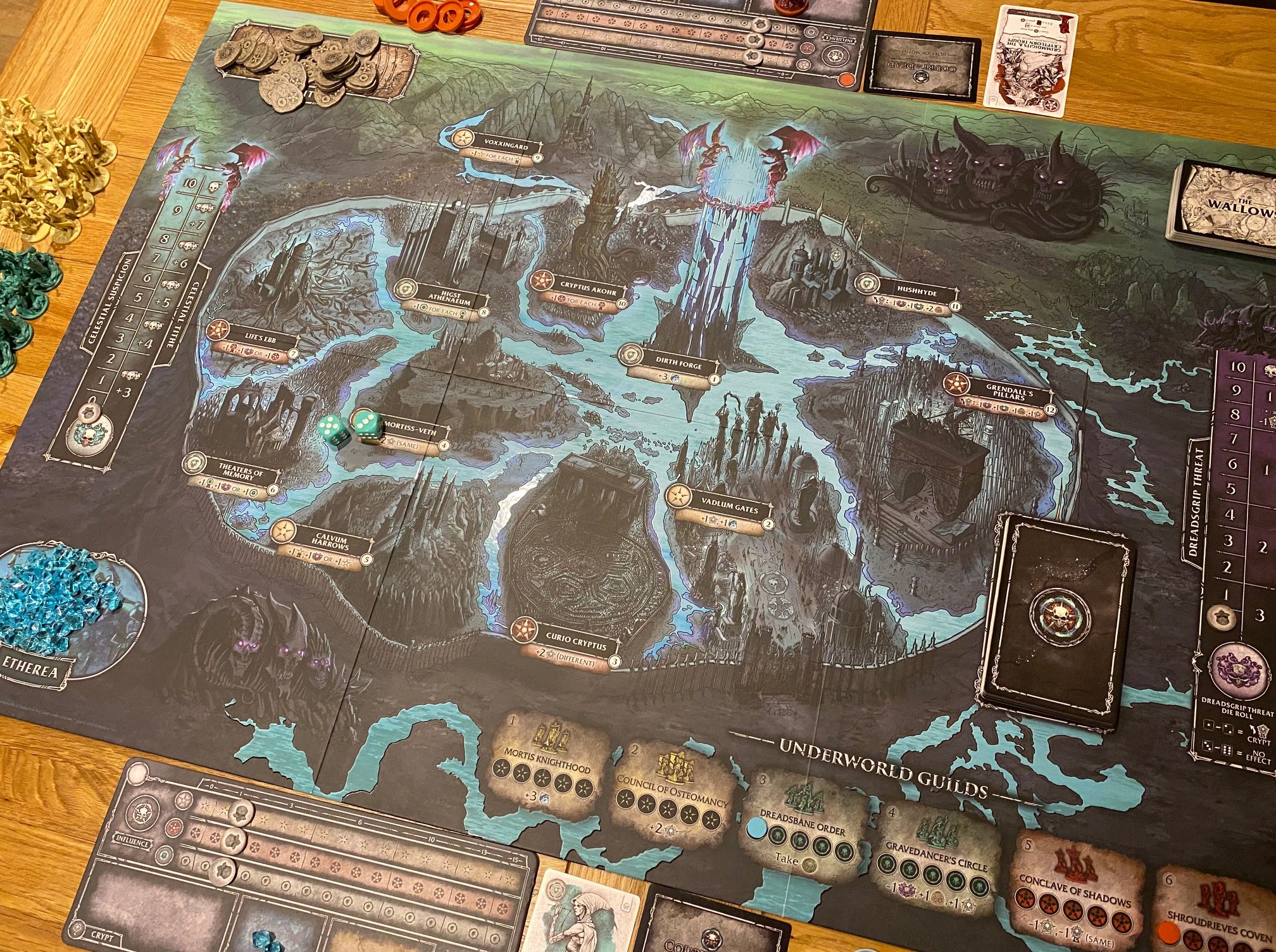 I am quite reluctant to actually walk through all eight phases since this is a review and not an instructional article, but I do think it’s important to back up my statement that Court of the Dead: Mourners Call is simpler than you might expect. The eight phases of each round, at a high level, are as follows — players will continue to play rounds until the last unity token is taken:

1 – Etherea Distribution: During this phase, the current first player (whoever is holding the Death miniature) will draw and divide up Etherea into a number of piles based on the player count plus one. Each pile may be unequal and can even contain zero Etherea. The other players then choose a pile to keep in turn order, with the final pile (even if empty) being added to the Celestial Tithe for later

2 – Draw Walllows Cards: This is a fairly simple one, and each player is simply dealt one card from the Wallows deck. The Wallows is some kind of horrible otherworld that exists around the players underworld, and these cards include a mission for each player to complete during that round, if they can. Sometimes, a Raker will appear and will need to be placed on a set location, but that’s as complicated as this bit gets. 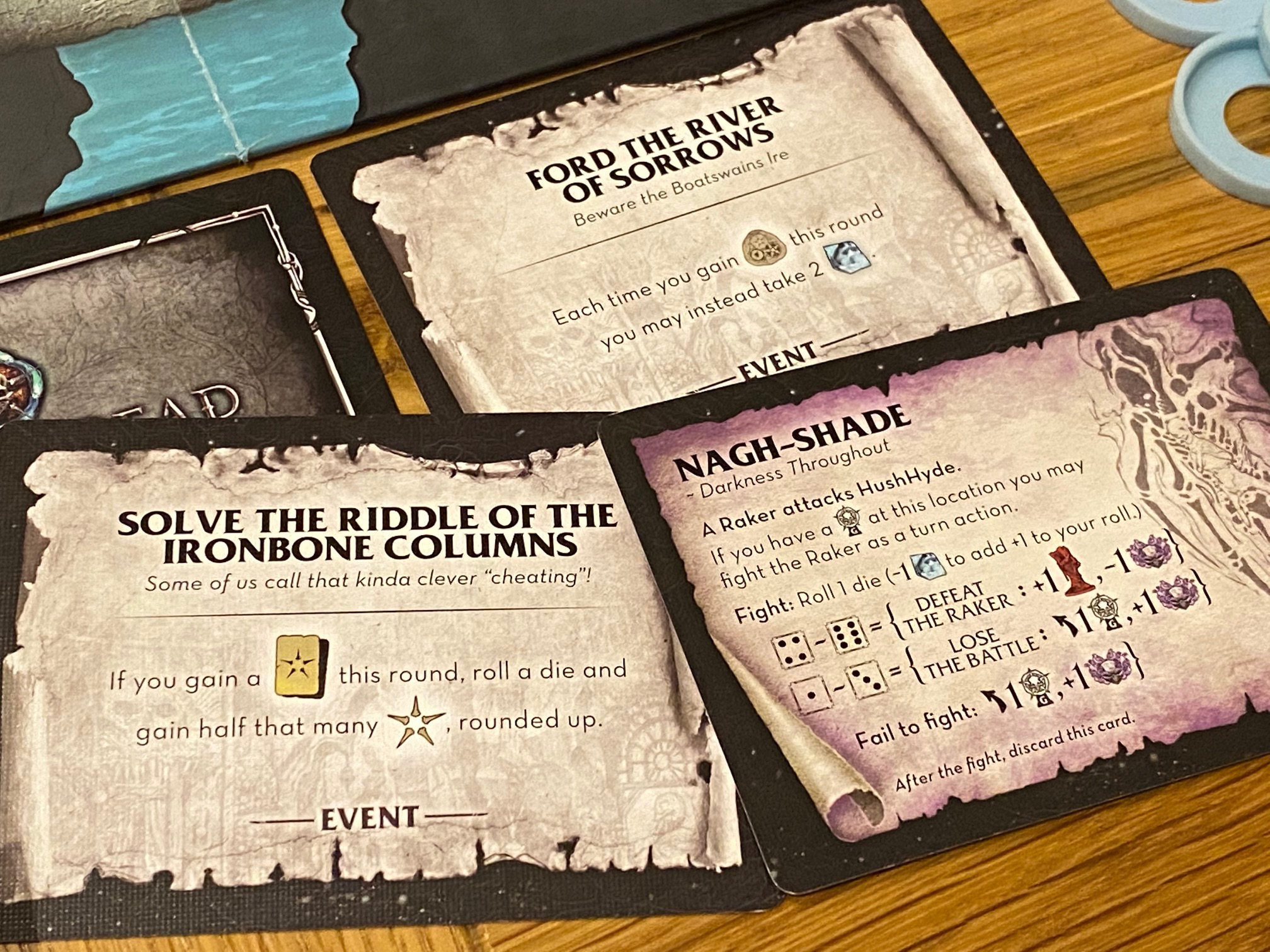 3 – Draft Court of the Dead Cards: Now, the lead player picks up the deck of tarot sized Court cards and deals them out in a set way based on the number of players. The players keep their cards secret and choose one, placing it face down in front of them. The remaining cards are then passed to their neighbour (alternating directions each round) and another is taken. This process is repeated until either all cards are claimed, or at some counts, the final card handed over is discarded.

4 – Action Phase: The action phase is where the real meat of the game happens, with players able to recruit guild figures, recruit mourners, activate a mourner card, move figures on the board, or use Court cards. Each of these actions has a number of nuances, but in summary, guild figures allow the players to exert their presence on the board, whilst mourners (which also come with a matching guild figure) offer powerful effects printed on their card. 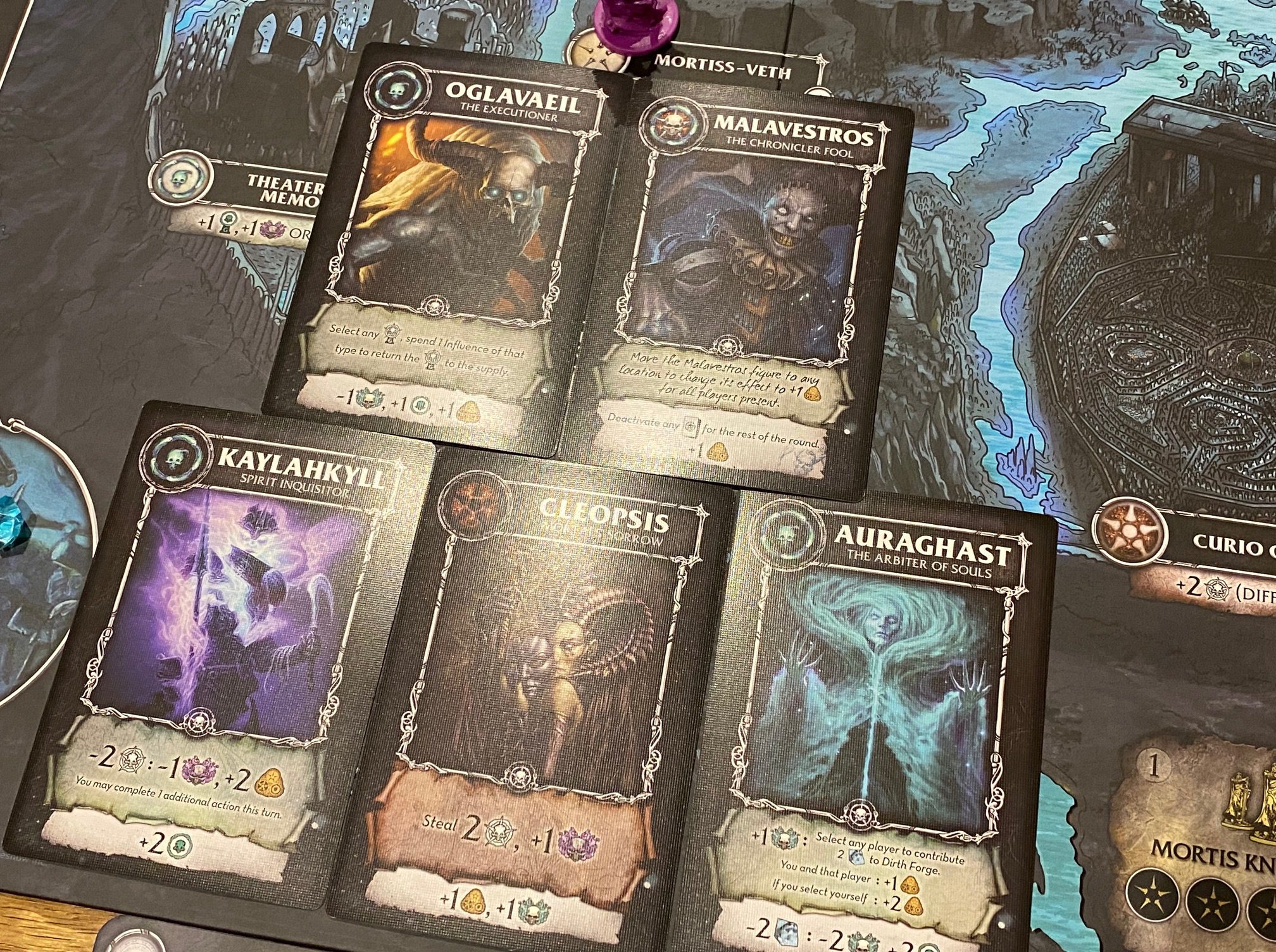 Recruiting and moving will generally cost the player guild influence, whilst playing Court cards will result in either powerful one-off effects, or more often, the accrual of guild resources to then spend on recruitment and movement. Some Court or mourner actions will affect the Celestial or Dreadsgrip tracks as well, whilst others might affect the board in other ways.

In general, this is the round where you’ll manipulate your cards and pieces to try and displace your opponents from spaces where you want control (because in phase 7 you’ll want to have dominance to get the benefit.) But, the game ensures that no one player can easily drop an entirely monstrous turn, simply because in doing so, they’ll probably be the one to break the uneasy truce that binds the underworld setting. I’ll break out of instructional mode for a second to simply say that this works really nicely as a balancing mechanism.

5 – Deathsgrip Threat Check: This one is quite simple really, and involves the players rolling dice in any location where there are more total miniatures than the current suspicion level on the Deathsgrip Threat track. Low rolls will result in miniatures being removed, so there’s an element of risk here, if you spend actions to move miniatures into a setting where the suspicion level is breached, you have to accept that they may be removed (or possibly killed) later. Similarly, increasing suspicion to “break up” groups of opposing miniatures can be a valid tactic during the Action Phase. 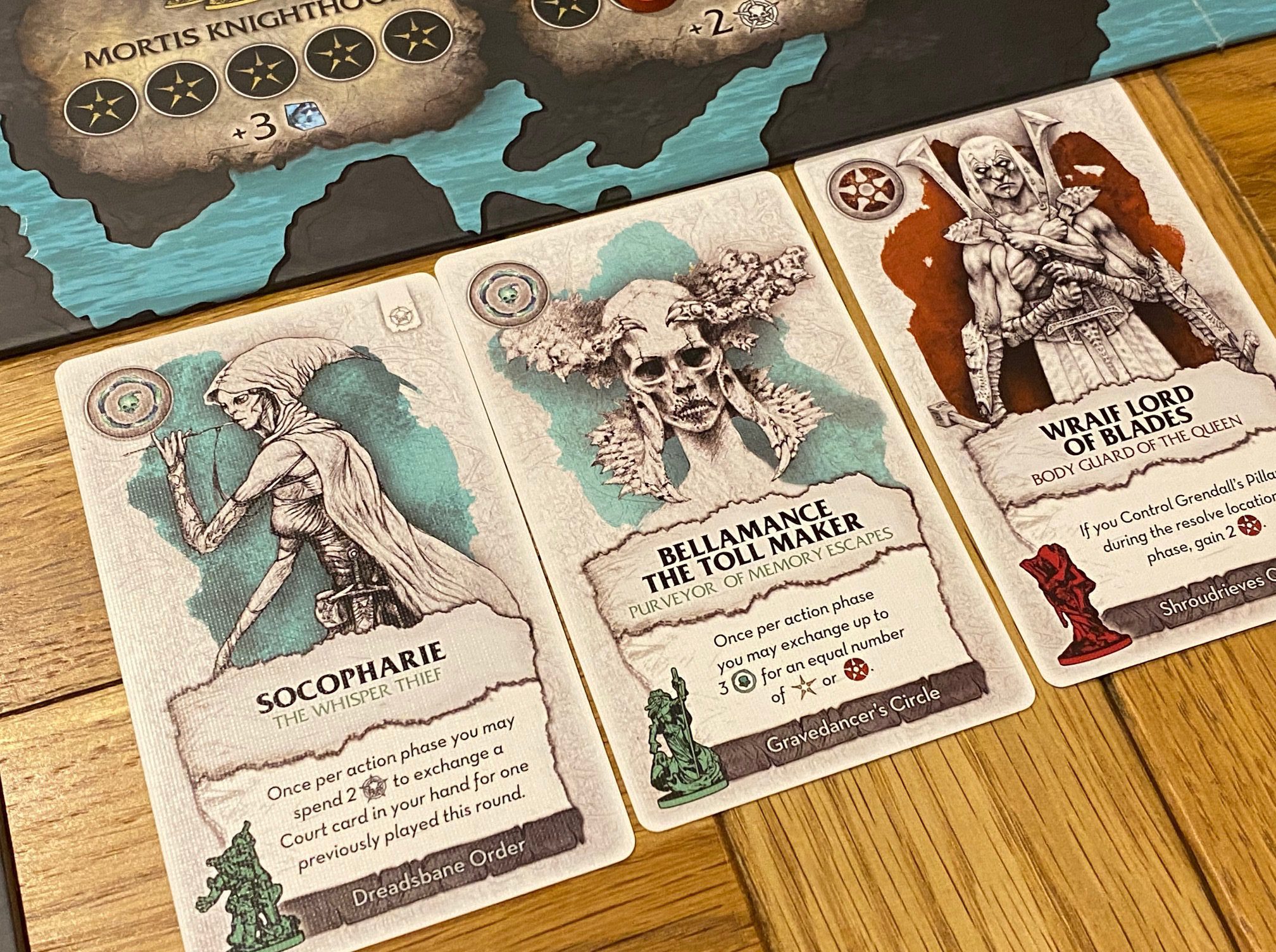 6 – Pay the Celestial Tithe: This one requires some maths that I won’t bother going into here, but the summary is that a tithe must be paid based on a combination of player count and other factors, and all players must choose what to pay in secret — then add it to whatever was already there (remember Phase 1?) If the tithe can be paid in full, there’s no consequence and the player who contributed most will gain unity, whilst if it is not paid, the lowest contributors will be penalised and both the Celestial and Deathsgrip Track’s will increase — which can then hit peak and punish the lowest contributor further. In short, you should pay the tithe!

7 – Resolve Board Locations: This is what everything else leads to really, as each location where the players have presence is resolved. In summary, this is very close to a simple majority rules (with the Death figure allowing one tiebreaker to the player who holds it). Each location offers guild benefits, the ability to claim the Death figure, draw cards and so on — it’s simple stuff really.

8 – Clean Up: Again, this is another simple one where players simply return “borrowed” guild heroes, untap used mourners, resolve incomplete Wallows cards and so on. It’s no big deal really. 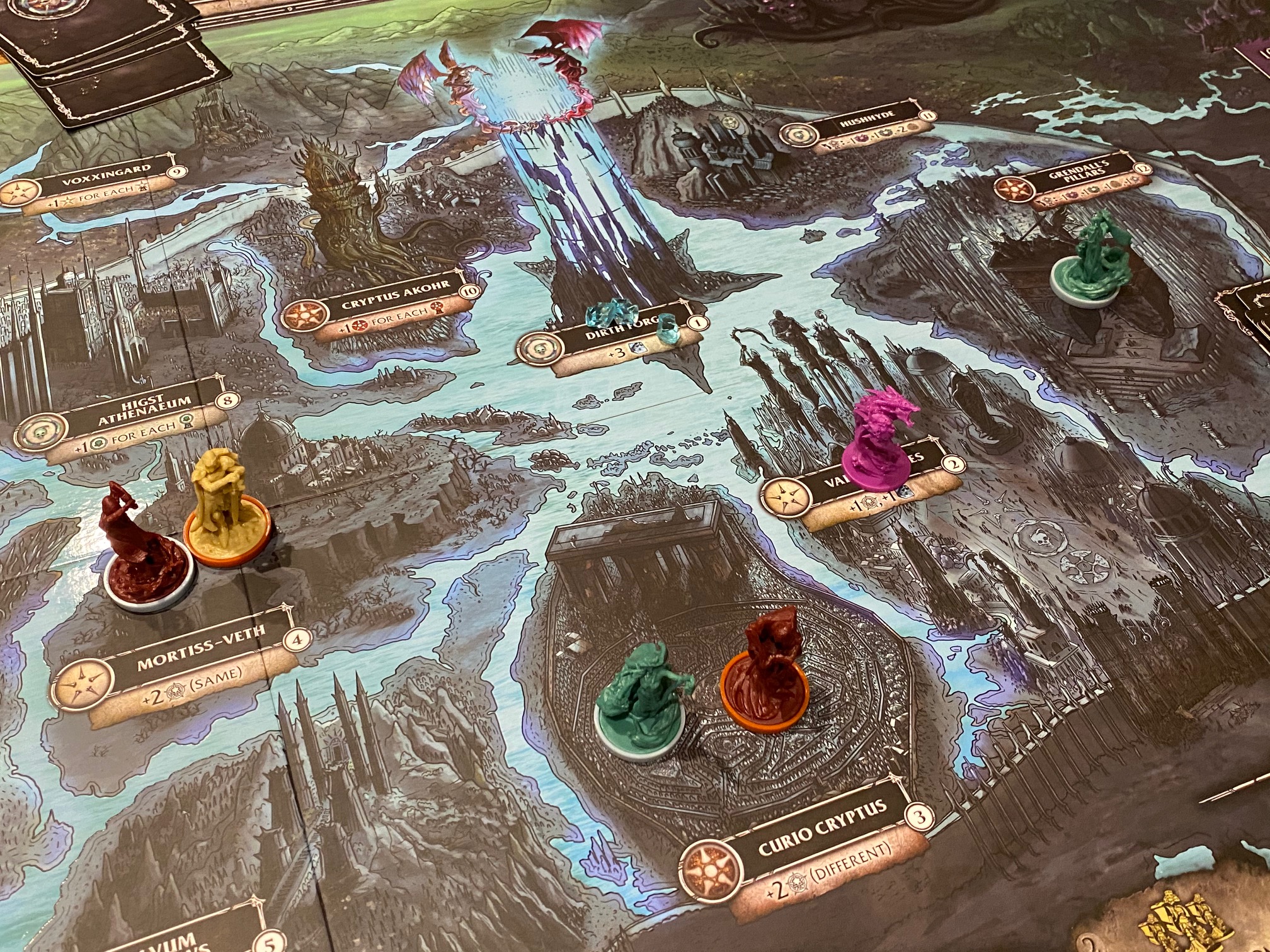 As I mentioned earlier, this round structure goes on until the last unity token is taken, at which point there may be one more round of actions depending on the phase when this happens. The total score is then calculated based on unity plus faction influence plus any points given by mourner, wallows or the secret agenda cards dealt during setup.

A game of Court of the Dead: Mourners Call tends to take about one and a half to two hours, and as I mentioned before, it’s really quite simple once it clicks into place. The whole teaching experience really comes together well because it flows so nicely with the theme — if you can get your head around the idea that no one is “in” the three factions as such, but merely using them, it really does help. 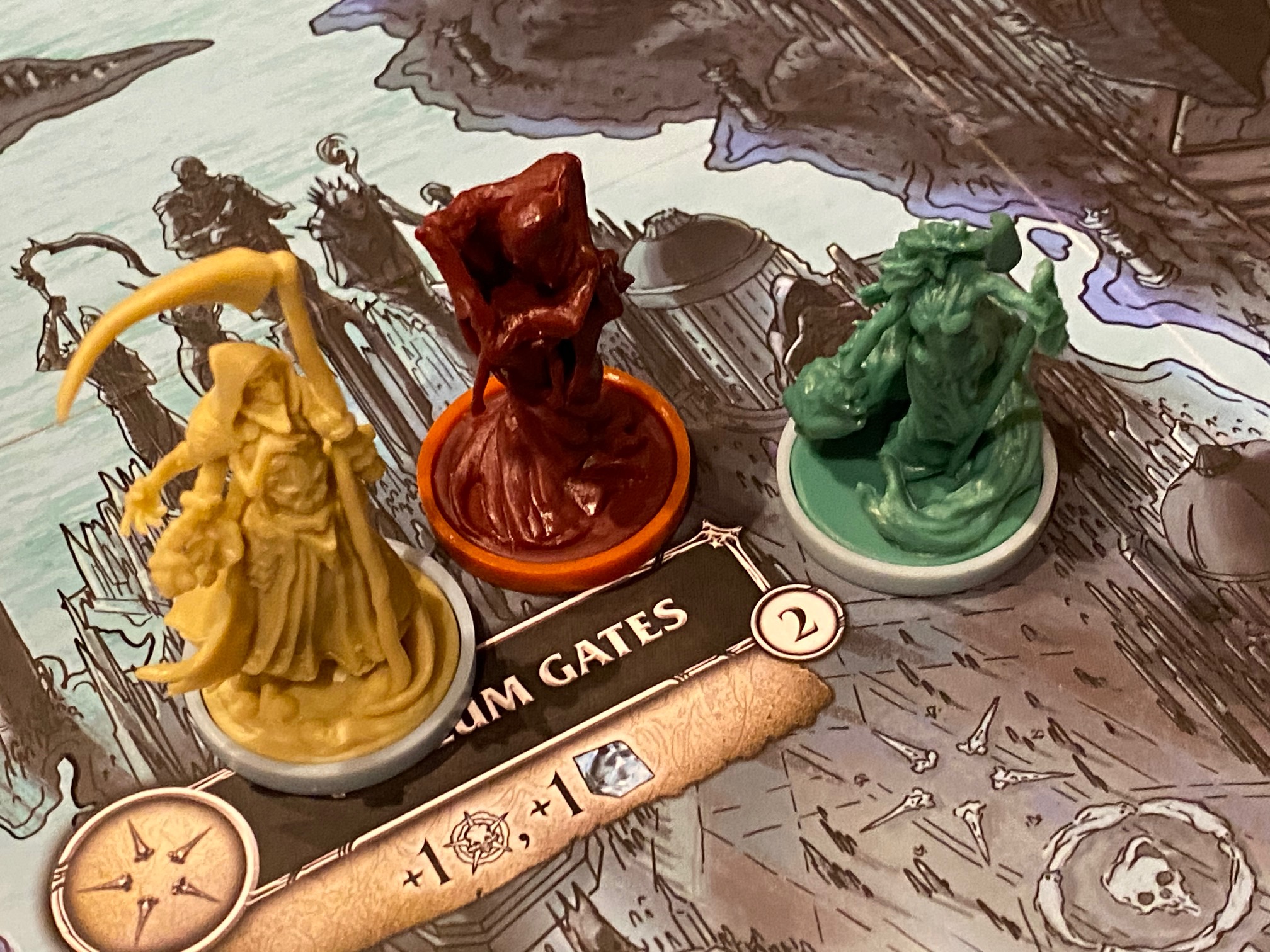 You can then step back from the idea of the factions and look at the bigger picture — which is critical when you realise how important the two tracks and the tithe are to the gameplay. You do NOT want to be the player who triggers either of those tracks to hit the top, such is the weight of the penalty. With that said, if you can have a really huge turn in doing so, it can mitigate it – this makes for a lot of interesting calculations.

In wrapping up, Court of the Dead: Mourners Call, like Cry Havoc or Lords of Hellas, has reminded me just how much I can enjoy a smart Ameritrash game, even if the initial size and stupid amount of plastic put me off. Court of the Dead: Mourners Call is much smarter than I thought it would be, and the superb lore and incredible artwork really bring it to life. This is definitely a surprise hit, and one you should seriously think about checking out.

You can find Court of the Dead: Mourners Call on Amazon.