Everything is suddenly going wrong at Cosmonious High, the first ever interspecies high school, and with the headmaster cowering in their office it’s up to you, the New Kid, to sort it all out.

There are few developers who can be considered as established in the VR space as Owlchemy Labs. Their latest game, Cosmonious High, joins Job Simulator and Vacation Simulator as utter staples and must-haves for anybody who has a VR, and it — as Vacation Simulator did before — shows that the team are getting stronger and stronger with each release. Where Job Simulator had you moving from role to role, but operating in standing ‘booths’ and small, static areas, Cosmonious High has a whole map of interconnected rooms and corridors to explore and play around in, and even those corridors are full of things to do.

The setup is quite simple, you’re a Prismi; a species who can develop elemental powers when put under stress. You’re on your way to your first day at Cosmonious High where you can attend lessons like Astralgebra and Visualetics as well as socialise with your classmates. Things start going wrong very quickly though, almost deliberately. You start off with telekinesis powers — allowing you to point at things and wrist-snap them toward you — but quickly gain the power to shoot out blasts of water because your school bus crashes directly into the school. Vents, lights and windows break around the school and meteors rain down on the grand hall, that’s only the start of it though. If that wasn’t bad enough, the headmaster/principal runs away and locks themselves in their office and the AI who normally helps around the school has gone haywire, suddenly gating off classes based on credits.

The credit system works as a standard, progress-gating system, and it also gives a lot of structure that Owlchemy Labs haven’t in their games previously. Each of the classes contains at least one workspace where you can tinker with mechanics ranging from chemical mixing to painting and stamping. A lot of these things feel quite familiar to in previous games from the developers, but vastly more in-depth here. You can move items between the classes, either by carrying them or putting them in your backpack, and you will actually need to do this in order to get some of the extra credits as well as complete the yearbook storyline. It also, combined with the extensive powers —- ranging from crystal tracing through freeze blast and more — adds many more options to how you interact with the game world. Where Job Simulator and Vacation Simulator felt like you were manning booths, Cosmonious High truly feels like you have a free roam of the school. 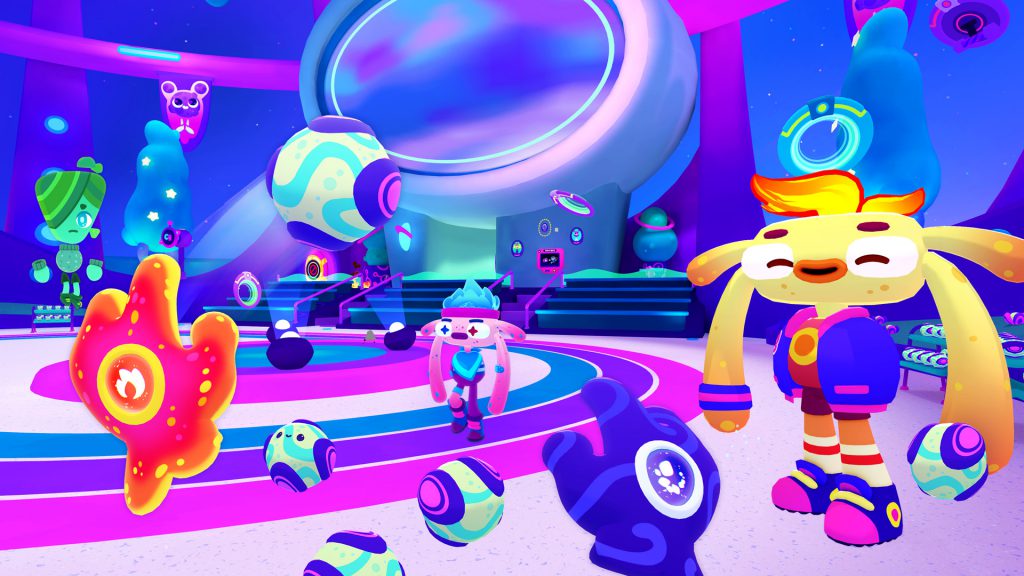 There are a few issues which VR games seem to run into regularly; transportation and inventory are among the most obvious. The backpack option here feels great, you reach over your back and grab it to pull it from your back, and then do the repeat to put it back on your back. As for movement, it’s an ‘analogue-stick to indicate teleport destination’ kinda deal, but it feels well done and the jumps aren’t jarring at all, unlike in some other games. My favourite thing though is how you select new abilities. This is done by touching a panel on the back of either of your hands and then selecting from a pop-up, holographic menu. Each hand is independent, so you can have different abilities on each, and sometimes they combine for interesting effects. There are very few things in VR that have felt as satisfying as blasting out with one hand while using the other to reprogram it, it feels incredibly futuristic, and like something out of an over-the-top sci-fi action movie… although maybe that’s just me.

It’s handy that the ability to change between powers is easy because you’ll do it a lot. Each room you enter has at least a handful of different things that are simply broken, pipes that need freezing shut, blobs that need clearing away and water dispensers that have run empty. There’s no shortage of things to do, and alongside that (and the extra credits) there’re also lots of collectables littered around the game world and you can work in the school cafe if you wish. 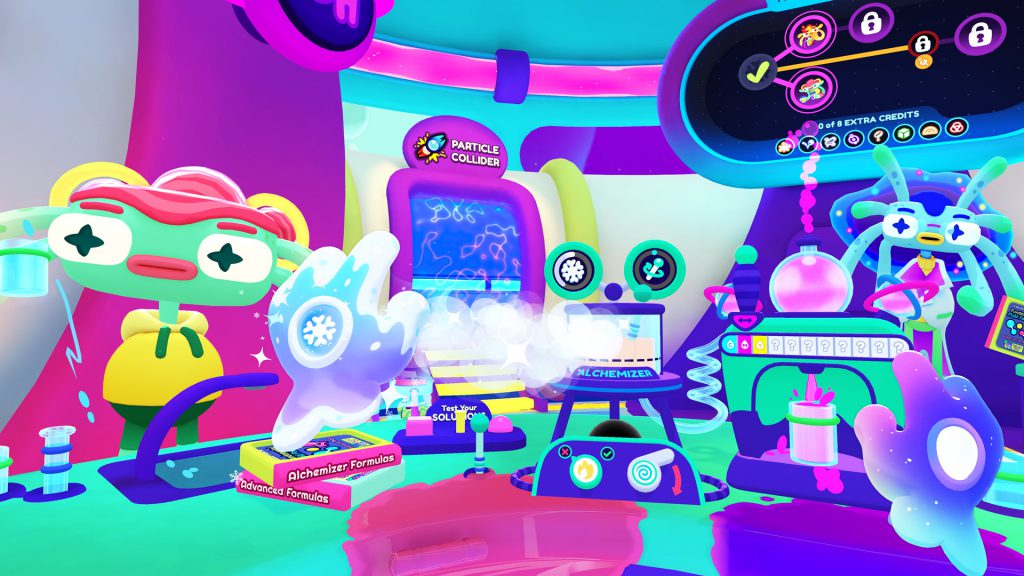 Despite the fact that there’s clearly a lot to do in Cosmonious High, the most memorable part of the entire experience is the other characters that occupy its halls. Both of my daughters, Amelia and Robin, have been playing through the game for longer than I have. They can tell me about each of the character’s traits, how they feel and what drives them — one character has a crush on somebody, another is really forgetful and loses stuff. The characters are really well designed, in fact there’s a great big blog on the developer’s site explaining the character designs and personalities as well as how they’re programmed to interact with a mass of different items and gestures. It works, it works really well, and it makes for some of the most interactive characters I’ve ever shared space with in games.

Cosmonious High is a VR game that is fun, approachable and just keeps giving. It’s a must-have for VR fans.

Startenders sees you working at a strange, Alien bar