When I think of trick-taking games, I almost never think of cooperation. Teamwork (in games like Whist) yes, but cooperation, no. The need to win — or take — tricks, is inherently focused on winning, and the idea of throwing a trick away based on some forced logic is quite alien. The idea of winning or losing tricks based on shared goals is exactly what The Crew expects of players, however and in doing so, it twists a very classic mechanic just enough to stand out.

The Crew is a very simple game, and the contents of its small box are little more than you’d see from a classic 52 card deck, although there are in fact two decks of cards and a handful of tokens. Aside from these elements, the main component that sets The Crew aside is the Log Book, which acts as both instruction manual and mission control, providing 50 scenarios for the players to work through.

When I say scenarios, what I really mean is the objective of each game. Yes, there’s flavour text and sometimes, the normal rules are varied, but in essence, The Crew always plays out based on the same idea — that each player must claim tricks that contain specific cards. This, of course, would be easy if the players were allowed to communicate openly about their hands, but given the outer space theme, such communication is impossible! 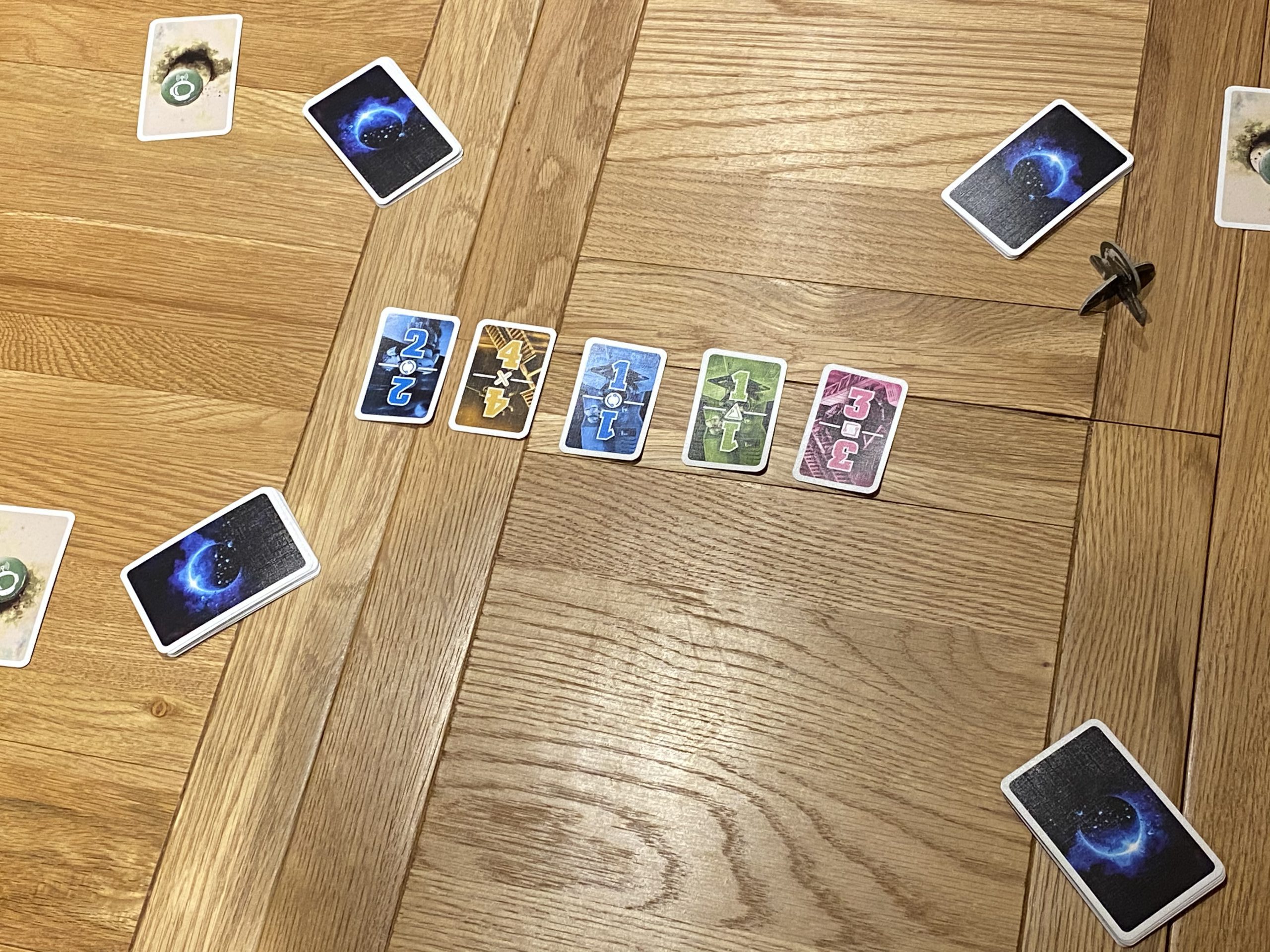 Touching on the ‘outer space’ theme briefly, let me just say that it’s quite light. Each card shows an astronaut or a shuttle, or something broadly space-themed, but aside from the flavour text in the Log Book, the theme is otherwise pretty absent. The way it manifests itself is in limiting communication, you’ll need to think like you were hundreds of thousands of miles away from your colleagues.

Each game begins with the Log Book detailing a number of tasks based on the current scenario. What this means, in short, is that the players will need to deal out a number of cards from the smaller, second deck. Each of these will show a colour and a number, for example the number one, in green. These cards (each of them a task) are then taken by the players, and this may result in one player having more than the other players, or in some players having none.

Another deck of cards (this time of a regular size) will then be dealt between all players. This deck comprises four main suits, each a different colour with cards ranging from one to nine. A fifth deck of cards numbered one to four show rockets, and these act as special trump cards. The only other component the players will receive (usually) is a communications card and a communications token.

The objective for each scenario is for the players who hold each task card (which are left face up on the table) to win any trick that shows that card. For example, if I have the number one green task card, then I must win the trick in which the number one green card is played. Sounds really simple, right? And yes, it would be if you could talk about what cards you have in your hand, but that, fundamentally, is not allowed.

Instead, before each trick is played, the players may place one of the cards in their hand on the table with the comms token in the middle, or at the top or bottom. This indicates that the card in question is either their only card, or the highest or lowest card in the colour shown. If a player has multiple cards of a colour that don’t fit this criteria, then it cannot be placed on the table and shown to the other players. 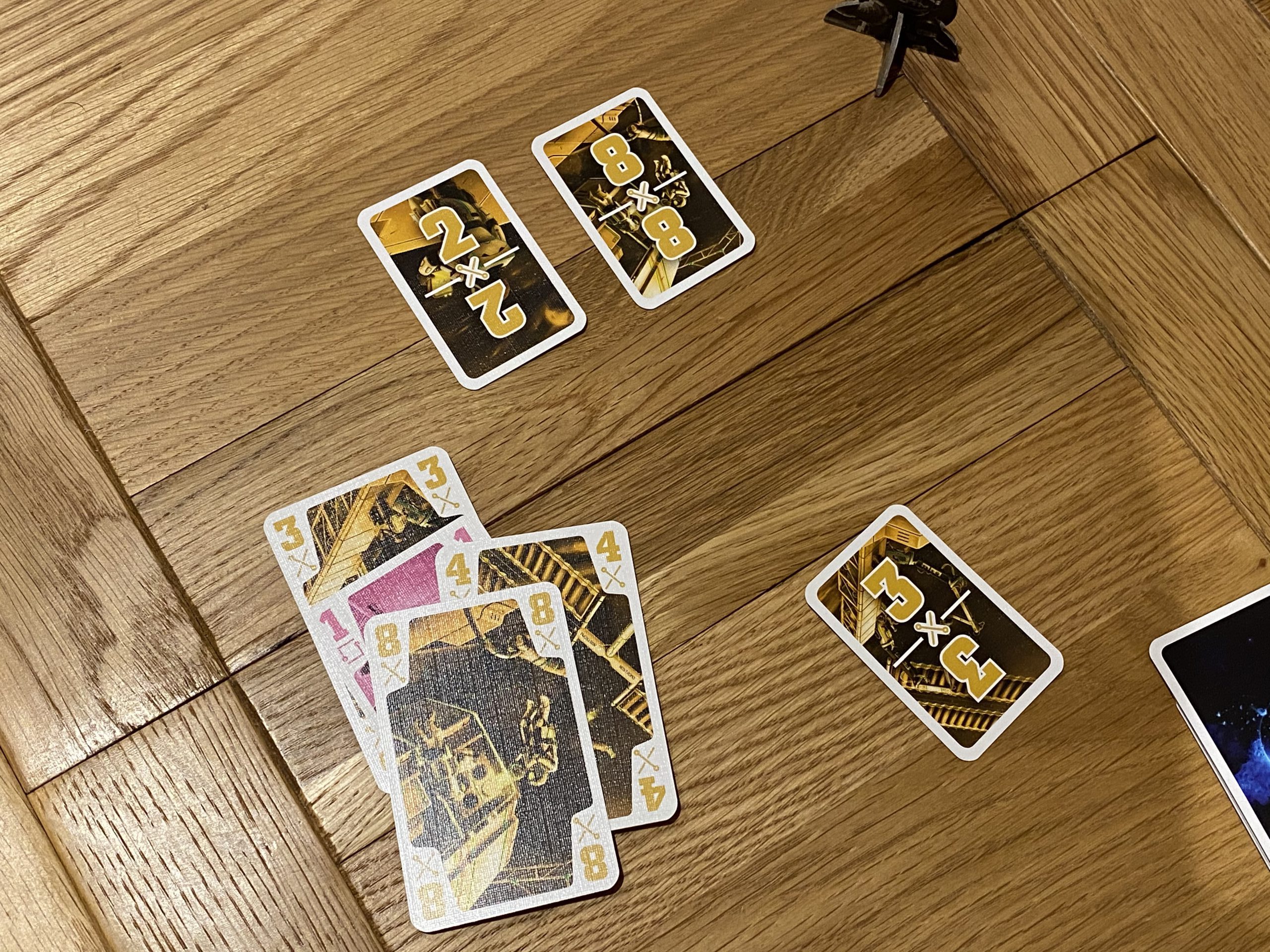 Given that this is the only way in which players can communicate about their cards, in addition to the fact that each player can see the task cards that the other players need, there is just enough information to succeed because The Crew otherwise adheres to normal trick-taking rules. Players must follow suit, trump cards win over any suited number, if you can’t follow suit then you must just throw a card away.

Now let’s just think about how hands might play out… Maybe you need a number nine green and you have it, so you lead off by playing it. The other players see that, and each one chooses to throw away a low green, or perhaps another card if they can’t follow suit. If all goes to plan, the starting player claims the green nine and the team is off to a winning start.

But, let’s look at what else might happen if this hand played out with the lead player not observing some of the information shared by the other players. Let’s say the second player had a green card on the table with their communication token on it, in the middle. What if that card was a card that the second player needed to win a task of their own, and they were using that token to indicate that they must win a green trick? Well, in this case, the players would lose because the first player took a card that was needed to complete someone else’s task — a game loss condition.

A similar situation might occur if another player was forced to trump the first player (which would only happen if they had no cards besides rockets) but it’s the kind of thing that does come up in The Crew. This, basically, is a game that tries to make players read all of the available information whether the current trick looks simple or not. 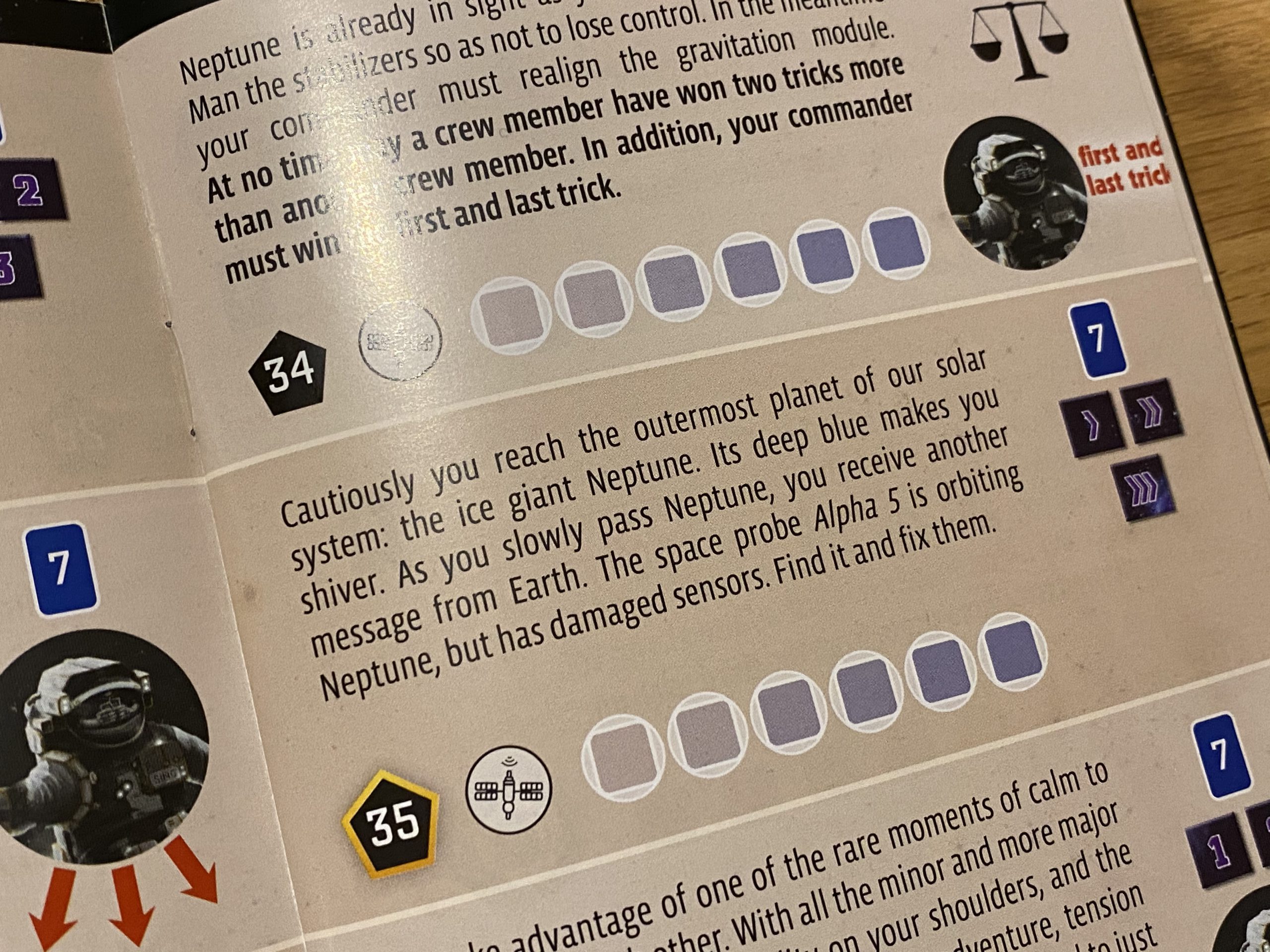 When The Crew really sings is when the first player, who we all know needs a green nine, doesn’t have it, but somehow manages to get it because the other players are smart enough to support them. This can be achieved by one of the players showing the green nine (which will always be the highest green card) and effectively warning the first player of that fact. This, in turn, will often allow the players to contrive a scenario where the players run down their hands so that the first player can trump the trick and take the green nine.

On some occasions, of course, it can go the other way, and tricks can be effectively impossible to win. In the same scenario, if one player has the green nine and the player who needs it has no trump card, then there’s no chance that player can take it. In this case, another player is always going to take the green nine and end the mission. Thankfully, a new mission is very quick to set up and there’s no real consequence (except logging your number of tries) as a result.

All said, this makes The Crew a superb, relatively lightweight and very novel card game. Anyone who has played a standard trick taking game will feel at home right away, with the only element they need to learn being the communication system, and perhaps to a lesser extent to unlearn the competitive nature of normal trick taking games. For the cost, The Crew is basically a must have in my opinion, such is the unique nature of its gameplay and the fun it provides.

You can pick up The Crew on Amazon.