There are a few types of games that work really well in VR, but until this year it didn’t feel like anybody had given bringing a larger-scale city-builder to VR a go. Cities: VR is a virtual reality take on Cities: Skylines, and is a really great starting point for VR city builders.

Let’s start this off by saying that Cities: Skylines is phenomenal. It arrived at just the right time, and while it didn’t have some of the features of the SimCity series, it snatched away a lot of attention with its freeform, sandbox design and clean design from other games in the space. Cities: VR doesn’t come at a similar time, but is a smart repackaging of what made the original a success.

If you’ve not played Cities: Skylines then don’t worry, it’s easy to explain. You hover in the sky, paint roads and zones, as well as water and energy services, onto a map to create a hamlet-village-town-city. As your population scales, you can add in services, like education, health, and police; you also gain access to taxation and loans along the way. Transport services come later, as do a few other things. The main complications come in if you expand too fast, or if you don’t keep an eye on the various map-modes and view filters. If you don’t do that then you’ll lose parts of your city as areas burn down, become abandoned, or worse.

Where Cities: VR deviates is that, unlike the original, the map never expands in size, which means that you never get to really create a sprawling metropolis or multiple, interconnected cities. It’s also missing any of the content added in the various DLCs and expansions, however, that’s to be expected. One thing I wasn’t expecting was for the decorative options to be shrunk down though. The biggest loss for me was the traffic junction management options, an incredibly nerdy sounding part, but something that’s essential for traffic management in the core game. Parks, trees and other terrain elements have been reduced in number so that they work with the UI, this does massively limit the options, although that might not be a big concern for those who are looking for aesthetics due to the fact you can get down there in the streets in VR.

The freeform movement is definitely the main selling point of Cities: VR, you can sweep up to the sky, plot out some zones and then swoop through the streets as you unpause, watching the city spring to life. After a while, once the population starts sliding up, it feels great to watch the citizens driving or walking around, and that feeling is unmatched anywhere else in VR so far. I do wish that there were options to snap up to top/birds-eye level, as the maximum height seems a bit lower than it could be; although that’s maybe been avoided to prevent motion sickness; something I didn’t feel even once. 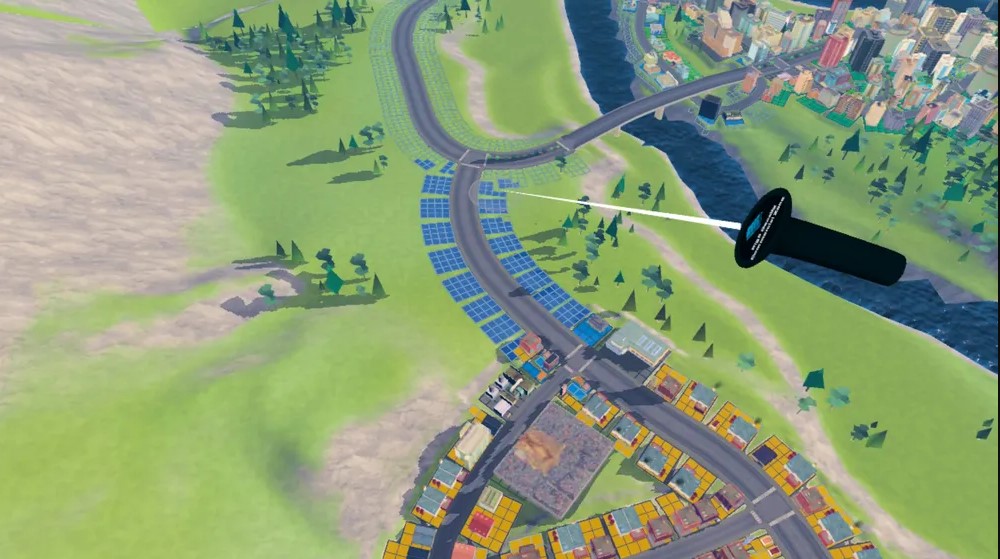 In addition to sliding around the town using the analogue sticks, you can also teleport around. Teleportation is handled well, with the screen essentially fading in and out in a way where the eye naturally loses and regains focus, like a prolonged blink. This is great, and the whole game can be played sitting, which is great because I don’t know if there are many people capable of running around a fully-scaled city in their kitchen.

With movement fully discussed, it’s time to talk about the controls. This is easily the area where the most work has gone in, and it’s the defining point of the VR experience beyond the fact that… its in VR. A lot of buttons and menu options had to be compressed down into a new form of input and it’s okay. It’s not the best, it’s not the worst. Where the PC version had a simple bar with sub-options, the VR version has three floating menu ‘hubs’ around your left hand once you’ve hit the menu button, within each of these there are more menus, and within the construction menus there are then more menus and then, in the case of roads, even more menus. Options like how you paint zoning and angle-snaps are deep in these menus, and while it all makes logical sense, it does feel a lot like fumbling around. That said, pointing and painting with the other hand feels great because of the perspective; you can point at a hill and click, then point at your feet… it feels a lot more ‘god-like’ than the original game. 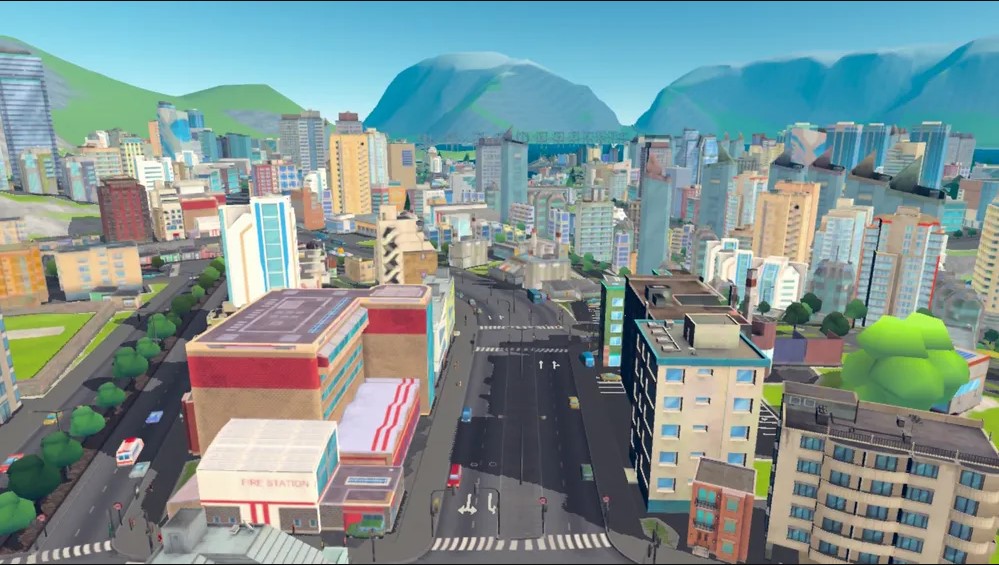 The buttons and menus do feel a bit strange, and I spent a while feeling a little tangled up until I just decided that I’d simply pause and take my time more often. Once I’d stepped away from the race to the top (once you hit new population levels, you unlock more services and features), I found it a lot more enjoyable and started losing myself in the world I was creating. The menus don’t feel like the best solution, and I wonder if there was maybe an air menu or gesture input that might have worked better, but one feature of the UI that really works well here is Cities: VR‘s notifications. Because of the perspective shift, it’s very hard to miss the floating bubbles that inform you of people’s dissatisfaction, so it’s — for me at least — much easier to right any issues quickly.

There’s a lot of content already included, with nine maps in there from launch. I hope that we’ll see more features added in after launch, even if it is in the form of DLC, and think that it can definitely handle it; even if some of the visuals feel a little ropey on the standalone device. Cities: VR certainly wouldn’t be a revolutionary non-VR release, but it’s a fantastic benchmark for VR-based city builders going forward.