Two mech pilots, or maybe their mechs? Lie in a wreckage after a daring attack. They discuss life, living. Death. Oxygen, the self. Across 15 minutes, the end of a life passes by us. Maybe two —- this depends on the choices you make within the conversation. In my playthrough, both pilots grew more scared, and stood in the face of their own death, defiant. They took themselves out in a pact, I believe, and perhaps died. Perhaps, if they were machines then they, lived on. I don’t know —- and it is entirely up to me, or the player, to consider it. A nice, tidy open ending.

The pilots are frayed nerves at the end of frayed nerves. The camel’s back long broken, now sitting in despair. It is engaging. I still think about the two pilots there at the possible end of their lives, or the start of a new beginning. In some ways, I almost hope that they’ve found peace. Maybe they have.

But I didn’t like it. I found the music grating, the dialogue a touch overbearing. Over too soon, yet somehow dragged. I’m realising now, writing this piece, that it is a textbook definition of more than the sum of it’s parts. The 15 minutes stuck with me, more than many things I’ve played for hours, days, and said I loved. And I would happily play it again, and again, in spite of this. 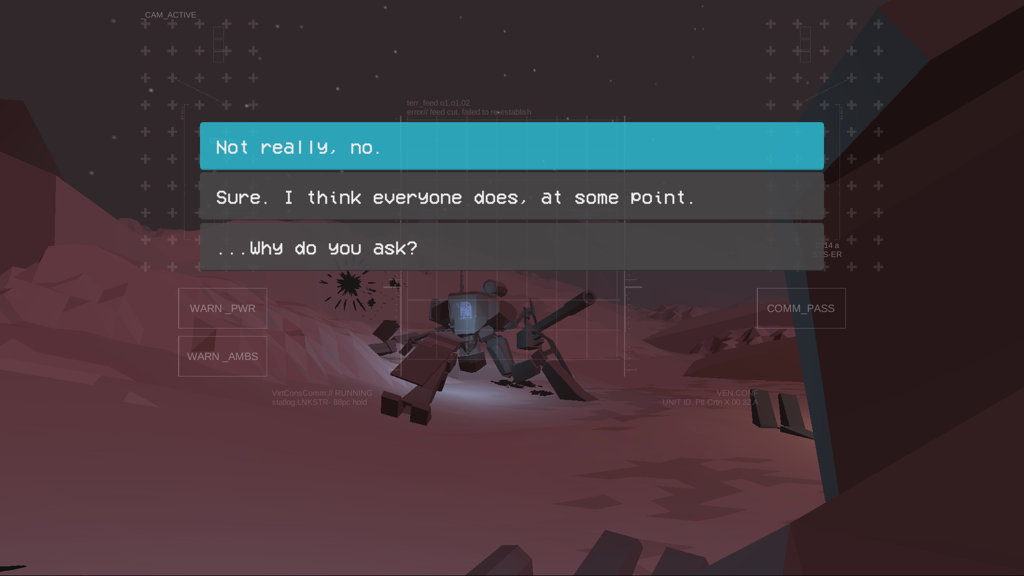 Can Androids Pray? is absolutely worth your time.

Can Androids Pray? Is available on PC, Xbox One, and Nintendo Switch.