Bristol 1350 sees you avoiding the plague and getting out of town!

When it comes to plagues, I feel that everyone now has had enough experience to understand how illness can be quickly spread and that it’s something to be avoided. In Bristol 1350, you are put back into medieval times with a simple goal of getting out of town on an apple cart without contracting the plague. It’s aimed at players thirteen and above, accommodating one to nine players.

In Bristol 1350, each player picks a character card, which gives you a glimpse at who you are, the three actions you can do on your turn, and has a special ability on the back if you are playing advanced mode. Each player also gets two symptom cards. Now, nobody starts the game with the plague, but if you do end up getting above six symptom points at any time, you will have the plague and essentially be a dead person walking. Your game won’t be over, however, your goals will then be to infect as many people as possible instead of attempting to make it out alive. 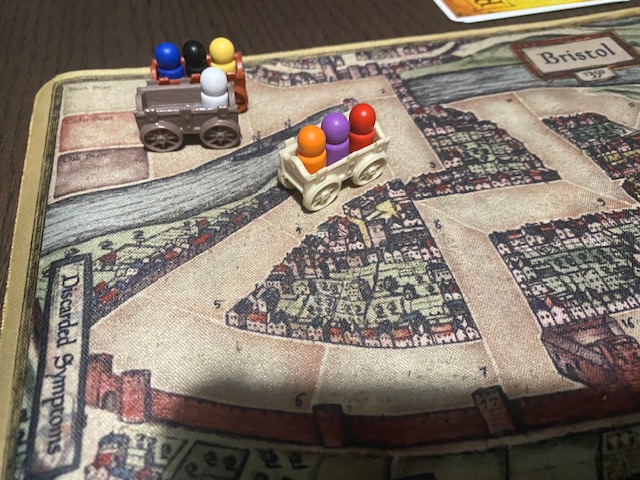 When it comes to the gameplay itself, there are three carts. Each of these cards gets filled with the various players who are a part of the game, randomly. Once you have everyone in their cart, the game begins by someone rolling a bunch of different dice to set up the round. These dice have apples and rats in three colors, each color matching the colors of the carts. Any side with the cart’s color allow the cart to move forward one square on the board, however, apples means you move forward without any sort of repercussion, while having two or more rats on your cart will mean that you and the other members of your cart will have to mingle and exchange symptoms, with a new one being added to your mix — creating a major chance that players will be infected.

On your turn in Bristol 1350, you can re-roll any two dice, move your character forward in your cart, take a move action, or draw a remedy card. Remedy cards can really change your turn and can be used after you’ve drawn it or on your next turn. They do not count as an action, instead giving you a bonus. Often, remedy cards are used to lock in dice that are useful to your cart, so that nobody else can re-roll them, however there are more interesting cards that allow you to use two moves in one go or see the symptom cards ahead of them being used to give you a better idea of if someone has plague, or the chance to set up another cart to contract it on their next mingle. 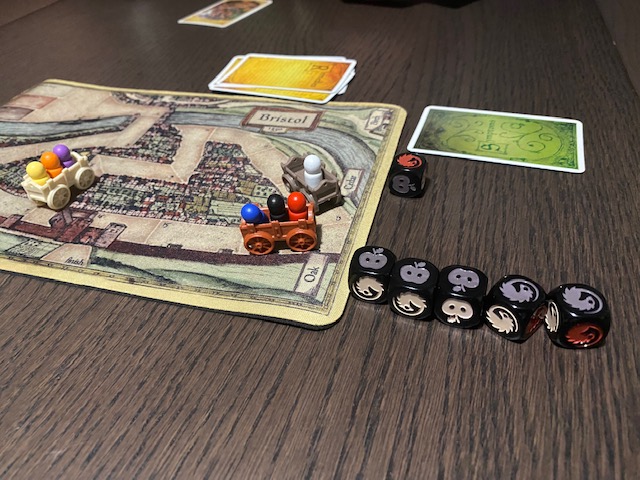 The round continues with each player taking their turn until it gets back to the first. Then the dice are resolved, any mingling happens, the carts move forward, and the dice is rolled again. If you suspect someone in your cart has the plague, giving you a greater chance of getting the plague if you are forced to mingle, then when your next turn comes around it might be smarter to use the movement option then any other: youcan attempt to push them off the cart through a series of turns.

The movement options are when the game gets quite strategic, you can move to the front of your cart, you can push somebody off the cart (in which case they join the backmost vacancy in the carts or die (however you’ll die of shame if they didn’t have the plague) or you can dash to the back of the cart in front. These movements allow you to spread plague, or get off of your cart, and can quickly upset the apple cart. 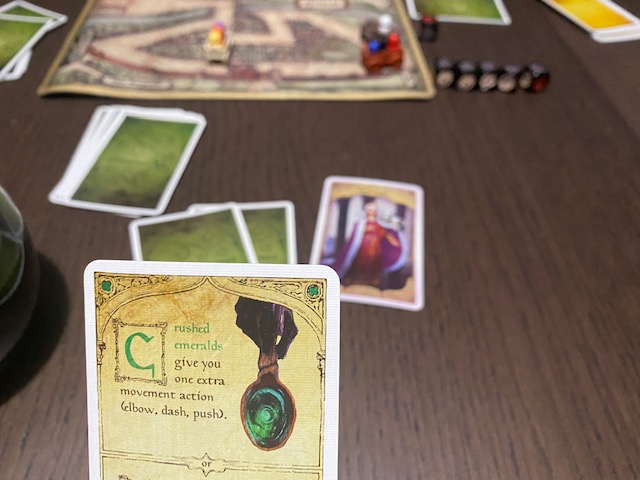 Bristol 1350 was a pretty tame game in our group, until one cart got to the end of the line. At that point there is only one turn until the game ends. With the end nearing, suddenly people were jumping carts, scrambling to get ahead, and once one cart had crossed the line, people started knocking each other off and dying of shame. Once a single cart has crossed the line, there is only that one final round to resolve and it’s then the end of the game. Anyone left in the town is dead, so chaos ensues in the final round. This hectic, all or nothing end of the game is really funny and enjoyable, as everyone stops thinking about the health of those on the cart and instead makes the best decisions for themselves! 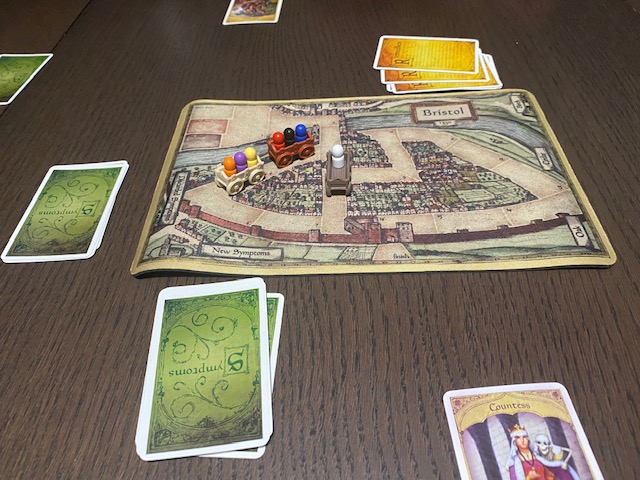 One more thing I want to talk about in Bristol 1350 is the box the game comes in. The board is textured like a mouse mat, with a good print to it, which also has markings for cards and dice placement around it. This is really well designed, and that strong design carries through  in the book-like, magnetic box which everything fits well into. Between the artwork and the general design of the packaging alone you’ll end up with a really beautiful board game that fits snuggly on a shelf and bleeds quality. That and it’s a great game for everything from small to bloated groups of players.