Baron Voodoo casts an interesting spell, but it may leave you a little disorientated!

If times were different and board-games were being played as normal — between a mixture of players who do and don’t know each other, often in dedicated cafes or spaces in public areas — then Baron Voodoo is the kind of game that would make passers-by stop and look. An incredibly eye-catching and straightforward game that uses Draughts mechanics, Baron Voodoo certainly caught my attention.

Baron Voodoo looks like a dice game at first glance. You’ll see a simple board that fits directly into the box without folding, and on this board you’ll see a grid of recessed spaces that each feature one of five colours — expect the central space, which is black and will be left empty during setup. In each of the coloured spaces, the players will place a die of the matching colour, having rolled all the dice beforehand.

The objective of Baron Voodoo is to gather these dice in different combinations and then effectively send them to the spirit world, where they will score points. The bigger the number of matching dice (either colours or faces) then the more points they will be worth. The game ends either when any player reaches a set number of points (determined by player count and clearly shown on each individual player board) or when a player cannot take a move because there are too few dice. 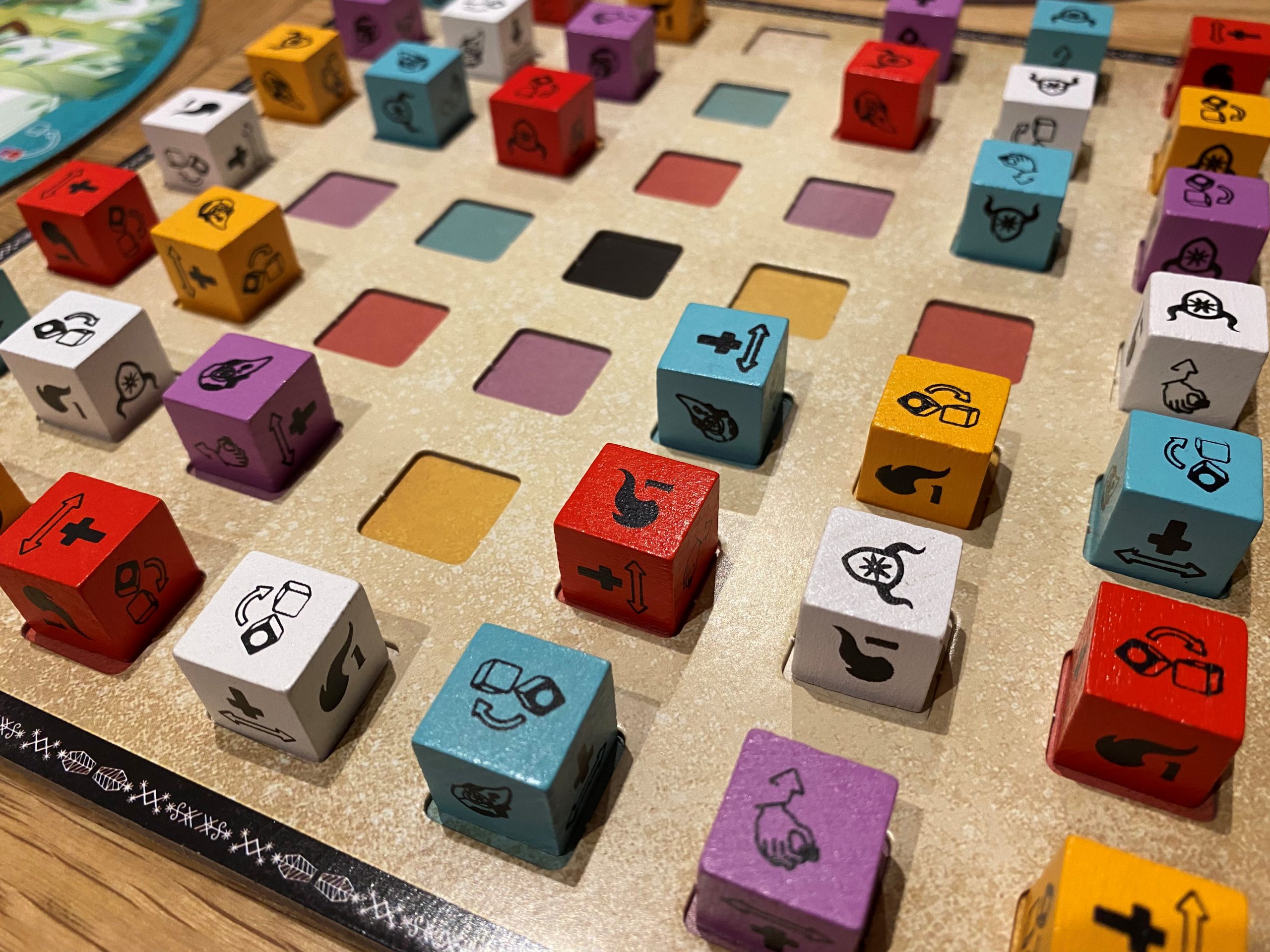 Each player, known thematically as a Loa (a practitioner of Voodoo) has a special power of their own which can be used for free at the beginning or end of their turn. The players are also able to use the power of any other Loa (including those not in the game, should you be playing with fewer than four people) at a cost of one offering. Offerings are gained either at the beginning of the game, or from the dice you’ll draft during the game.

The turn structure in Baron Voodoo is extremely straightforward. The active player may use a Loa power straight away if they wish, or they may do so at the end of their turn. This is because the actual turn itself is performed by choosing one die in the player’s colour (the green Loa chooses green dice, the red chooses red, etc) and then using it to jump over a neighbouring die. It’s worth noting that you don’t need to jump into an empty space, and dice can actually be stacked into columns up to three dice high. 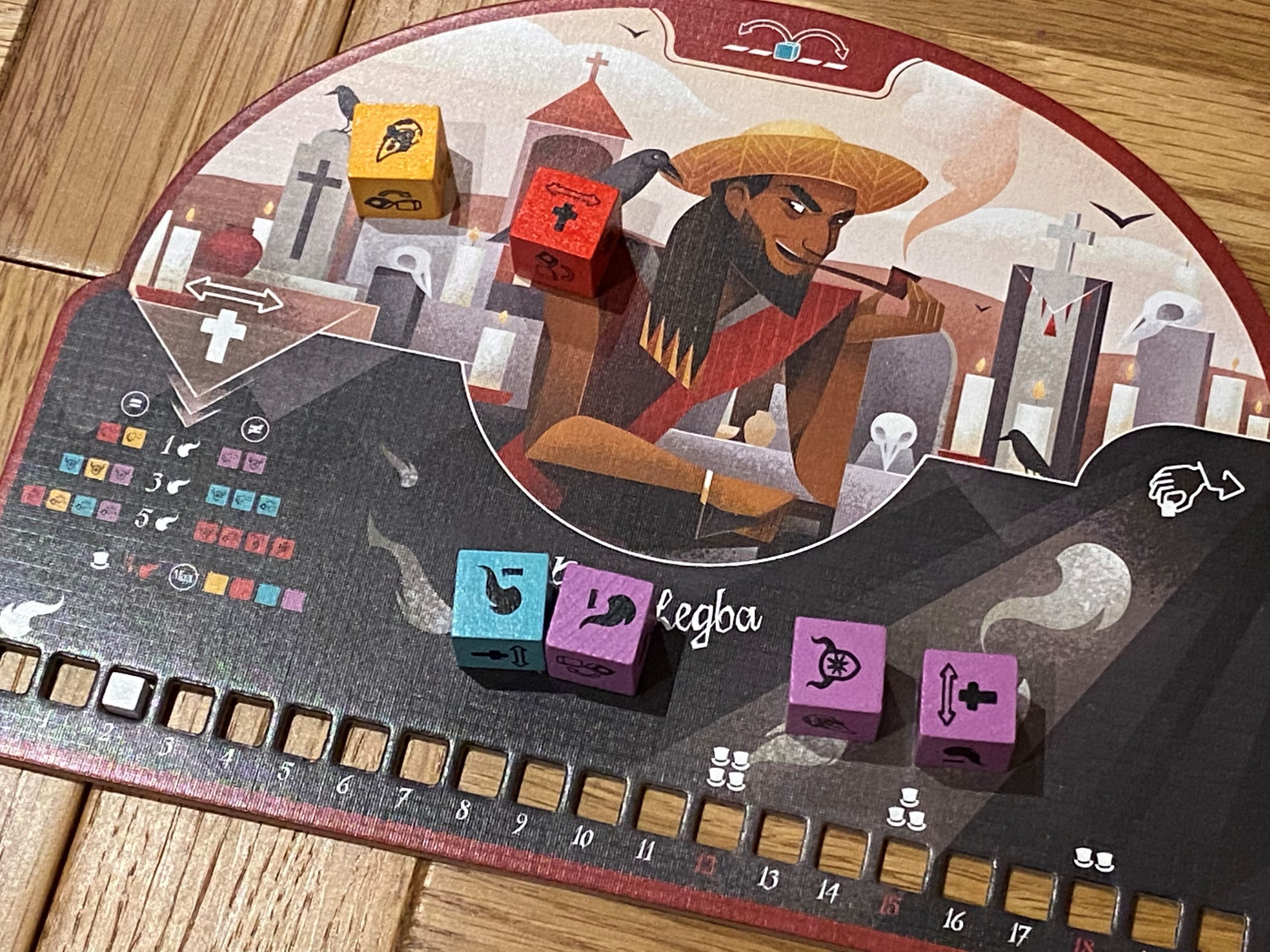 The player then takes the dice that they jumped over and adds it to the top half of their own player board. If they did not use a Loa power before doing this, they may then do so. The trick here being that as the board develops, players will sometimes need to use their Loa power first in order to enable them to take a move.

With the dice capturing done, the player can decide what to do. Some combinations of dice can now be transformed into points by moving them down on the player mat to the Spirit World, whilst sometimes you’ll prefer to take the benefit of the dice after capturing it — for example by generating an offering or similar. 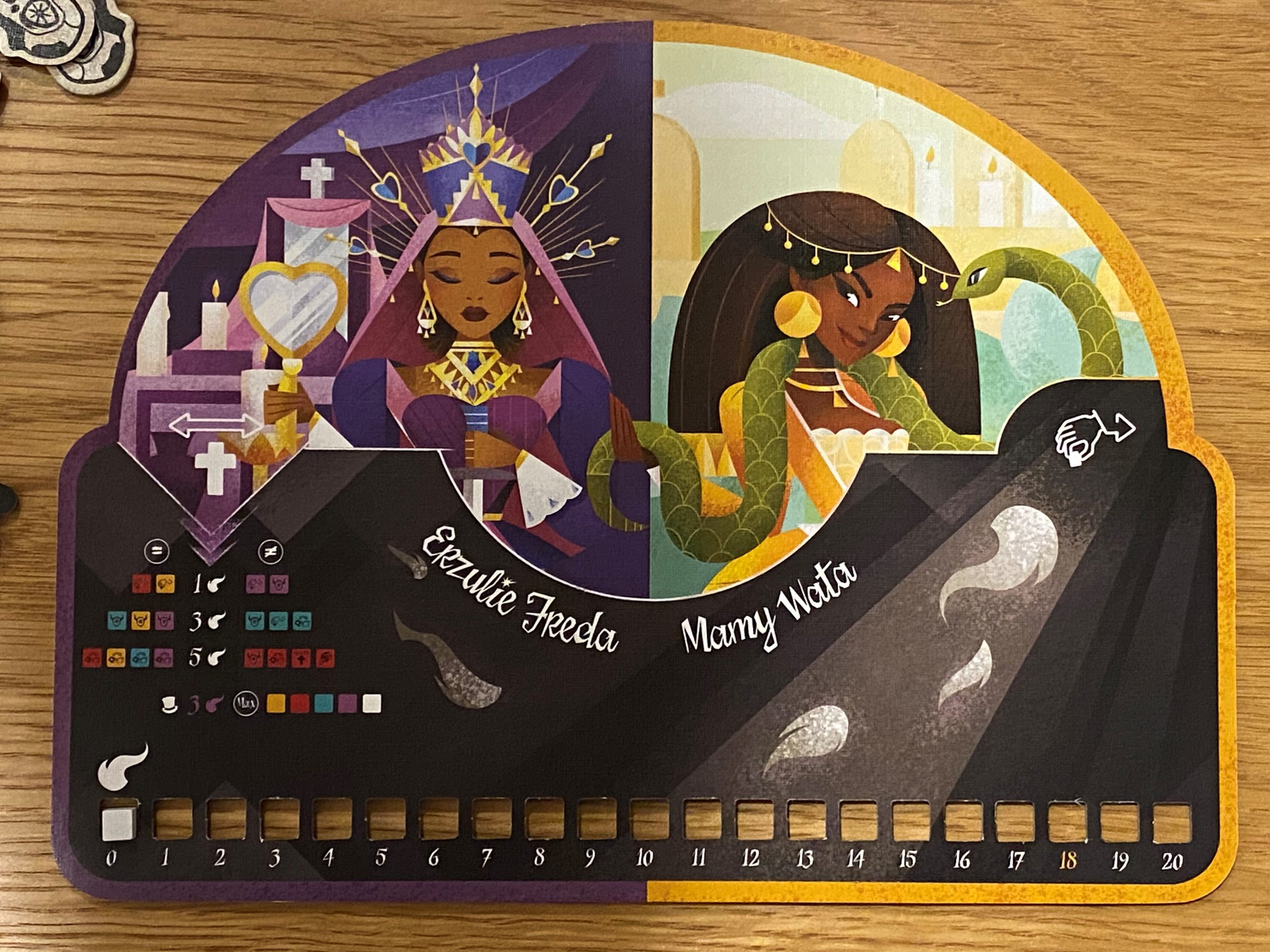 There are a few other things to note that add some interest and variation. First of all, in addition to the four Loa’s that make up the player characters, Baron Voodoo himself actually features in the game. Any player can “gain” the Baron’s Loa power by holding the most white dice (which have no allegiance to a specific player colour) and in doing so, they take his token to show that they have his allegiance (for the time being).

In addition, there are a number of ways in which you can affect other players, which makes Baron Voodoo a very confrontational game. Firstly, you can use your own (or another) Loa power to affect the board significantly. Equally, some of the abilities unlocked by collecting dice (or one of the Loa powers) allows you to pinch or manipulate dice already captured by other players. 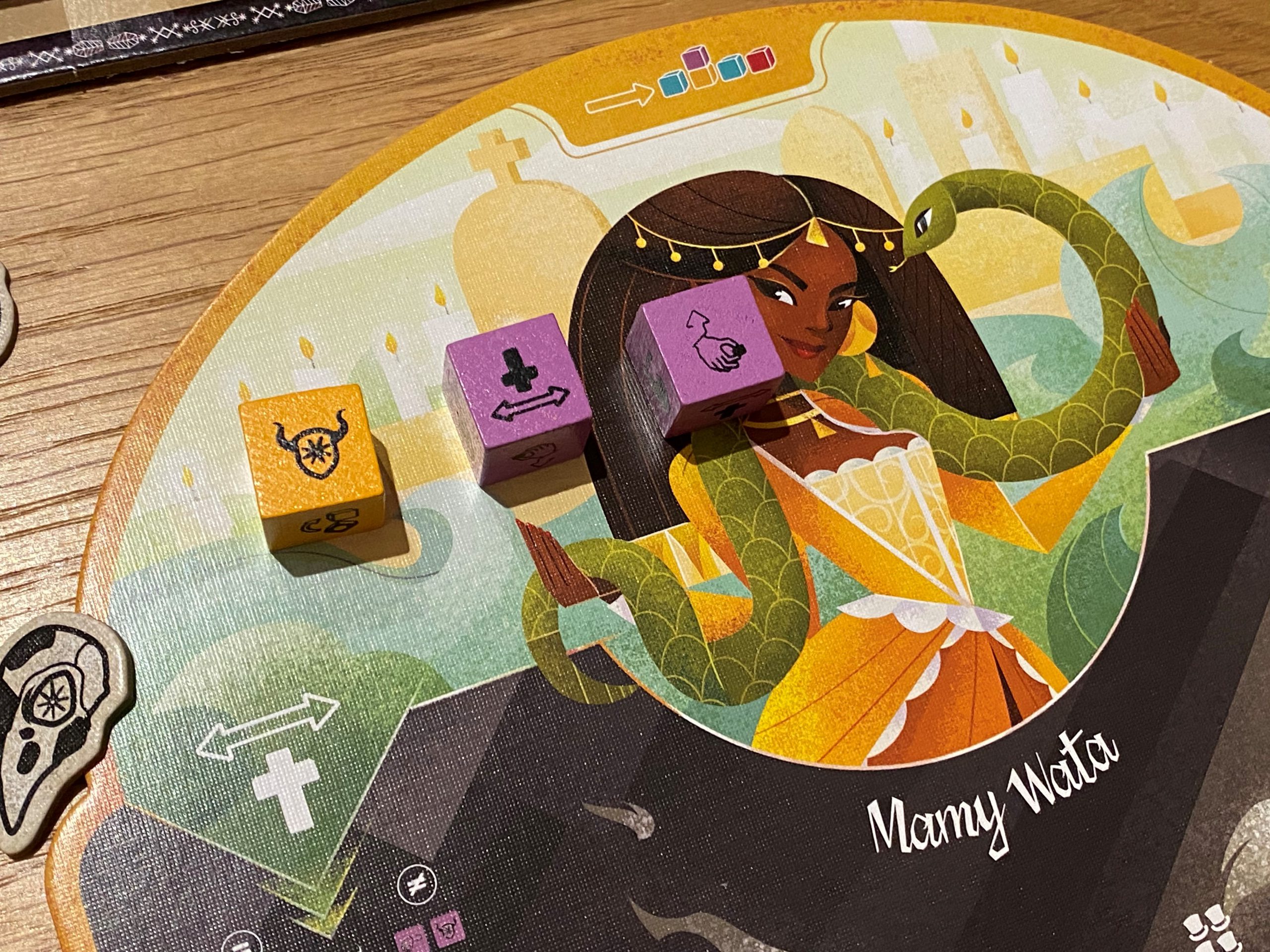 This tended to mean that I preferred playing Baron Voodoo with just one other player, since the change that could happen between my turns was limited to one Loa power, one capture and one dice effect (unless my opponent spent two offerings to take a second turn). With four players, Baron Voodoo becomes incredibly confusing from a planning perspective, and there’s so much change turn to turn that you simply cannot predict what you’ll be doing on your next turn.

The only other real downside to Baron Voodoo is the manual, which I am sad to say has been poorly translated. There are a number of unclear aspects that have had to be clarified by the publisher, and my first few games were played with a very different interpretation of the rules than that which I have now settled on. Knowing Lucky Duck Games, I’d expect this to be fixed in a second printing, but it’s a shame given the otherwise really high production quality on offer here. 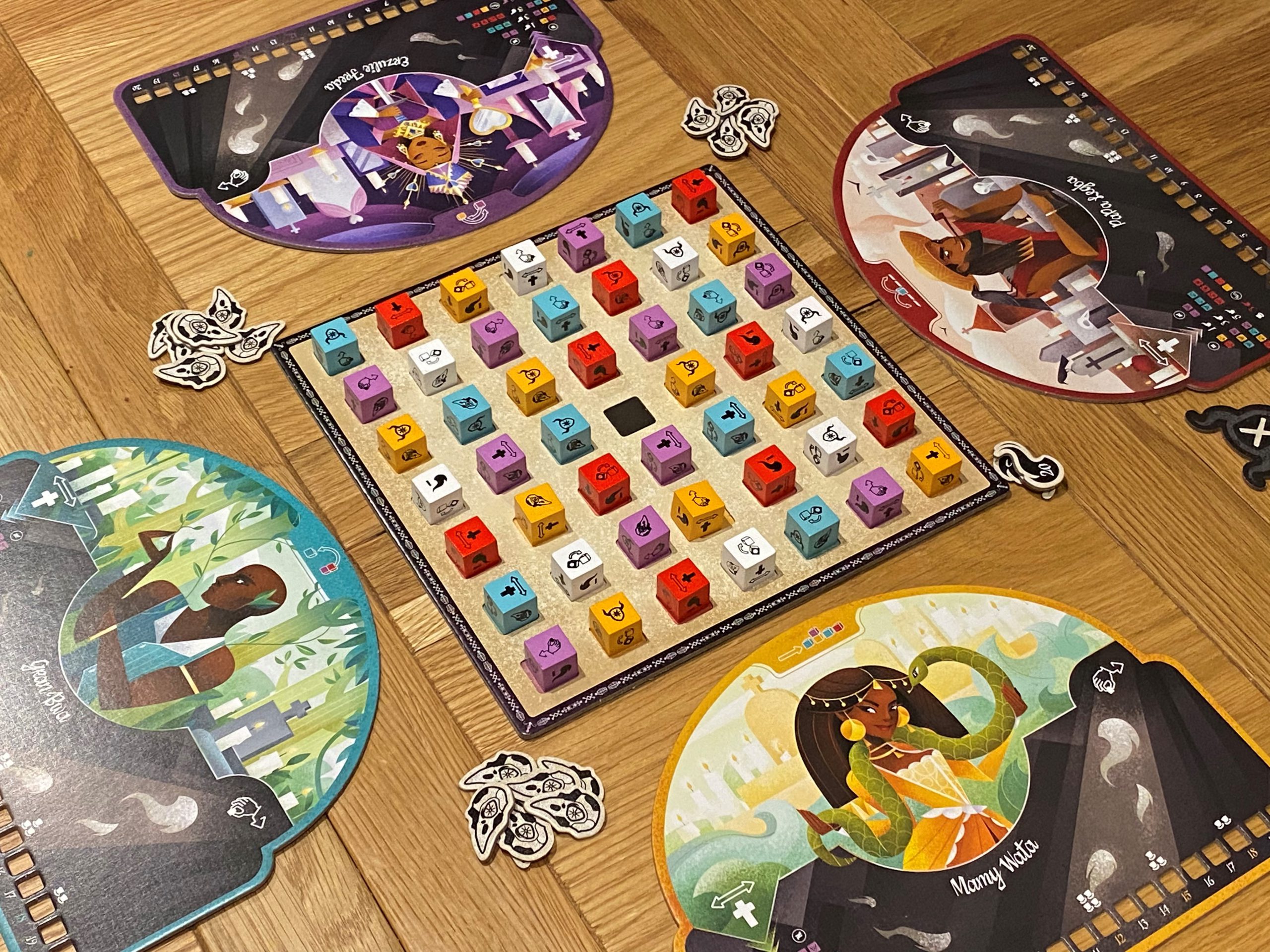 Baron Voodoo isn’t going to win any awards for its design, I don’t think, but it does take an interesting theme, some excellent artwork and a very unique table presence and make a fun game out of them. There are issues with high player counts and some of the rules, but given that I’ve found the game to be more popular with younger players, the chaotic nature of three and four player games probably suits the audience anyway.

Overall, Baron Voodoo is a fun but unremarkable effort that perhaps looks a bit better than it plays. Even so, it has a place in some collections, especially among players in the eight to twelve bracket, and perhaps if we can get back to a relatively normal Christmas, there’ll be some mileage in the family weight gameplay that it offers.

You can purchase Baron Voodoo from BoardGameBliss.