Seeing Narrative & Tactics From a New Angle with Augmented Empire

Coatsink’s next title, Augmented Empire, was on show at EGX Rezzed earlier on this year, and I was extended the chance to go along and try it, as well as have a quick chat with the game’s Narrative Director, Jon Davies.

Augmented Empire really piqued my interest with its concept of a narrative adventure game meeting up with tactical (XCOM was cited, always a win) combat. It all takes place in a dystopian, cyberpunk city floating in the North Atlantic, where you oversee the recruitment and practices of a team of 6 miscreants from the city’s outcast, dreg-filled, lower-layers.

The story’s pitch drums up memories of Final Fantasy 7’s Avalanche and the slums they call home, hidden in the shadow of a -literal- upper class of citizen who live in wealth on the surface. Indeed, one of the main reasons I hold the 1997 game in such high regard is the rollercoaster-ride of that starting locale, the events which lead to you climbing Midgar’s plate, and the strife that you have to work through throughout the game’s narrative; not everything is clear, and most of the time you are too late, or ineffective. That was, at the time, pretty unheard of – with most games simply being underdog tales that never really set you back or make characters question their course.

Augmented Empire’s storytelling follows similar practices, with the Narrative Director – Jon Davies, heavily invested in building a story that follows a more literary structure and composition than that of most games. While at the booth he explained elements of the game world, its history, and the minimalistic glimpses at the past that are hidden throughout the player’s time in New Savanah, and later, in a presentation titled “Storytelling in Virtual Reality” he talked on not just the issues with the fixed viewpoint of VR, but also the traditional reward-coolstuff-reward structure that many games’ stories normally follow. 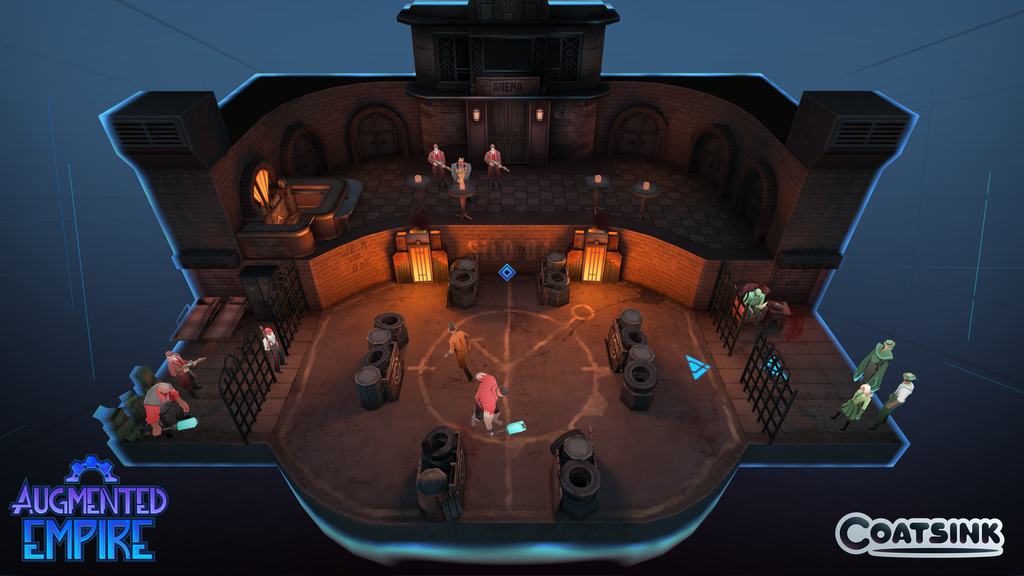 Oh – yes, Augmented Empire is in VR. On the Samsung Gear, to be precise. Coatsink’s history developing, and adapting, with VR is a core part of their identity. Something that, frankly, a few years back would have seemed not even slightly survivable, but here we are.

The Samsung Gear, for those unaware, was until recently a plastic case with a temple-level touch-pad, it was a simple case of dropping your phone in there, and it did the rest of the work for you. As such, movement in the games was always going to be a problem; but then first-person movement in VR remains either neglected or strangely disembodying in most cases. Both dangerous starts when it comes to games, which are such a popular form of escape due to their ability to immersive.

Augmented Empire, then, plays out in three parts; A first person experience within the office of the game’s protagonist, which adapts and changes as the story progresses; And the other two, various diaramas that the protagonist is looking down at from their office, one the game’s tactical combat, the other passive areas for brief bursts of story.

I say brief, because that’s the byword really when it comes to Coatsink’s take on the story. The setting should be deep and detailed, but the story should be imparted both in real time, and context driven. Davies’ pitch dictates that when we talk to an RPG NPC and walk away knowing all about their pet dog, the town’s founding, and armed with a quest to find a missing locket, that that’s strange and unrealistic, and no way to deepen a world. Instead, when we talk to people it is for a purpose, to extract information pertaining to our goals and motivations. -At least until the double-pack Waiting for a Bus Simulator, or Walking the Dog Simulator, launch. 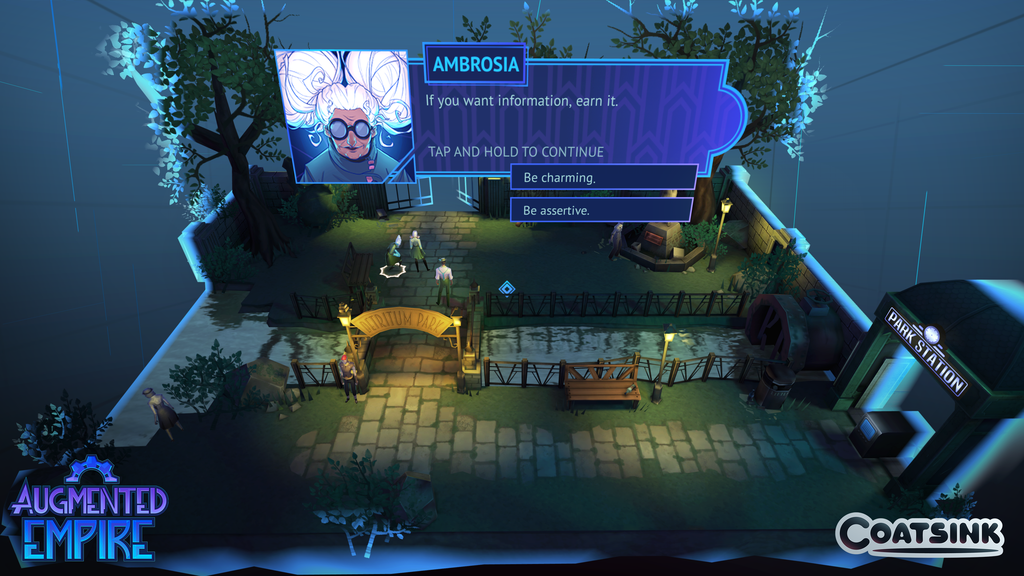 As such, with exposition kept to a minimum, flashbacks cut, and obscure requests filtered out, the game’s narrative is promised to be slick, and direct; a fluff-free, face-value journey through a story which follows the (as stated in the talk linked above) Monomyth literary hallmark. Indeed, even large parts of the world’s history much be eke’d out through inspecting level elements -plaques, terminals, and the like- which gives the game a degree of environmental storytelling.

While at Rezzed I got to play through a brief demo of the game; it didn’t give me any time in the first-person, office of the main character, which means I didn’t get to put form to the robot that serves as a disembodied narrator through the diorama sections of the game. What I did get to experience was the tactical play; two of them, to be precise, straddled around a mission to recruit a sharpshooter for an upcoming job, the same job that’s going to see you building up a party of six.

The combat wouldn’t be wholly unfamiliar who has played the modern XCOM games; two moves, get behind cover or get shot, flank to trap foes outside of cover. There are two major differences however, firstly, by default you’re pointing with your view, and giving the order (and menu selection) with a temple-tap — although the game will work with Gear controller, and you can synch a 360 wireless controller to the Gear. Pointing with your head’s angle feels a little bit strange at times, especially when an enemy is behind an object and the tracking doesn’t quite lock onto them. 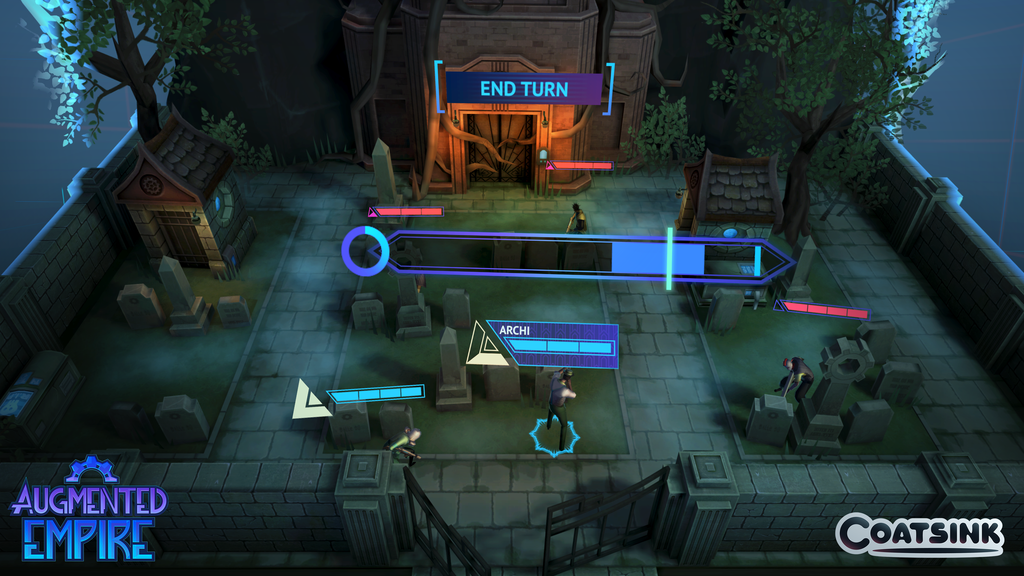 Secondly, while hits weren’t guaranteed they also weren’t visibly percentile based, with the variables which normally contribute to hit chance -range, angle, cover- all rolled into defining the difficulty of the QTE that follows. You’ve got about a second in which to tap the action button when it passes a hit, or critical, area of the bar in order to do the appropriate amount of damage; the same applies with defending, when you can completely evade attacks if you are adept.

As an idea, this is a really solid way to ensure that players stay engaged. However, the simple bar is rather basic considering the depth of detail that has gone in to the rest of the game (even if it was a crosshair closing in on a bullseye it would be a bit more engaging), and it also means that you need to keep your hand by your head almost all the time during combat; increasingly morseso when there are more enemies to move and attack in their turn.

Both of these negatives are negligble with the Gear’s optional controller -The nugget as Coatsink’s PR lead fondly called it- would serve not only as a replacement for the temple-tap, but also serve as a pointer in the game – with the view of the diorama still controlled by the head, and the gyro in the controller taking over the pointing duty. That said the tech remains expensive, even if it is vastly cheaper than the alternatives.

Outside of the sore arm combat was fun. The maps, while roughly rectangular in shape, had a variety of items to take cover behind, and had a nice verticality and level of detail to them that fit the diorama motif, and also made the levels feel carefully laid out. Story areas -and combat-areas once out of conflict- follow the same design principles, with each area light on the interactive point, and those that are present pertaining to historical events that the characters would likely already know, but that we don’t (a plaque, for instance), which is handled well.

My time with the game was fleeting, although the vertical slice that was given showed a lot of promise, specifically in how traditional Turn-based-tactic narrative was going to be squeezed down into a structured sub-ten hour package. Combat, as a fan of the genre, worked well, although I’d be interested in seeing what the new controller could do for the game. All in all it looks to be a tightly-bound little package which on a non-VR platform would be impressive mostly for it’s world & approach to story, but as a VR game is revolutionary, and very likely to become a killer-app.

Get Packed is another couch co-op about moving, but slightly more intense