Chaotic and much loved real-time tabletop game receives a dessert themed expansion, which is Kickstarting now!

Kitchen Rush is perhaps one of the most surprising tabletop successes of 2017, having already achieved both a nomination in the Golden Geek awards and the coveted Dice Tower Seal of Excellence. We haven’t played it yet (because it sold out so quickly) but it has a distinct similarity to the video game Overcooked, which is at its most enthralling when played with friends around a single console.

Just like Overcooked, players in Kitchen Rush must act in real time to manage a demanding kitchen. The workers in Kitchen Rush are represented by hourglasses, which are ingeniously used to represent the amount of time needed to complete specific tasks in specific sequences. The Piece of Cake expansion is designed to introduce a whole raft of new dessert options, represented by new tokens, a board extension and much more. 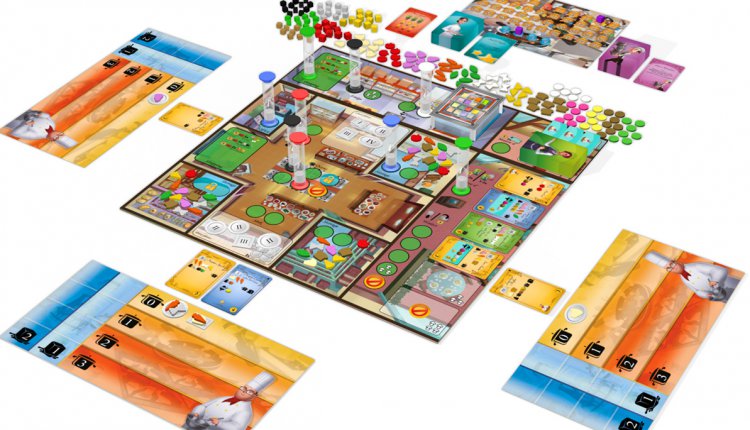 The Kickstarter blurb reads as follows:

1-4 players work together trying to fulfil orders fast enough to earn enough money to keep the business going across 4 rounds of 4 minutes. The fun, excitement and rush it brings to the table offers a full course for gamers and family members alike.

In the game, players use hourglasses (sandtimers) as their workers assigning them to various tasks from taking orders, cooking dishes and buying groceries. Any worker placed on an action space may not be used elsewhere before the sand within the hourglass runs out, making each decision important as time is limited.

Personally, I’m excited not only about the prospect of this new expansion, but even more so because included in the Kickstarter is the opportunity to double up and purchase a copy of the original game as well.

If you’re just as excited as I am, then you can back Artipia Games: Kitchen Rush: Piece of Cake by following this handy link.