It's time to halt traffic with your Oversize Loads!

When I was last with American Truck Simulator, in Oregon, I was folding paper in a Japanese-style… no wait, that’s origami. Since Oregon, a new DLC has emerged: Special Transport. Yes, there are already different levels and weights of types of cargo, but this is something very special indeed.

We’ve all seen them before — the extra-wide loads being escorted by their own company’s vehicles and/or police cars. You may or may not have spewed certain amounts of profanity about how long it takes to pass one of these monster caravans. You may have peed a little while passing, praying it doesn’t fall over onto your vehicle — because it certainly looks like it should. Whatever is on the trailer seems like too much weight regardless of what’s pulling it. You get stuck at an on-ramp because, “Oooh, the ‘Special Transport’ has the right-of-way and gets to go through first.” said mockingly and whiningly, like a five-year-old.

Since you can only get Special Transport missions from certain cities — of course, I started in Albuquerque… which isn’t one of them. Gallup, New Mexico looked like the closest. I certainly wasn’t going to dead-head it over there, so I chose the heaviest load possible to get paid for a trip to Gallup. This isn’t Euro Truck Simulator 2 in which I have a monster of a truck and even a three-man crew running for me. I wanted to see if my (basically) starter truck could pull a heavy load, how it handled, how the weight affected it, etc.

I picked up a Milling Machine which had the High Value, Articulated Trailer and Heavy Cargo (almost 100k pounds!) attributes. Just backing up to get it was a feat in itself. They had it crammed into a rather tight spot. By the time I got it onto the highway, my top speed was 47 mph — and that took me quite a few miles to build up, plus I was going downhill. Otherwise, I averaged about 40 mph… in a 75 mph zone. I guess I was over the minimum because I didn’t get pulled over for going too slow.

Luckily, when I got into Gallup, although it was very tight (two-lane), I only faced one 90 degree right turn — fortunately again — without any oncoming traffic. However, right before the delivery location, I faced an unexpected obstacle — an acute angle, hairpin left turn… just to get it delivered. Needless to say, but I’ll brag about it anyway, I made it all the way through without any damage to anything.

My first thought after dropping it off was to find a shop and beef up my truck — even though I only had about $30k. Then, I changed my mind. Instead of burning through all my dough, and considering the truck still may or may not have enough juice to pull a Special Transport, I decided to simply take a Quick Job — meaning I’d be using their truck and equipment. Plus, I knew the truck they had lined up for it would already be good to go.

There were only two Special Transport missions available out of Gallup. I chose to haul a truck chassis to Raton, New Mexico. I had really wanted to go west, but this would be okay for my first time. Wouldn’t you know, it had the same attributes as the job I just completed — High Value, Articulated Trailer and Heavy Cargo. Whew, glad I had some practice, at least with the weight. However, this would be my first outing with an Oversize Load and escorts.

Let's Load It Up! 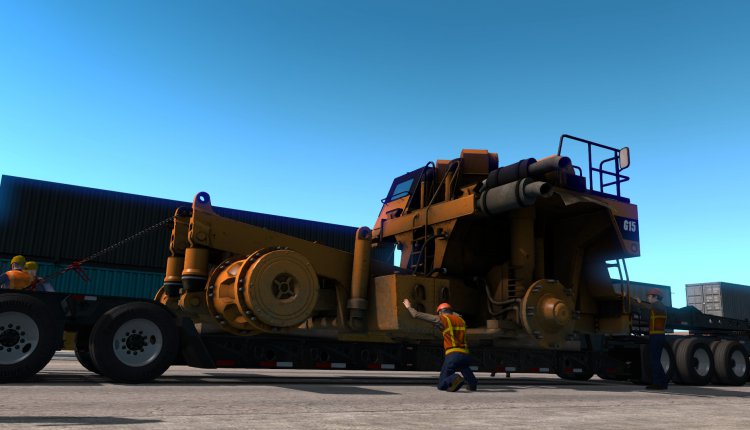 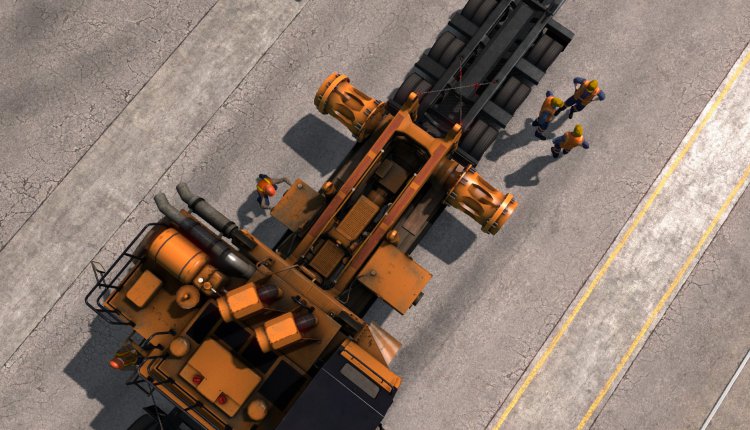 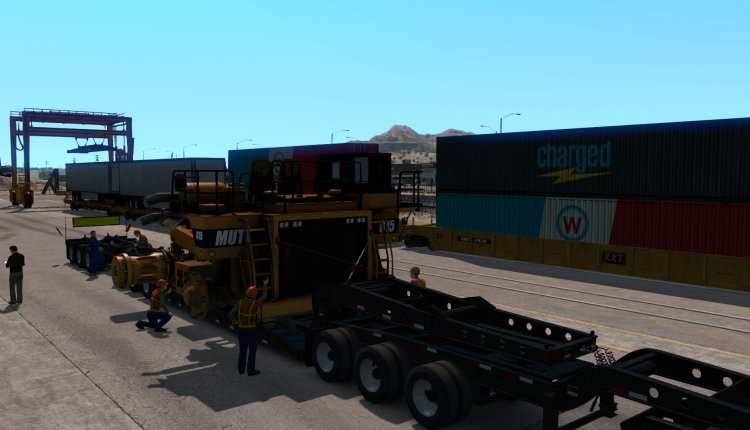 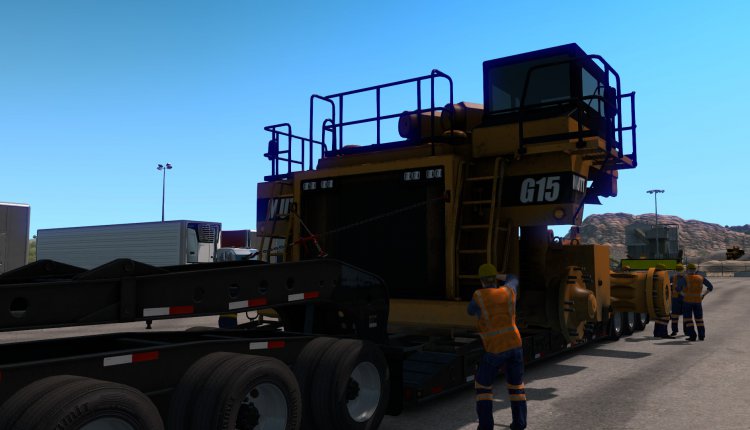 Coincidentally, I was leaving the same place I just dropped off the milling machine. Remember the hairpin left coming in? That means, literally right out of the gate, I was facing a hairpin right — while using unfamiliar, oversized equipment. Yeah, I might have peed a little.

One of the coolest parts of this whole journey is having the escorts. As you saw in the screenshot, we don’t have to stop and always have the right-of-way. They even had all the traffic blocked so we could get onto the on-ramp, hassle and traffic-free. To be more clear, not only were the local vehicles stopped, they had the highway shut down, just for my haul! Then, I peed out of both excitement and entitlement.

Also, remember from the screenie about not speeding and staying behind the escort vehicle? Umm, yeeeeaaaaahhh. That was not going to be a problem. I got to a whole 10 mph on the entry ramp. Once, while going downhill on the highway, we got all the way up to 42 mph. Just blazing, I know, right? For what it’s worth, I had absolutely no plans on changing lanes either — barring an accident or something else obscure that might happen. I was perfectly happy following the shepherd and staying in the right lane.

At one point, a red Mustang did, what I thought was, cut off my guide rather abruptly. My first thought was, “Crap, now we’re going to have to sit and wait while the highway patrolman gives the ‘Stang a ticket.”. Whew. Luckily not, he just let him go. If I would have done that in real life, they would have pulled the whole convoy over just to ticket me. My luck is boundless.

Off for a little tangent: You know how time is sped up in both ATS and ETS 2? Otherwise, I doubt people would actually play them if it was all real-time. Anyway, the way this started — it was supposed to be a six and a half hour haul — I was extremely worried that, at these speeds, it was really going to take six and a half hours to do this run. Normally, in both games, I drive <hand-over-mouth muffled> ‘the posted speed limit’, so early on, it was freaking me out about how slowly we were progressing. No worries (or spoilers even) — it took about an hour and a half. Plus, that was with me both stopping a lot and obsessing over taking great screenshots.

Back to business. I am extremely impressed Special Transport is so well-crafted as well as thought-out. Just as in reality, the entire trip is laid out ahead of time, escort-wise. This is serious cargo and important business. Every, single time we approach any kind of intersection, on-ramp, possible traffic spot, etc, there is some sort of attendant sitting there, with traffic already halted.

We did end up having to change lanes a couple of times, generally after adjusting roads. Right, to get back into the slow lane after merging onto a road. Left, to get out of a right-turn-only exit ramp lane. It was smooth, I just had to slow down because the lead car did. No problems.

However, there was a very steep upgrade, on the four-lane highway even, just outside of Santa Rosa. The truck got all the way down to 8 mph. It handled it all right, but that Kenworth was gearing down like crazy, man.

When I finally saw the Raton sign, I thought, “Now the scary part is coming.” As always, I don’t know exactly where I’m going. It’s dark at 2:38 AM. I’ve never been to Raton before. Hopefully, the delivery will go smoothly.

It mostly went well, but the delivery spot was way in the back of the parking lot. I had to snake around quite a few buildings to get there. Yes, I had to back up a couple of times — articulated trailer, overloaded, etc. — but I made it, once again, without any damage. My first Special Transport assignment complete!

Obviously, I enjoyed Special Transport immensely. Not only do they have all the escorts in place (other than the ones traveling with me, of course), but they vary them as well. Sometimes, cars other times bikes… there were even extra vans and guides at the delivery spot. American Truck Simulator definitely outdid themselves with this one. I can only hope they add it to Euro Truck Simulator 2 as well… unless they haul oversized items differently in Europe. Do they? I have no clue about that. Regardless, it’s a blast driving them around in the States. Plus it pays very well too. 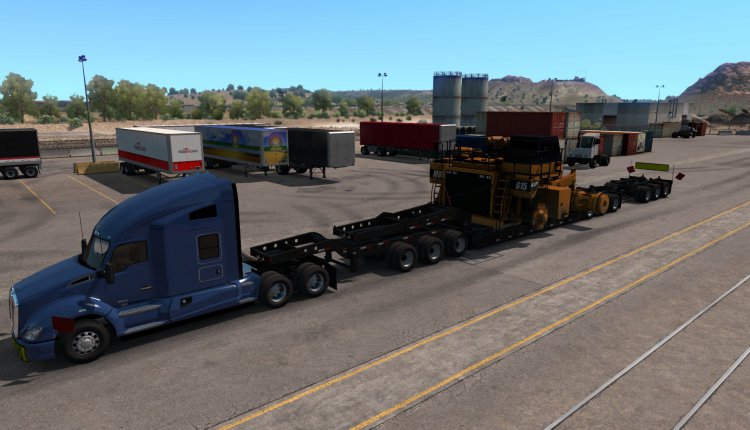 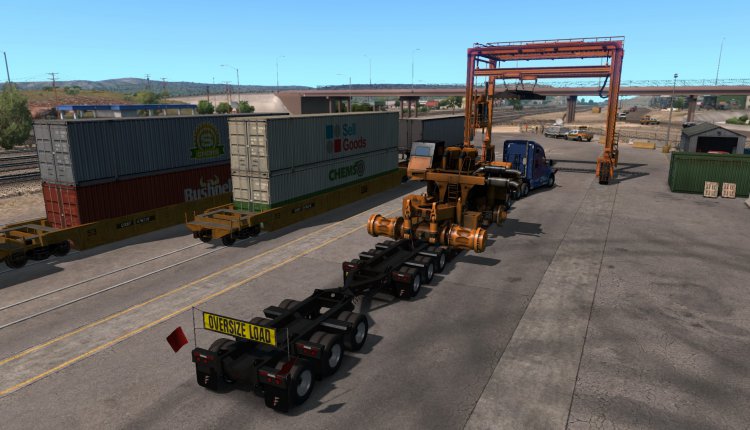 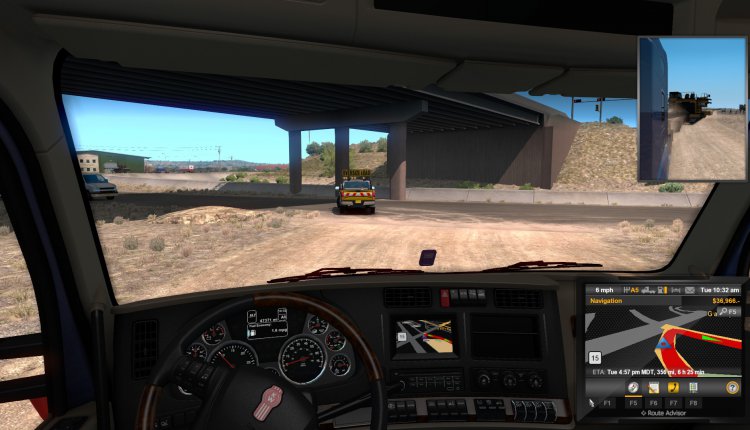 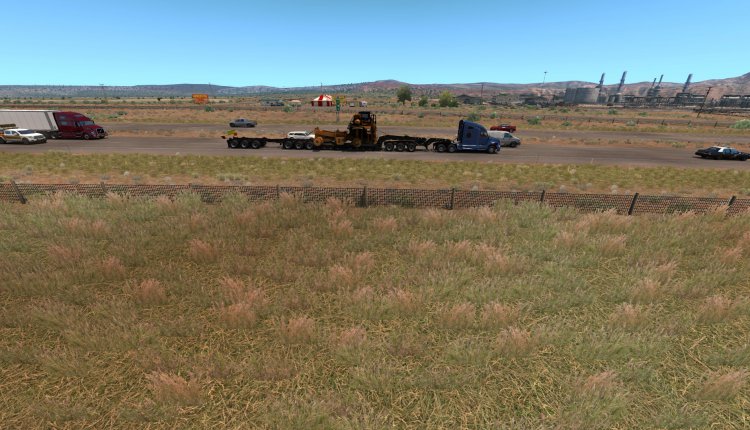 Putting down the highway. 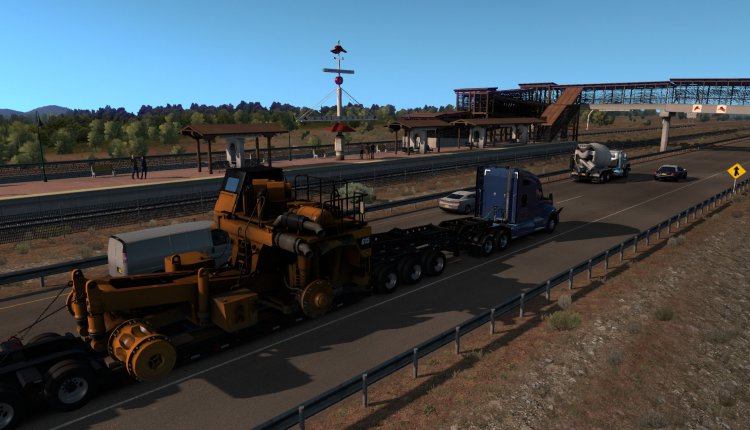 Sometimes, a guy just wants to take a beautiful shot.