Alex Kidd in Miracle World DX punches as hard, and short, as the original

The original Alex Kidd launched in the second half of the 80s and was perhaps best known because it was pre-installed on a lot of the Master System consoles. Alex Kidd in Miracle World DX is an in-depth remaster of the original game, complete with a few modern conveniences.

Sega has had a fair few iconic characters over the years, from Opa-Opa through to Kazuma Kiryu, but while Sonic gets the majority of the limelight, for the five years before he took the stage it was Alex Kidd who was the poster child for Sega. He had a decent run, with a handful of games, most of which were platformers. These were pre-Sonic platformers though, appearing on the scene a year after Mario Bros, and notably, shortly after a major arcade slump.

The reason for mentioning all of this is because Alex Kidd in Miracle World — while fondly remembered, if in part due to it being pre-installed on many Master Systems — still feels a lot like an early platformer. It feels like Strider, Rolling Thunder, Wonder Boy, in that it doesn’t hesitate to punish you if you don’t adapt fast enough. On the home console, this is fine, you learn through repetition, and even if you can’t feed more coins in to keep going, you’ll eventually run into that Ghost Boss, or Bandit Boss, or tricky, floating-flame bit enough times to learn it and become fantastic at the game. It’s how old games were, you stuck with it to keep pushing forward.

In 2021 that’s jarring though. I’m not saying that players these days are spoiled, I’m saying that the way we’ve played games has changed. Alex Kidd in Miracle World DX is a phenomenal remaster of a game that was universally loved in the past. The remaster puts a fantastic shine on it, and retunes the music, making it into a package that’s much stronger than the original, even while staring at it through rose-tinted glasses of nostalgia. It even includes the original, in part, having the option to flick back to the original’s graphics and audio. It even adds story elements to the game where they weren’t there before, a lot of care has gone into it. 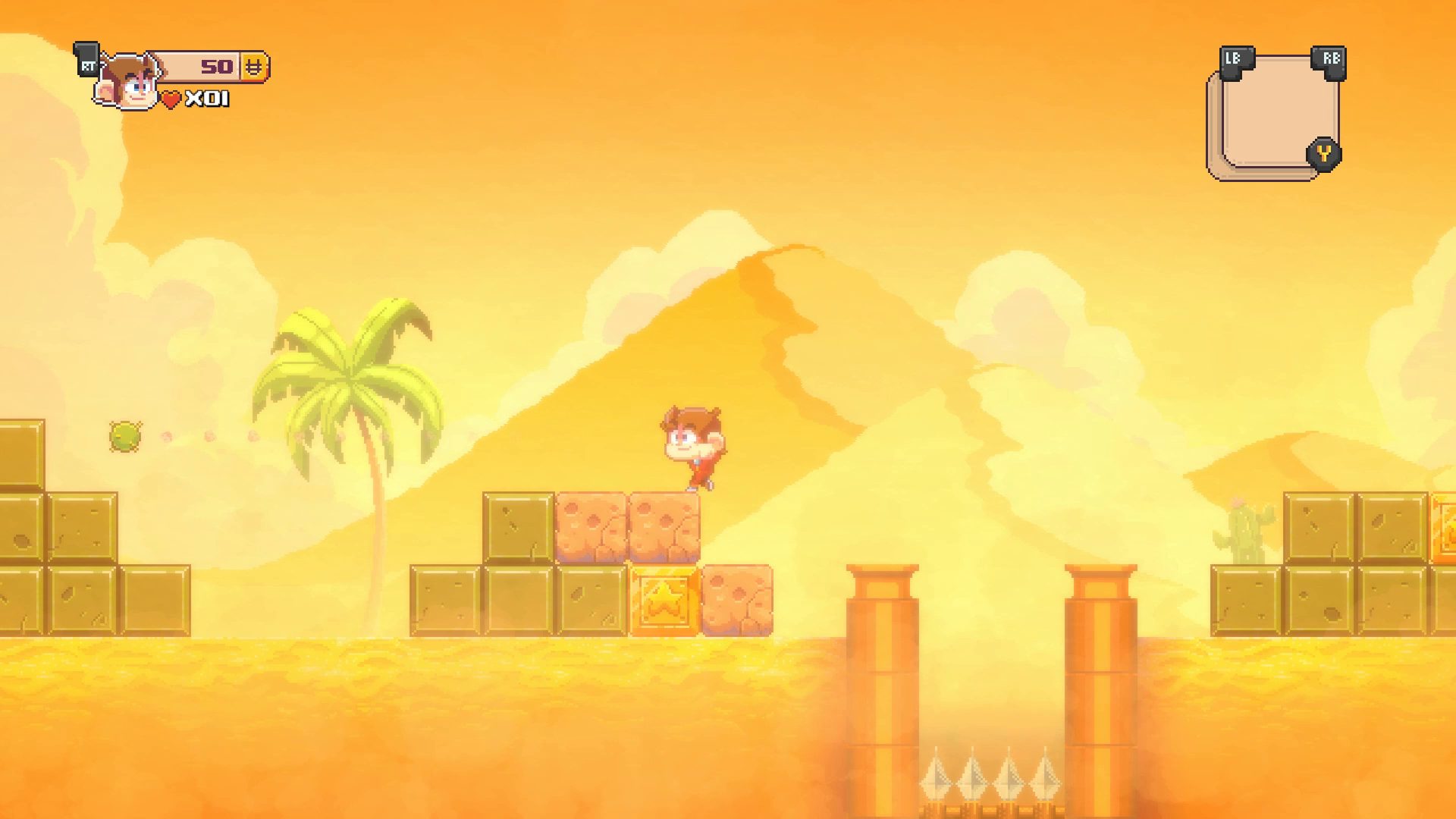 If you get me talking about old games, especially Master System games, then it’s normally only a matter of time before I get on to talking about how Lizardcube set a new, high standard for retro remasters with Wonder Boy: The Dragon’s Trap, alternately I’ll nudge you toward Double Dragon Neon, WayForward’s twist on the 1988 console release of the arcade series.

However, Dragon’s Trap is an adventure game — heck, it’s Metroidvania before the name came to be — and Double Dragon Neon had lots of work done to it in order to modernise it, although the beat-em-up formula still works well with arcade sensibilities. The platform genre moved away from that coin-slot difficulty for several console generations, before returning to it with masocore platformers and pixel-platformers due to the massive indie movement in the 00s.

So, Alex Kidd in Miracle World DX occupies a weird space. It’s a masterful upgrade to a retro-classic that was on-par with industry difficulty at the time. But, looking at it through the new lens it feels out of date with the industry. Probably the same jarring effect that some people found when they first started Cuphead, or when they start up the latest Metal Slug iteration. 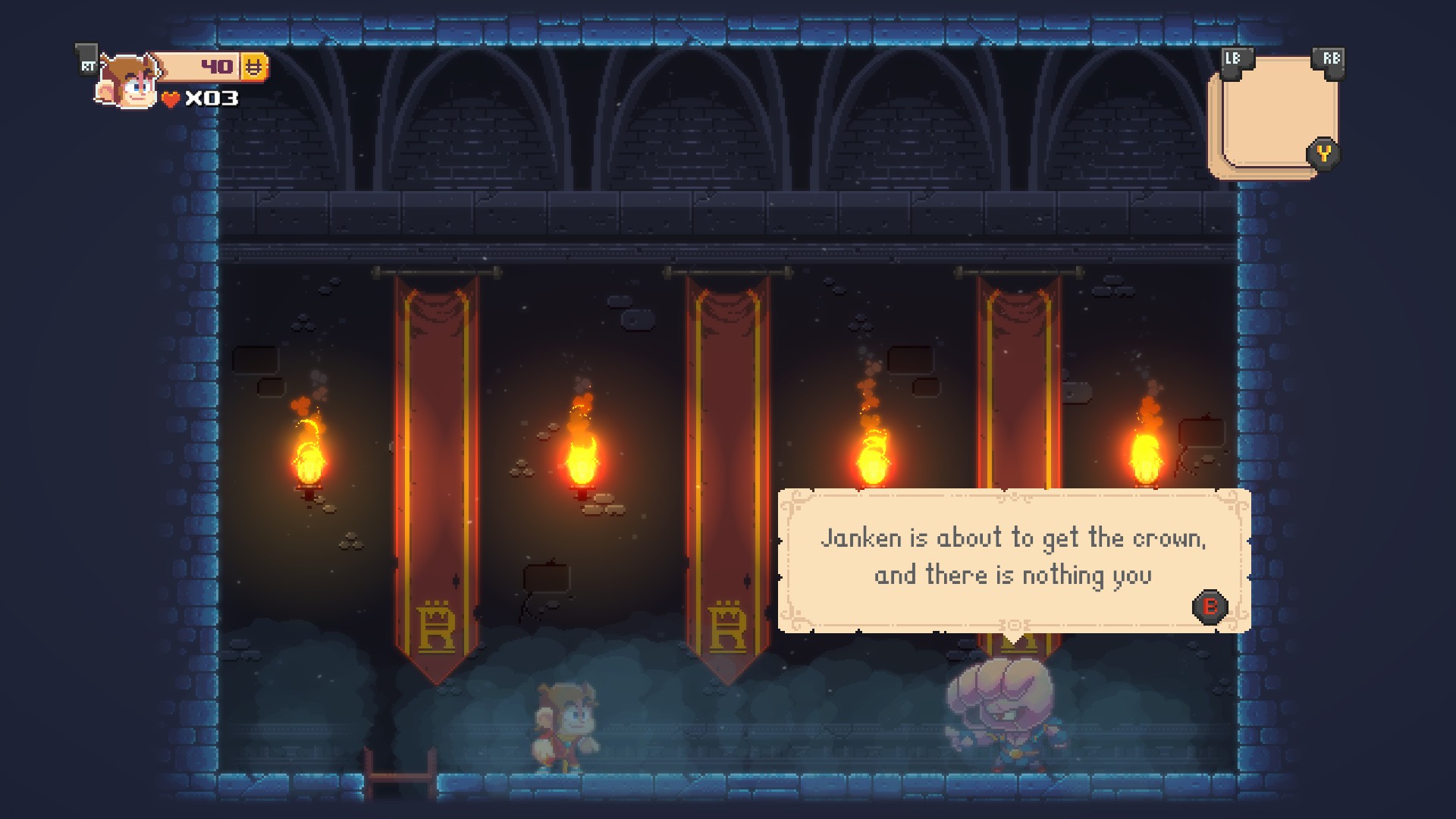 But, it’s the same game as before. So, you quickly learn that you have to jump the holes, you have to get a three- or four-block run-up in order to punch higher, you learn that your vehicles become useless when they collide with the circular pips. It was never versatile design, you had to learn as you went, and that’s still there. It’s a game that some people might bounce off of quite hard because we do signalling, and tutorials better these days.

That’s probably why there’s an infinite lives mode, accessible through the options menu. Whiel this doesn’t play the gameplay elements, it does add a degree of persistence. Once your lives are up you can restart (you can also load in from the main menu) at the start of the level, with any story items still in your inventory. This is especially useful in areas like the Radaxian Castle, which is a maze-like section that appears about mid-game, suddenly altering the pacing. These moments, as well as the unforgiving bosses will take new players a while to master, and so this mode is likely going to be a welcome salve. 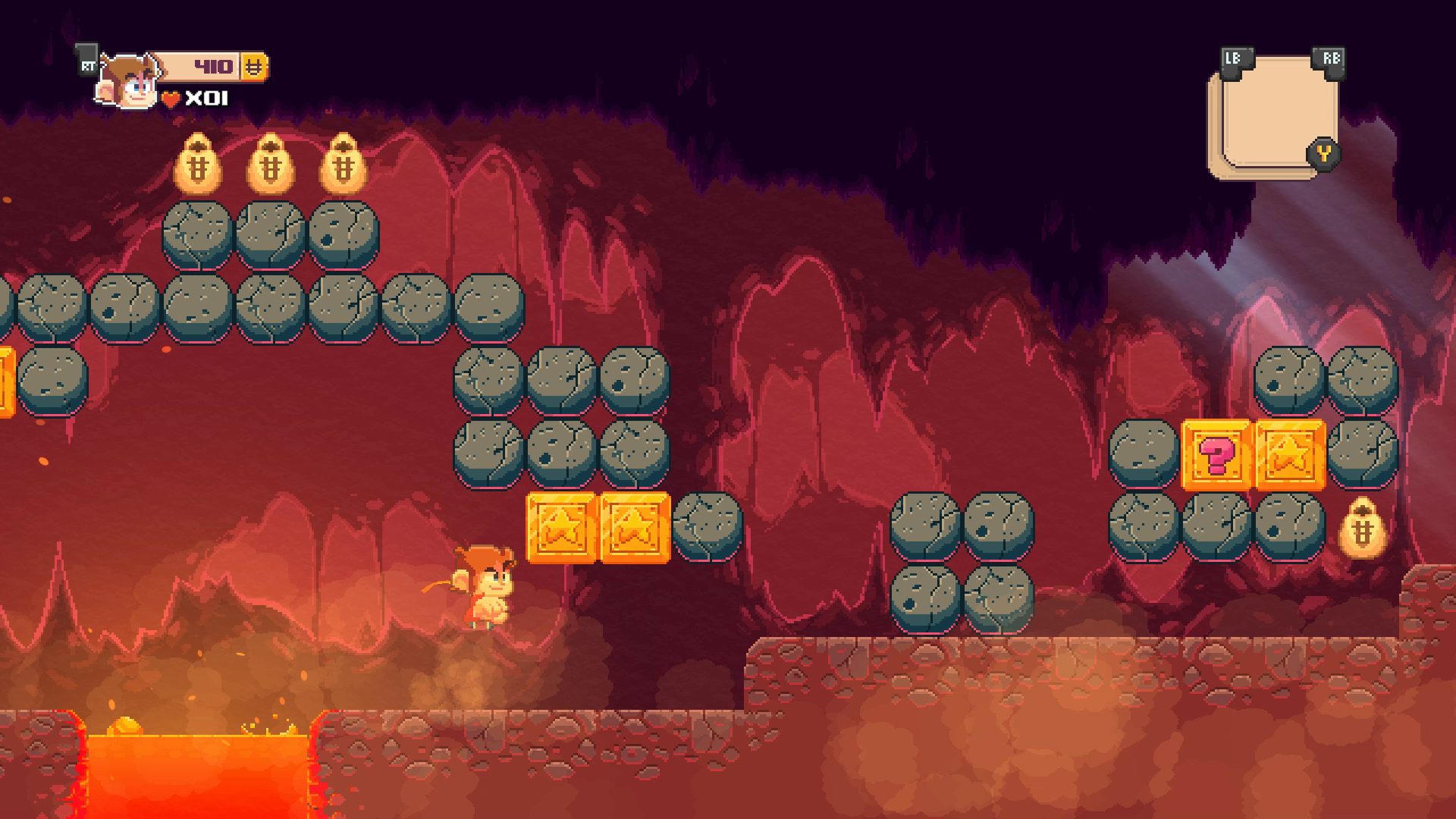 Complete the game and you’ll unlock two new modes; a classic mode, which is closer to the original and misses some of the new features (like the ability to use items without crawling through a pause menu), as well as a boss rush mode.

Alex Kidd in Miracle World DX is a brilliant remaster from a team who clearly, passionately care about the original game. Alex is still a just-over-one-block tall hero who punches a tiny bit over his own width. The new visuals look great (and include cute upgrades, like him alternating punching hands), however, the game is still as punishing as ever, and that might push some new players away.