Agricola (Revised Edition) is Uwe Rosenberg at his best, but is it fun?

You wouldn’t think that 17th century subsistence farming would make for an interesting game setting, would you? Yet somehow, Agricola manages to not only be interesting — but also extremely compelling and ridiculously tense. Why, you ask? Because it’s a point salad in which there are loads of ways to lose points as well as gain them. But, is what was fun in 2007 still fun in 2022?

Well, I guess that depends on your definition of fun, really. Agricola is a game in which everyone takes on the role of a family smallholding that consists of two wooden rooms and two family members. Over the course of sixteen rounds, the players will place these family members (represented by disks) onto work spaces on a communal board, allowing them to take actions. 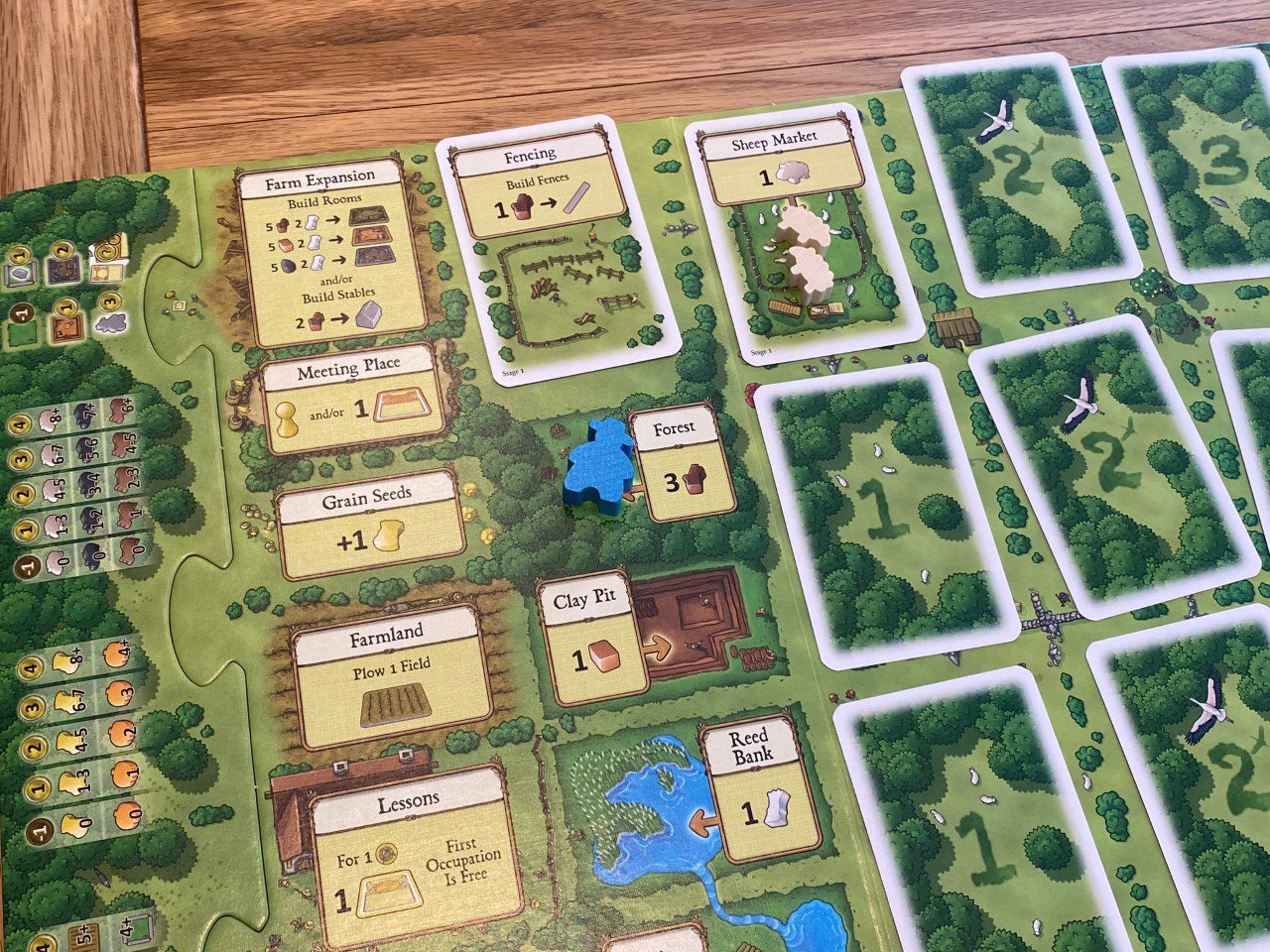 Examples include taking wood, clay, reed or food, as well as ploughing or sowing fields, learning new occupations or making improvements. There are lots more actions that may appear over the course of the game, and to name just a few, these include building fences and stables, upgrading or expanding the house, planting grain or vegetables and crucially, expanding the family.

When I say “may appear” over the course of the game, that is literally what I mean. Whilst there are a number of work spaces available at the outset of any game of Agricola (and these vary slightly based on player count) one new spac will appear with each new round. Most of the new spaces that appear are split into small groups of cards which are drawn randomly, so in some games you’ll see cards appear earlier in rounds than others – but crucially, these cards don’t change from one game to the next, and you will always see all of them sooner or later.

As with any good worker placement game, Agricola teases the players through two key mechanisms. Firstly, almost every space can only be occupied by one worker at any time, and this — especially early game — means that there will be audible sighs when someone takes the space that several others want. Secondly, as the game goes on and more spaces appear, the players (even if they expand their family to up to five members) will never feel as though they have enough actions.

This is because of a third action which is pretty unique to Agricola — that of the need to “feed the family.” In short, every game of Agricola features five Harvest phases where players draw grain and vegetables from their plots and add to their herds of animals (wherever they have a pair) which is really good. However, come the harvest, every family member must also be fed two food — and failure to feed them will result in a player having to take a begging card worth minus three points, and that’s very, very bad. 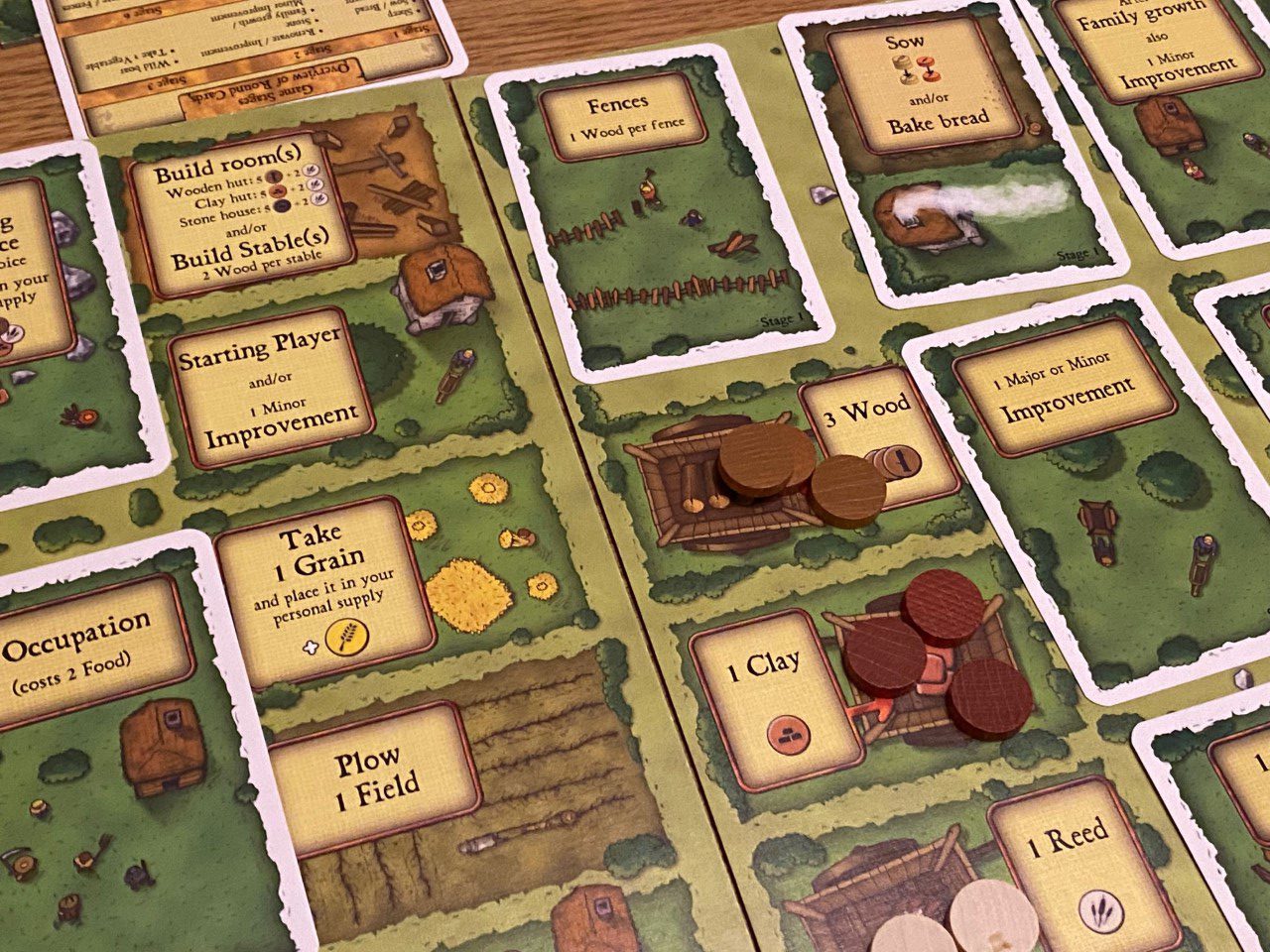 Why is it bad? Because a winning score in Agricola might be as little as thirty points or thereabouts. Players gain points for expanding and upgrading their house, for planting grain and vegetables, for maintaining each kind of animal (sheet, boar, cattle), for ensuring their farm spaces have something on them and for a number of the different improvement or occupation cards in the game.

None of the above is particularly unusual, but one thing about Agricola is that where a player ignores each of these things, they will usually lose points. For example, unless you find an occupation to the contrary, you will lose one point for every space you did not cover (with a pasture, field, stable or room) on your farm. If you have lots of sheep then you’ll gain a few points (good) but if you have no boar or cattle, you’ll lose one point for each.

Somehow, Agricola manages to balance the need to cover all of these aspects of farm operation with the jeopardy of having to feed the family. This creates the perfect setting against which to pitch the worker placement mechanisms — with turns unfolding around decisions like “do I grab the two food now, or build that improvement I really want and risk that someone else will take the food… If that happens, I’ll have to use one of my sheep to feed the family in two turns, and that might cost me one point, rather than three if I were to beg.”

That kind of example really is the tip of the iceberg, with Agricola being a game that really shines after you’ve played it several times. This is very nearly a zero luck game (with perhaps the occupation and improvement cards drawn being the only thing that might arguably give one player an unfair advantage). Somehow though, thanks to the variable draw of new spaces and the huge variation of occupation and improvement cards in the game, Agricola is never the game twice and there are “broken” strategies to win — especially not in this revised edition.

There’s little — and possibly nothing — to complain about with Agricola, with the only subjective issue perhaps being the art style. I’m not a massive fan of the very dry style used by Klemens Franz in a lot of his games, and thanks to the fact that farming in the 17th century is inherently dry anyway, the artwork here just feels quite.. Uninspiring. There’s nothing functionally wrong with it and the revised edition includes animeeples and veggie-meeples and so on, all of which brings a bit of colour and quality to the component set.

Agricola deserves its place as a seminal worker placement game alongside the likes of Lords of Waterdeep. Agricola is simple to learn, but also incredibly deep as you immerse yourself in the possibilities that it offers, and as such it’s a good game to introduce to someone who has lots of experience of a game like chess, for example. I wouldn’t call it a gateway game, but of course Agricola would also appeal to general hobby gamers, and it’s definitely still fun even after almost fifteen years.

You can find Agricola (Revised Edition) on Amazon.