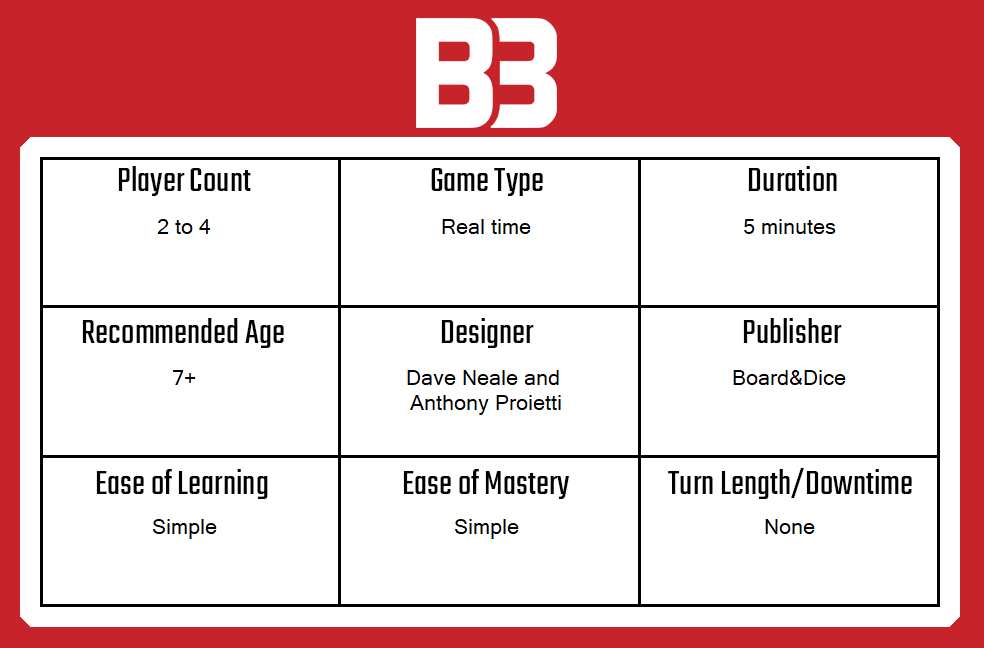 Think you don’t have time for a board game? Looking for something quick that slots in at the beginning or end (and sometimes middle) of your game night? Then maybe 5 Minute Chase is for you. A brand new real-time game from Board&Dice, this game really does take five minutes to play, but is it any good? Let’s find out!

5 Minute Chase is a Cops n’ Robbers style chase game which pits two players (or two teams of two, although that is clumsier) against each other in a brief, asymmetric and often exciting race. The game is split into two roles: that of The Chase and The Runner.

The Runner’s task is to place tiles onto the table, adhering to specific rules whilst attempting to get to their hideout. Along the way, The Runner needs to collect their keys, a map and some loot before actually placing their hideout tile, but that’s no more complex than placing the relevant tiles at the right moment.

The Chaser, on the other hand, needs to catch The Runner. To do so, they must look at the witness symbols on each tile and determine which of the four segments has the most witnesses facing the direction of the chase. Each tile segment has a matching red or blue symbol; The Chaser takes the one that matches the segment with most witnesses, then places it on the tile before moving onto the next one. If The Chaser reaches the tile The Runner is on, they cover it with their hand and (as long as all their tokens are above board) they win. 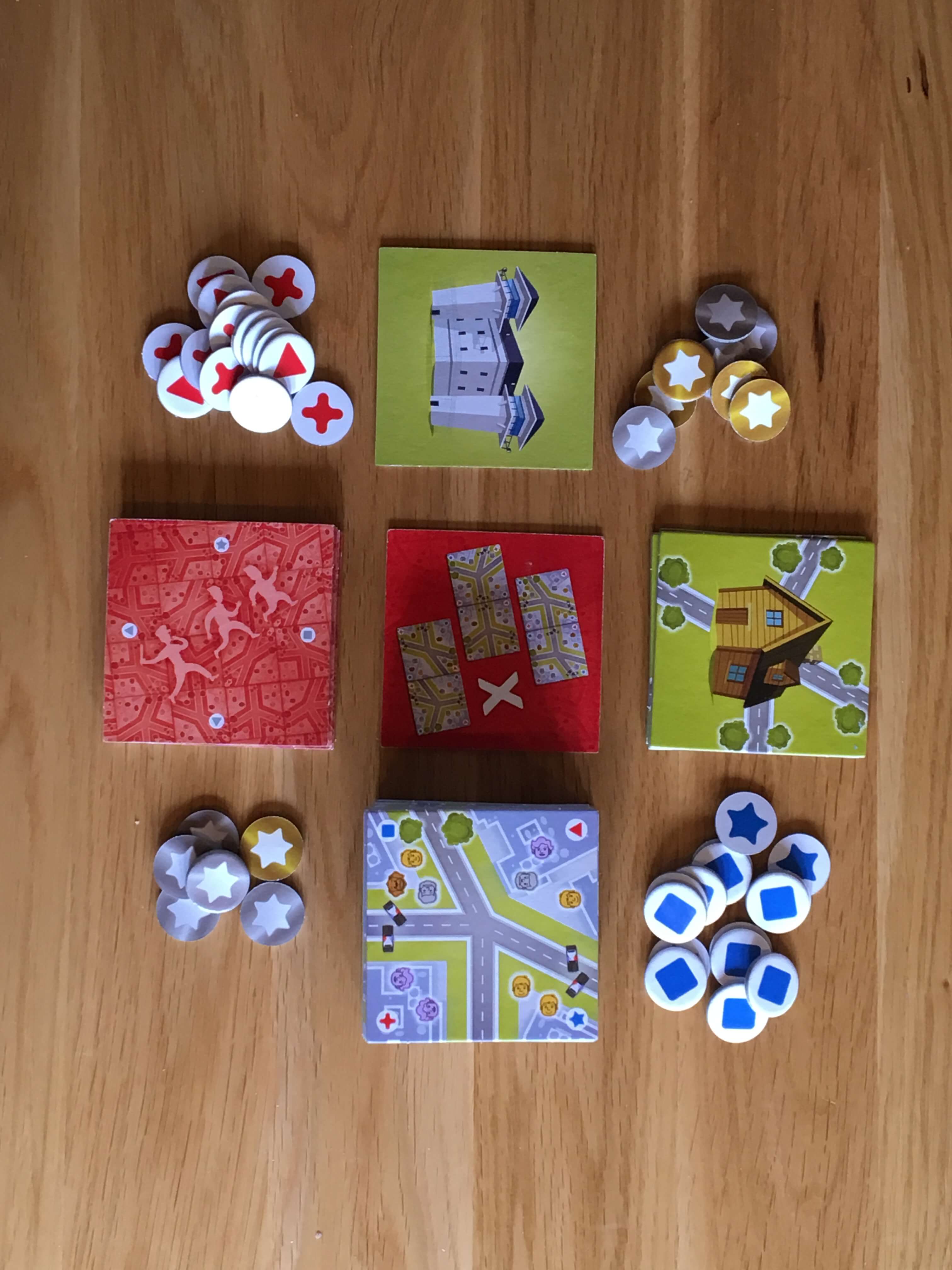 5 Minute Chase has an attractive, robust level of quality applied throughout, which is fitting given that the tiles are handled vigorously and often. The artwork is attractive and strikes a nice balance between clarity and complexity, which I think is intended to create the respective challenges of tile and token placement for players. I am fortunate enough to have fairly good eyesight when wearing glasses and I wouldn’t normally comment on something like this, but as I do play with a visually impaired gamer, I have to say that 5 Minute Chase isn’t fun for someone who struggles to see small symbols or subtle colours on a similar backdrop.

Given the price point, the overall quality of 5 Minute Chase is very reasonable. There is enough variety among the tiles that you’ll have your fill of the game for any particular sitting long before the actual layout of the chase begins to feel repetitive, whilst the number of tokens is never an issue. The manual is small, brief and relatively clear, although I do feel that it makes a slightly over-elaborate job of explaining what is actually a very simple game. Whilst it has no bearing on the game whatsoever, I did really like the way the inside of the box is decorated — it’s very cool indeed! 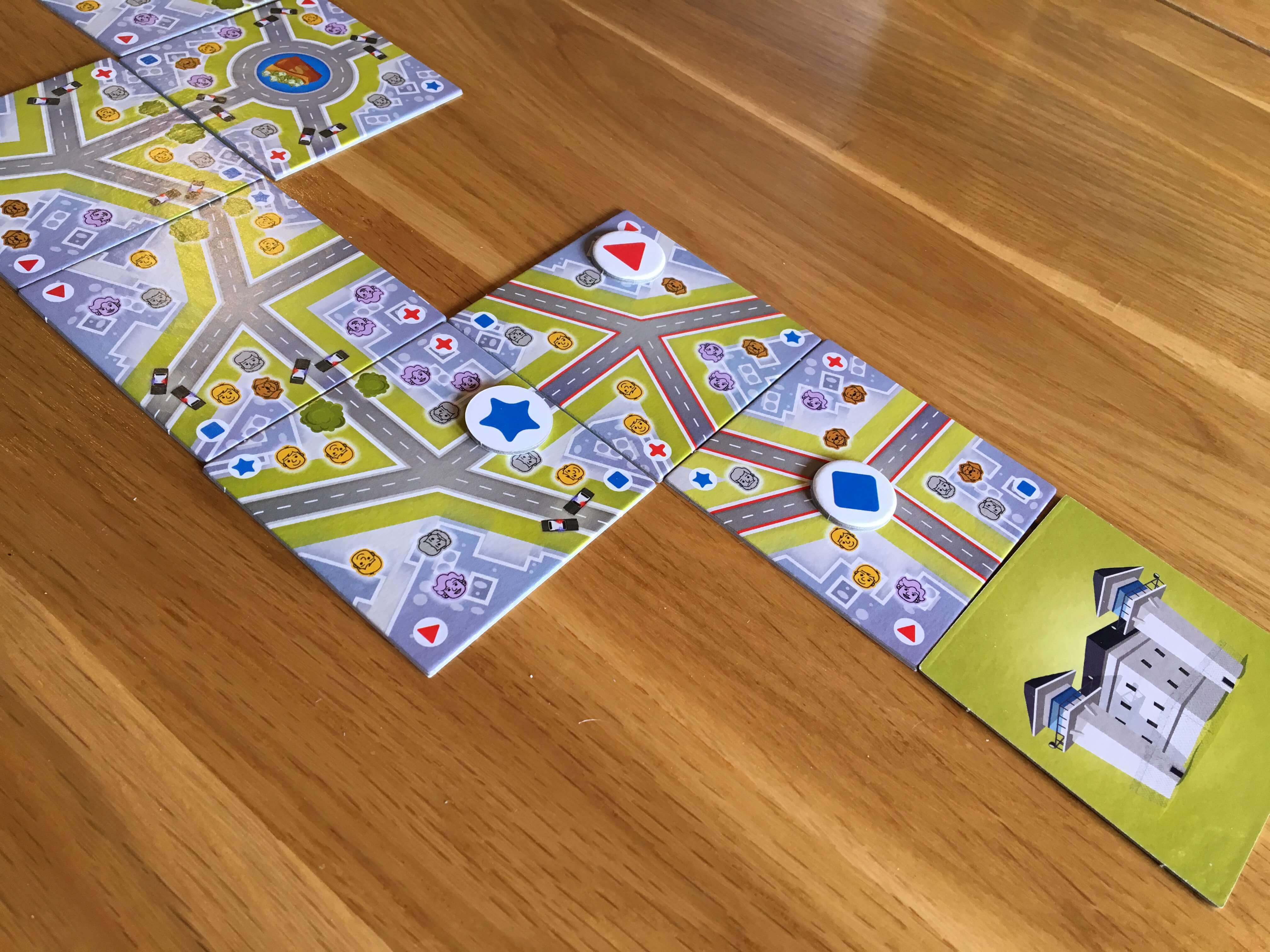 5 Minute Chase begins with a prison tile and two of the red-backed starting tiles chosen at random. Gameplay happens in real time, so as soon as someone says ‘go’, the players are active immediately. During your first two games, you’ll very likely notice that acting as The Runner is much more challenging to come to terms with than acting as The Chaser. The Runner has access to two evenly matched stacks of randomised tiles, but they can only hold one in their hand at a time, which they can examine and place according to the rules.

Most importantly, the tiles must be placed in such a way that roads match each other — but that’s the easy bit. The Runner must also examine police road blocks carefully. Junctions with police cars on them may only join with those that have trees, which sounds simple, but actually causes a second or two’s pause on fairly regular occasions, especially when players are first learning the game. There are two each of the map, keys and loot cards and, as I said earlier, they must be placed and passed through before The Runner can win.

The rules for The Chaser are no more complex than I explained in the overview and I do think that their job is easier. For the first three, four or even five games with any new player or pair of players, there is little doubt about who is going to win (The Chaser). It seems that the design team knew this was an issue, as the manual actually suggests setting up with three starting tiles, rather than two, as that gives The Runner a little bit more of a head start. Playing with three or four players introduces a team mechanic to either side (usually The Runners, if playing with three) and it may or may not help the difficulty for them, depending on how sensibly players approach the game. 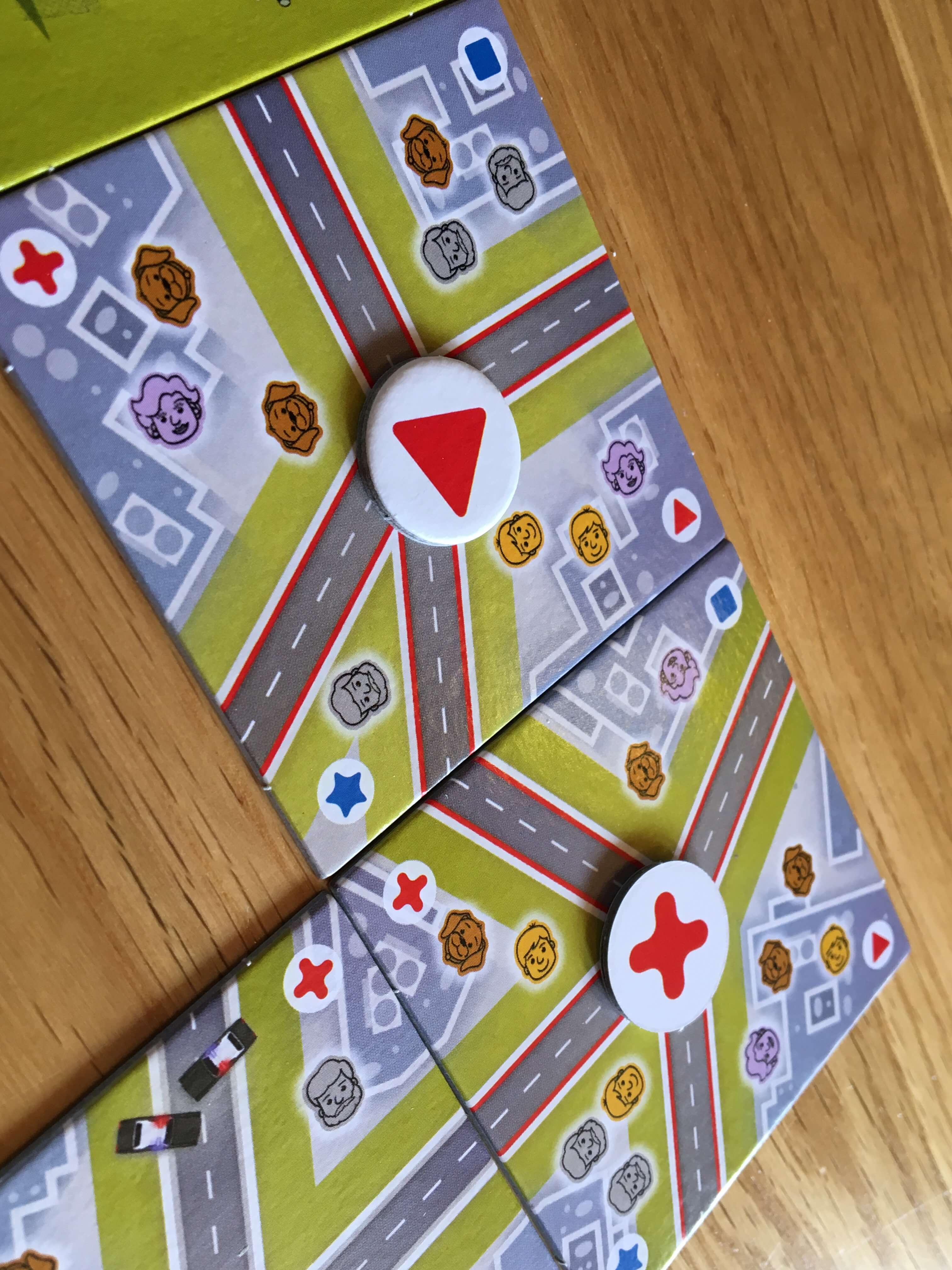 Considering that 5 Minute Chase does actually deliver the experience its name suggests, you should come into it with a pretty good idea of what you’re going to get. No one should pick this game up expecting an epic quest filled with twists and turns, but as a brief, exciting and often fun-filler or ice-breaker game, 5 Minute Chase does a great job. The slight downside is that whenever you break it out with a new group, they won’t get the full experience until several games in, which might just happen to be when you’re ready to pack it up and begin a bigger game.

Regardless, 5 Minute Chase is what it is and it delivers on its titular promise. It’s attractive, raucous and robust, which means that I think it will stand the test of time both physically and in terms of its appeal to players both new and returning. I generally resist real-time games, but again because 5 Minute Chase is so quick, it’s more or less impossible for it to outstay its welcome. If it sounds like your cup of tea, it probably is. Personally, I certainly enjoyed it.