By Dann Sullivan On Dec 31, 2017 0
My highest banked fever score, I still have no idea how I managed this.

Behold the Kickmen is to football as Pipe Dream is to plumbing: a non-representative, fun take on the subject which requires no prior knowledge. 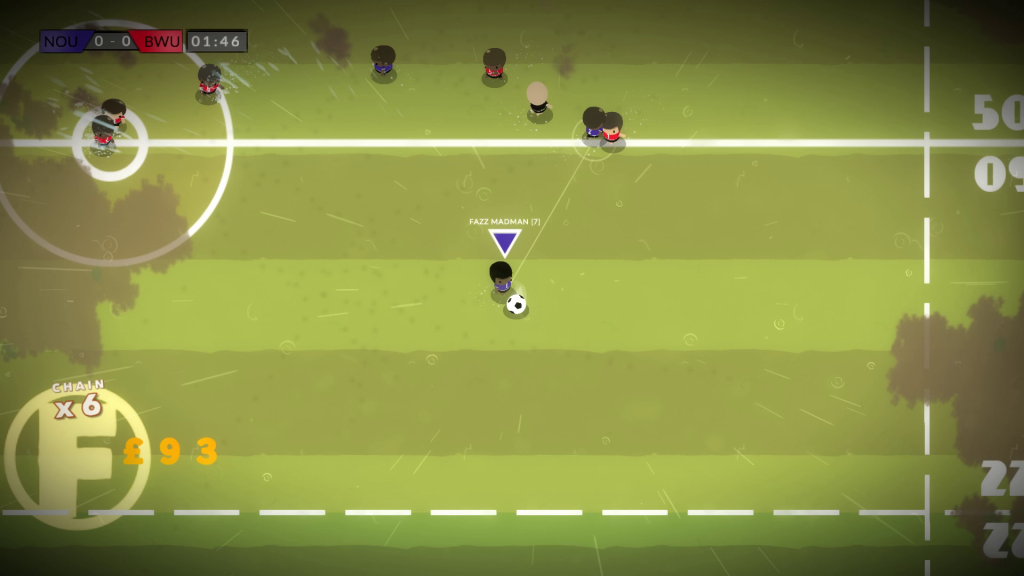 What likely started as a jokey take on the sudden surge of indie football games appearing on Steam ended up as an extremely fun, arcade-style sports game. However the main thing that sets the game out from the crowd is the game’s irreverence towards the sport it appears to represent. Sure, it keeps a loose hold on some of the core points of football: kicking a ball with your feet, goals at either end of the pitch, one member of each team can hold the ball and is in goal, there’s a rankings table and a few other bits and pieces, but the vast majority of the game is fantastically made up.

Interested in finding out more about Behold the Kickmen? Why not read our review from earlier this year.

We’re talking about things like a circular pitch, more goals for shooting from further afield and a referee who gives smooches when a player scores. It’s all played out to an amazing, thrumming electronic soundtrack from Tobey Evans (who made an equally impressive contribution to Size Five’s The Swindle). This leads to a  game which is vastly more memorable than its contemporaries, as it is intrinsically more than ‘just another football game’, like Speedball — a game it pays tribute to with a mode which reskins the game into a moody, cyber future.

It’s also memorable because it has a beat: traditional passing and the slow dance up the field is replaced with a combo system which means that continued possession and a slow defensive crawl up the field can result in a massive score when you do eventually put the goal into the net. Score, in Behold the Kickmen, translates directly into money, which you then use to upgrade your team in between matches. As such you need to not just ‘get by’ but instead start working combos into your play if you are playing a long season, as otherwise you’ll be vastly outmatched when you come up against the top teams.

What holds it all together is the fact that, aside from the dodges, massive slides and big kick abilities, this football game feels delightfully self-aware that it is a parody of the sport. The writing in the campaign mode — which follows a new footballer through the league, like FIFA’s The Journey mode — is loaded with silliness and idiocy, clearly exposing Size Five Games’ emergence point as a developer with their Ben There, Dan That point-and-click series which launched back in the noughties. It’s not just the story mode which the humour presents itself in; a tickertape rolls under the league table, churning out nonsense news of churlish and childish kickmen. The sponsors are silly, as are player and team names.

If you’re looking for an affordable sports game which doesn’t take itself seriously, then Behold the Kickmen is definitely worth consideration.