Chances are, if you have arrived at this review then you sit in one of two camps. Most people, I suspect, will be well aware of Wingspan already, and will want to know whether or not they should add Wingspan: Asia to their existing collection. The other group is perhaps completely new to Wingspan (or newish and wondering where to start) and is here to read about the new two player mode that it introduces. Spoiler alert, because there’s good news — I think it’s a great purchase regardless of which of these camps you might sit in.

For the uninitiated, Wingspan (and the existing European and Oceania expansions) are basically engine building games in which the players compete for hundreds of different bird cards, play them by spending appropriate foods, and then use their abilities to score the most points. Points come from the birds themselves, from eggs laid on the birds, from either hidden or public objective cards and from a few unique effects on certain bird cards. 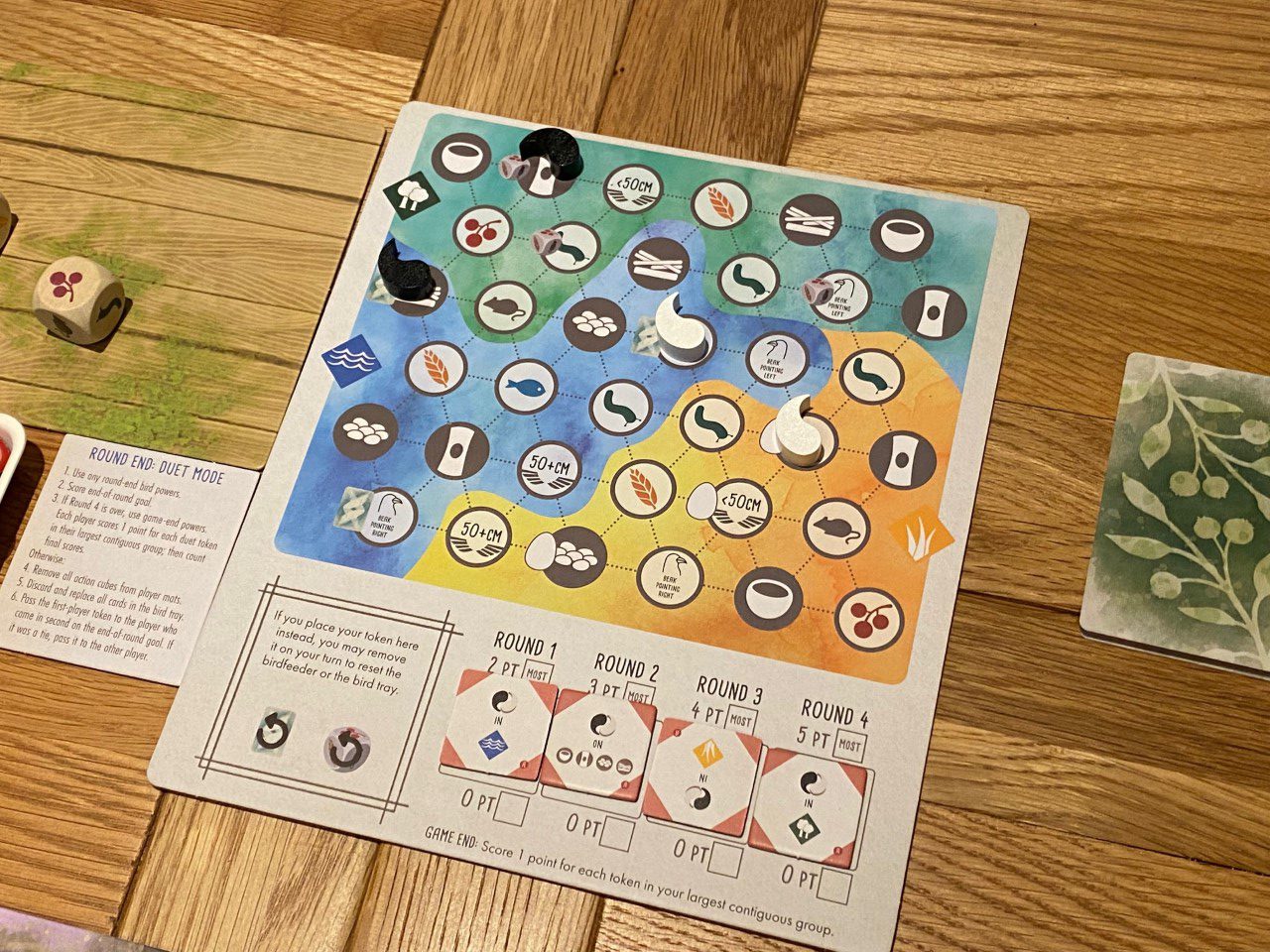 Despite being at least moderately complex (both mechanically and strategically), Wingspan has achieved mass appeal — potentially because of the beautiful artwork that pervades throughout, or maybe it’s the suspiciously edible looking miniature eggs? This success is what spawned the first two expansions, which in main simply added more birds from their respective locations, plus new objectives with them. Wingspan: Oceania did bring in a wild food resource, but aside from that, they felt quite familiar.

Wingspan: Asia takes things in a slightly different direction — although it does (thankfully) contain a whole load of new birds and some lovely pink eggs as well. In this box we get two new player boards (double-sided to feature both the wild nectar variant and the regular board), some more food dice, some eggs, and a central board to support the new two player variant. There are also new pink eggs, bird cards, objective cards and round objective tokens, an automa deck, a rule book, two quick start guides and some ancillary components… Phew — it’s actually quite a lot! 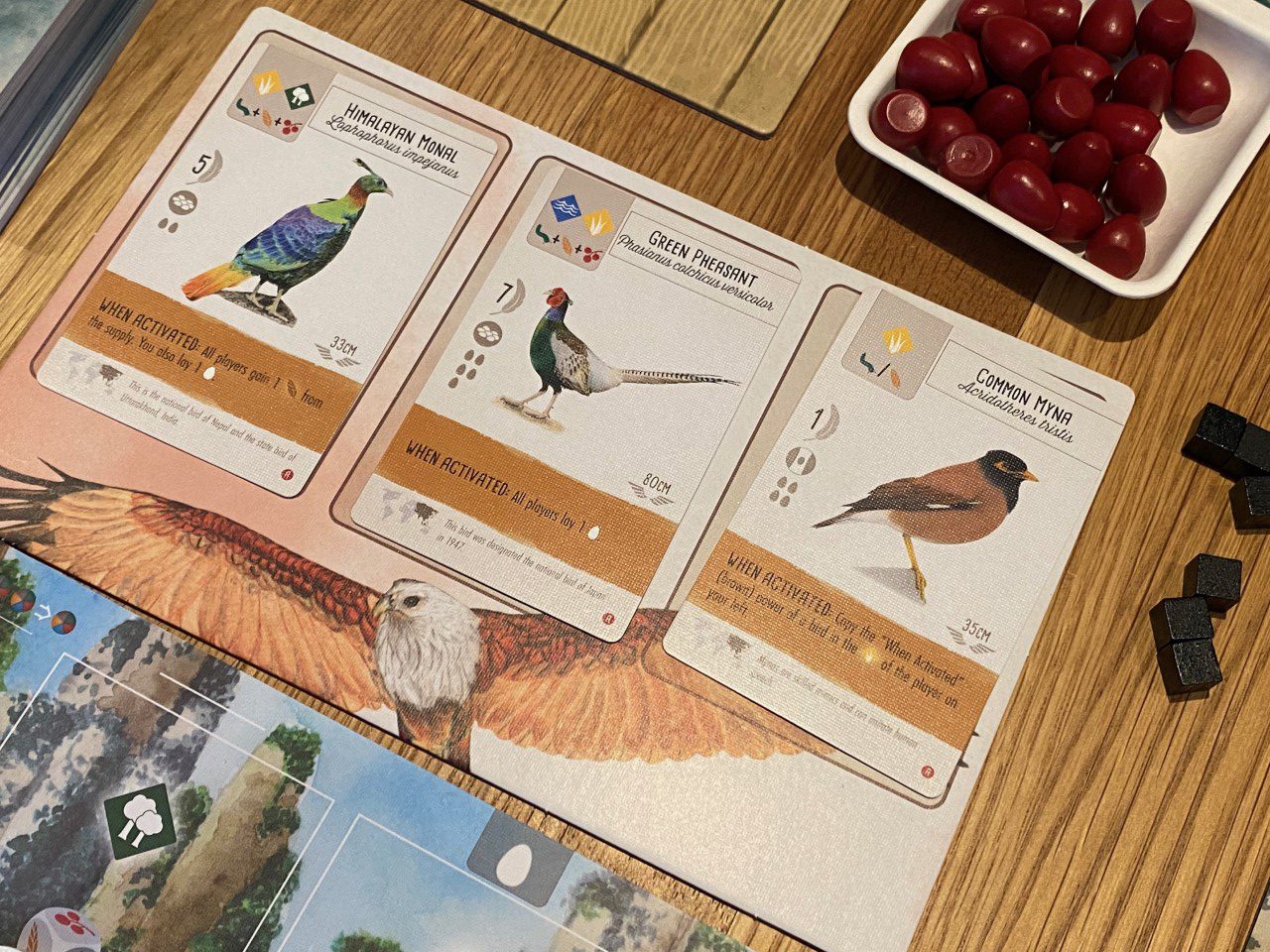 The new player boards serve a dual purpose — allowing Wingspan: Asia to standalone as a two player game (supported by the central board and unique round objectives) and because they add to those in either the base game or Oceania expansion to create the 6-7 player Flock Mode. With three, four or five players, players can of course just use the new bird cards and objectives to augment whatever Wingspan products they already have, whether that’s just the base game, or the base game and one or both of the existing expansions.

Let’s talk about the two player mode to start with — mainly because I’ve actually played it! With this mode, Wingspan: Asia corrects a minor problem that Wingspan has always had with two players — which is that players will focus almost entirely on their own board and barely look up to see what their opponent is doing. Now, the new central board brings a host of locations that must be filled based on certain conditions — the placement of your bird, the type of nest it builds, the kind of food it eats (etc) — and bonus points and effects can be won. 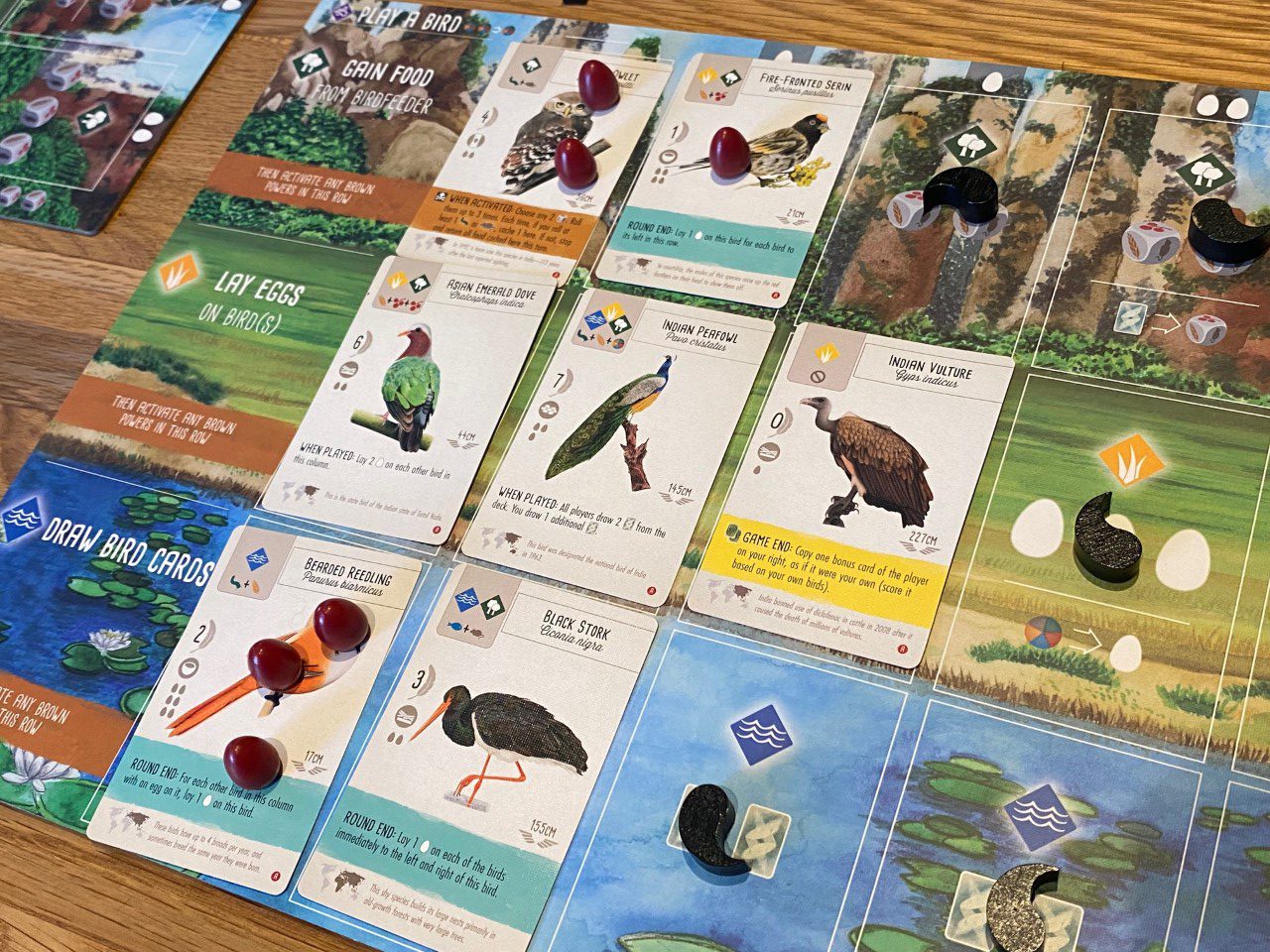 The players will fill this board as a consequence of their bird placement anyway, but if one player is left to fill out certain areas then they will score much more. A player placing birds carelessly may also find themselves locked out of placing tokens on this board — and that’s a wasted opportunity. This isn’t revolutionary stuff, but that’s also a good thing — you’re just doing things you would be doing anyway, only now, the where and when decision around placing your birds has to consider that central board.

As for Flock Mode, well I am afraid I can only theorise on this one. You see, whilst Wingspan has the challenge of a lack of interaction at two players, it has the problem of downtime at four and especially at five players. Flock Mode doesn’t solve this, but it allows the game to span (see what I did there) up to seven players, with two players on opposite sides of the table active at the same time. This is controlled by a dial that is also included in the Wingspan: Asia box. 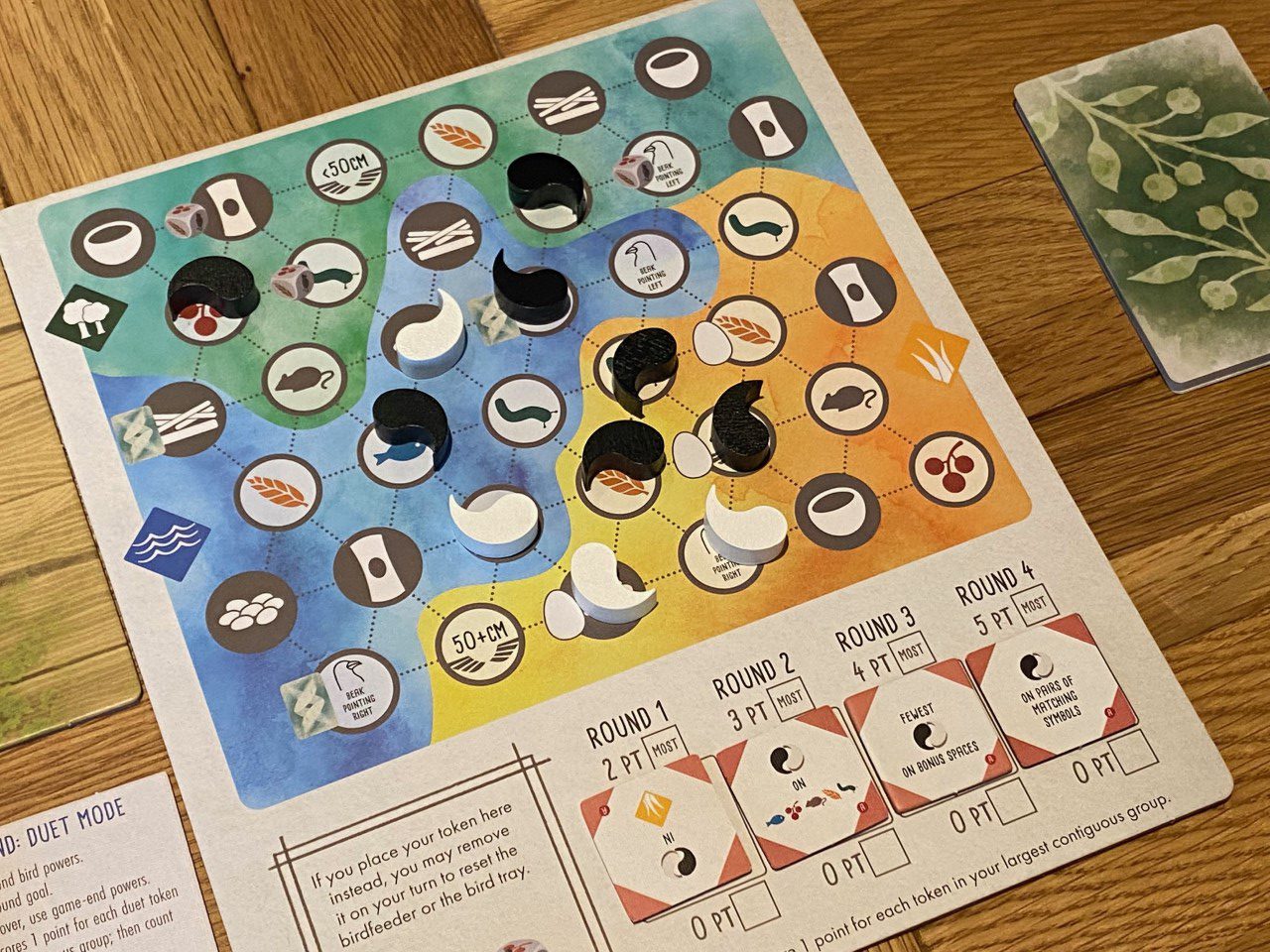 One of the challenges with “big game” Wingspan is management of the game state. Many of the card abilities do things like add eggs to other players’ birds or even prey on birds from other players, and these things are triggered due to game steps, specific birds being placed, cards being drawn (or whatever). At five players this is tough for inexperienced players, and at six or seven I could imagine it being a nightmare — even if things run reasonably quick due to two players acting at the same time. There are also two separate bird and food displays to draw from, so I can theorise how that might also be confusing — but with all that said, only a Wingspan veteran is likely to go for this mode, or to even have the components to run it.

There are two areas where Wingspan: Asia really works for me, which are as a basic expansion to the original game — where I always welcome more birds and objectives to mix things up — and as a two player version of the original idea. The new central board works really well because it is both simple and additive to the core idea, and it adds a lot more strategic play at the cost of a very, very slight increase in weight and rules complexity. Flock Mode seems “fine” as well, and I’ll never knock Stonemaier Games for including additional content, even though I doubt I’ll ever use it. 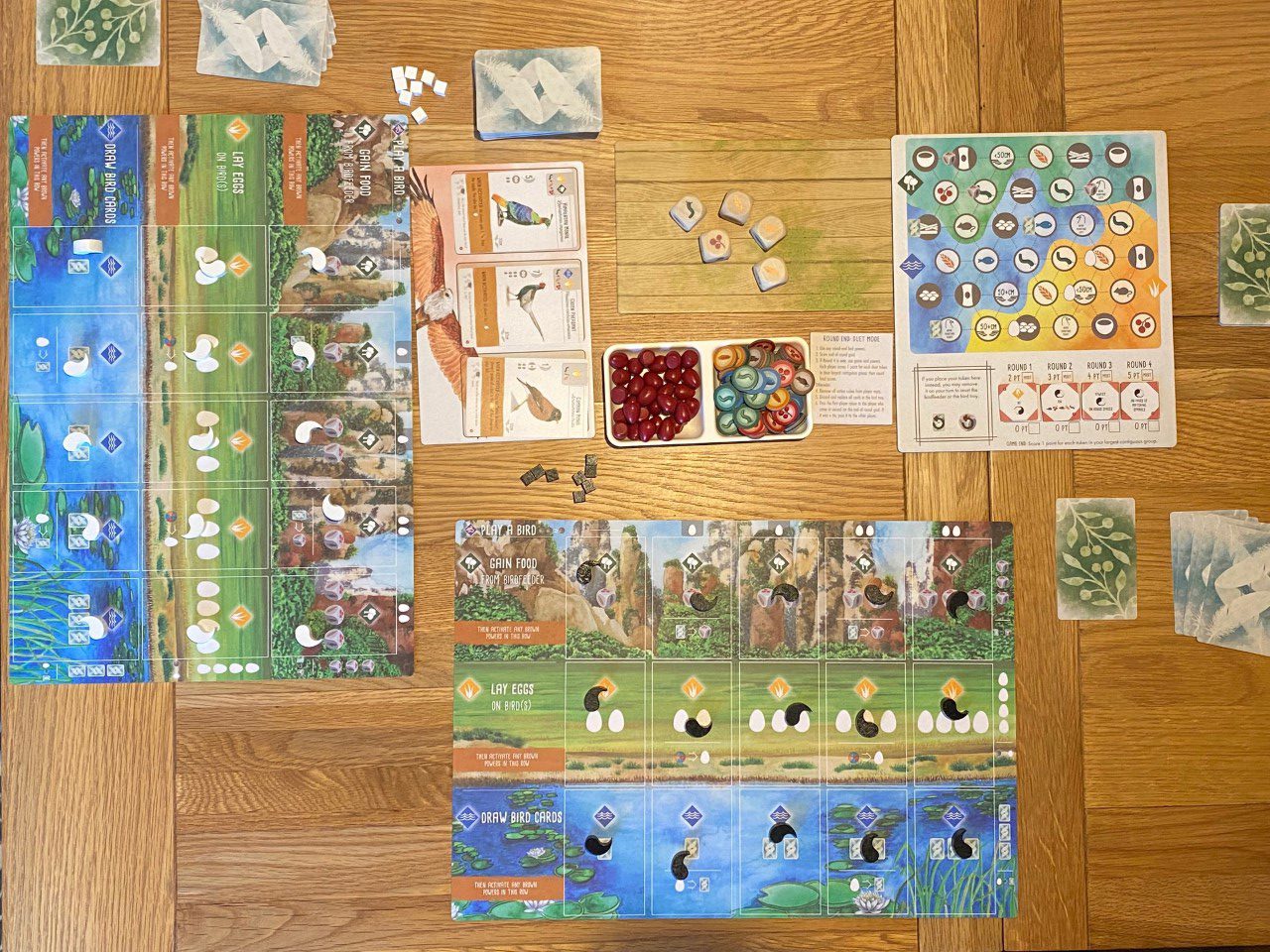 Wingspan: Asia is therefore a perfect place to begin your Wingspan journey, assuming that the two player count is important to you. If you already have Wingspan and just want the additional cards and content, there is still enough here for you. The card art is perfectly in keeping with other versions, the new eggs mix in well, and the food dice are — at worst — great spares for when your original dice start to wear. For me, this is another delightful expansion — it’s thoughtful, innovative and it adds to all areas of the experience. There’s nothing not to like.

You can purchase Wingspan: Asia on Amazon.