Coming straight off of part 1 of Leopold, called The Pendulum of the Dead, our group was left captivated and wanted to get into part 2. You see, the end of the first game leads right into this game, on a massive cliffhanger, so we were waiting to meet back up and see what happened. Leopold Part 2 of 3 is titled White Sleep.

White Sleep is a card-based, escape room-styled game, with a companion website. This website is where you will put in your codes and move forward in the game. There are a few different routes to take in the game depending on the decisions that you and your friends make. You start off by reading a rules card, then flip over the next card as instructed by the card. 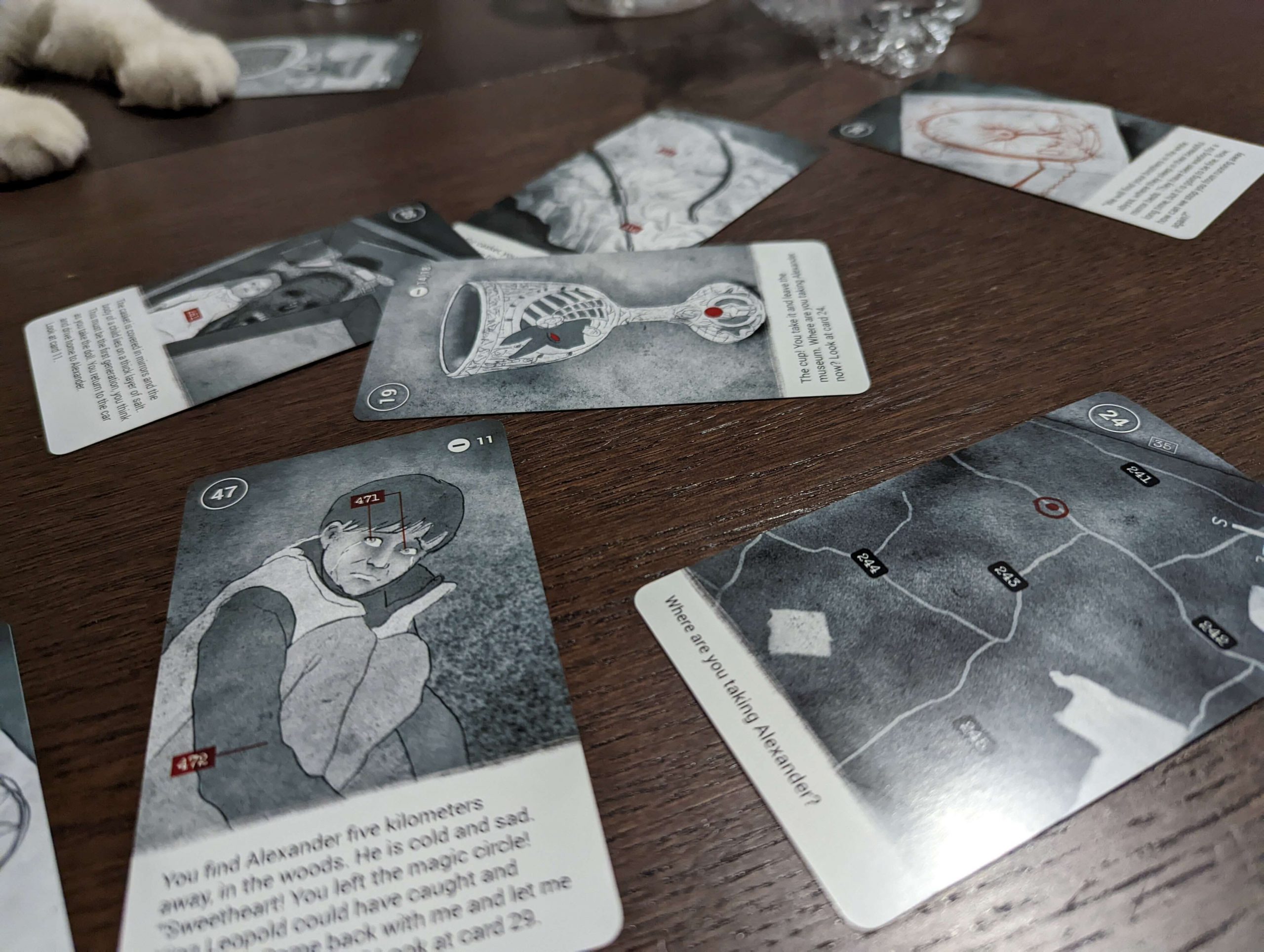 Inside the various cards, you can see semi-hidden numbers, which will allow you to pull another card out of the mix. Red numbers and black numbers are interactive, with red needing to be combined with another red, and black being a location number.

In this captivating story, you are Maria, who has recently (in the first game) escaped from an asylum. You have, in the previous game, dug up a dead baby, kidnapped a child, and are trying to defeat some sort of being called King Leopold, before he defeats you. You have a bit of a brain fog because of the medication you have been put on, so you can’t quite remember what you are meant to do. 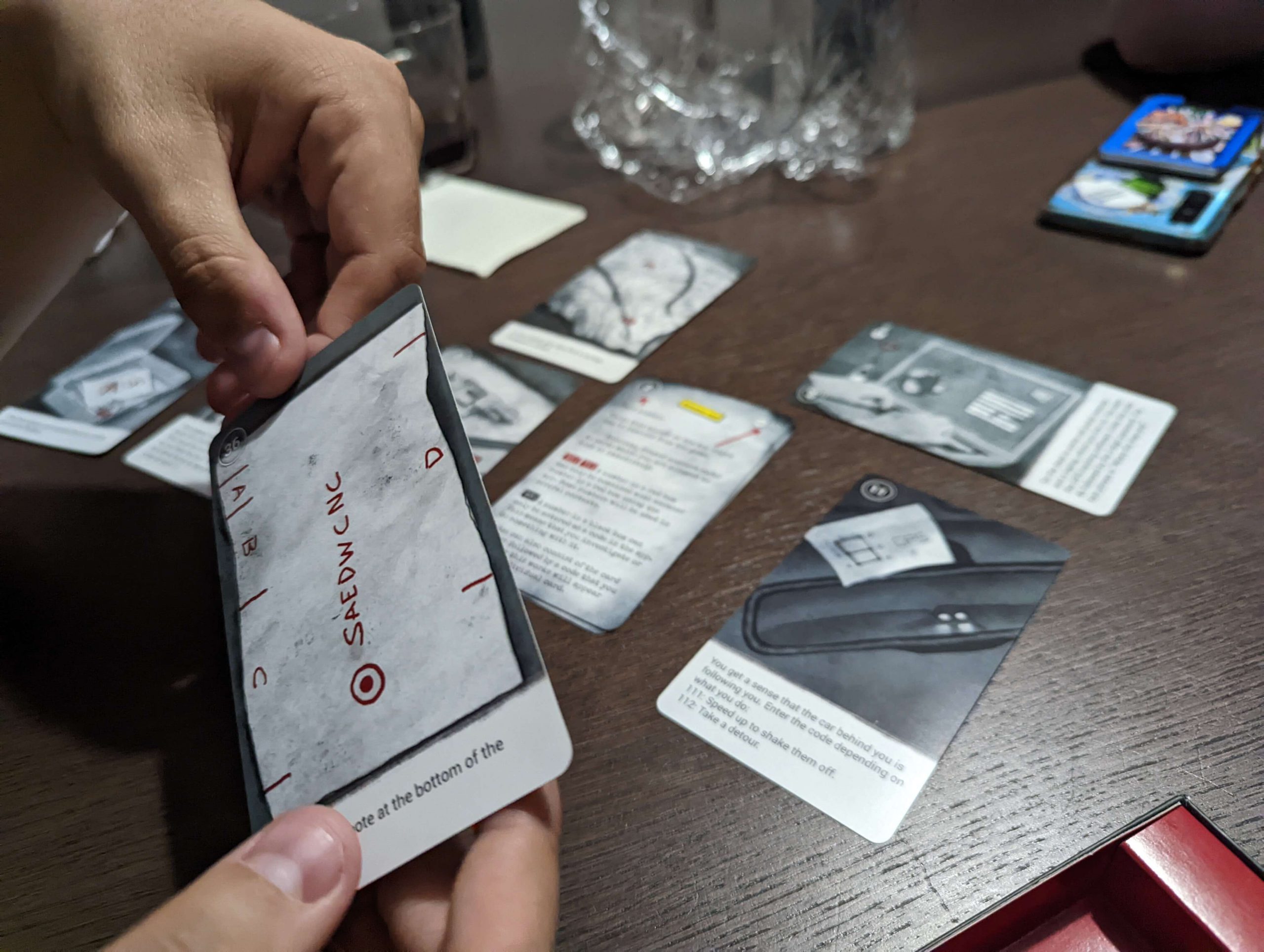 Using the cards in front of you, and then any subsequent ones, in White Sleep, you need to solve puzzles and try to figure out what to do next. When you feel you’ve solved the puzzle, it’s as easy as putting codes into the web page and seeing if it prompts you to draw some cards. On the page, there is also a hint option and at the end of each puzzle, you get a star rating depending on speed, hints used, and incorrect guesses.

Right off the bat, White Sleep has much more challenging puzzles then The Pendulum of the Dead. It felt like the challenge went up as we continued playing. There were puzzles that needed mirroring, which we figured out, but couldn’t successfully mirror the puzzle pictures no matter what we tried. Other complex puzzles just required a lot of mentally moving around what was clearly a guide on top of a little puzzle, which was hard to do without physically being able to move it. 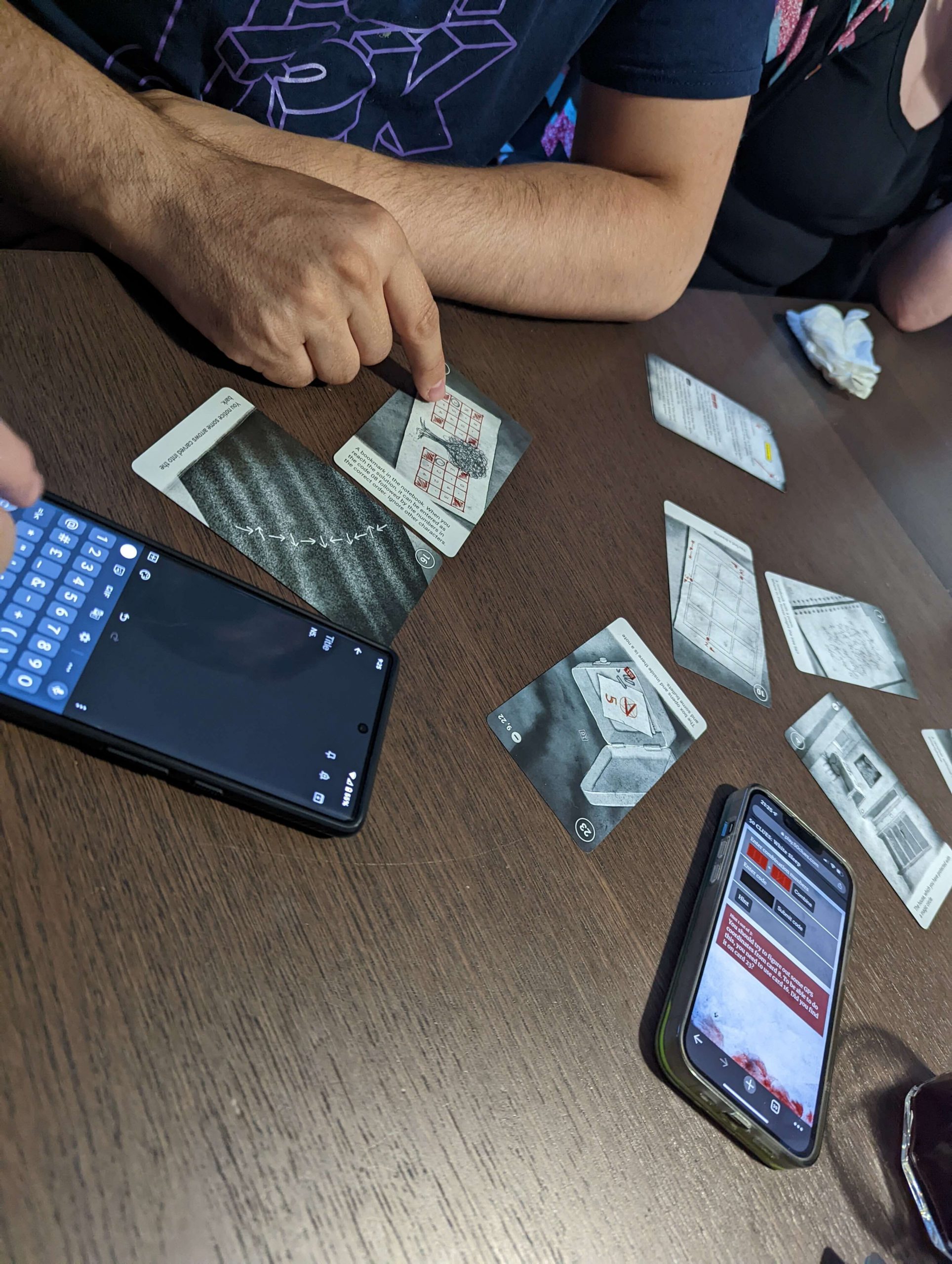 With this in mind, we ended up using the hint system a lot for White Sleep, which did frustrate some of our group. The first two things seemed like really obvious clues, and the third one is just straight up the answer, with no explanation on how they got that answer. We wish that the webpage then said how that answer was found, even if this was optional information, just so we could understand the thinking process behind some of these puzzles!

White Sleep is a really great next chapter, and we are really excited for Part 3. There are some gruesome parts in this story too, but it’s a very captivating and wild story to follow. There is a lot going on, a lot of mystery, and so many strange decisions. Sometimes, it’s hard to put yourself in the mind of Maria, as she wants to make decisions that I would never make myself!

You can find White Sleep on Amazon.

You can find Pendulum of the Dead on Amazon.