Space Run Galaxy takes the formula of the first title and attempts to build on the successes, and fix the shortcomings, by adding in a user driven economy as well as a more free form upgrade and mission structure. 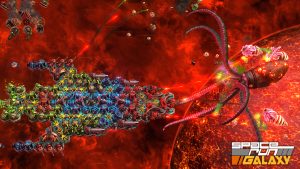 It’s a tall order for Passtech Games. The first game was divisive with a group of dedicated fans who are still actively playing the game to this day, while others declare they have no time for it, having sworn off of it citing difficulties. Space Run managed to stand out from the deluge of tower defence games (which underwent a similar boom alongside platformers & twin-stick shooters in the last half a decade) via a combination of graphical charm, carefully structured runs, a well developed setting, as well as some great voice acting. The complaints then, the micromanagement required to sustain the ship at harder difficulties, the restriction of ship layout throughout, and the shortage of levels; some citing this for causing a steep difficulty curve, others for it leaving them with little left to do when the final star rolls in. Indeed the new features feel accurately & specifically targeted at destroying weak points.

Space Run Galaxy sees you, the player avatar, taking to the wide expanses of space as the newest member of Buck Mann’s elite space runners. The last title’s protagonist has spent the last 20 years, real world nearly two, developing his own network of runners to aid development of the game’s systems – in total four. All of the faces from the previous title are back, with the familiar shifty-giants and simians doling out missions fully voiced and laced with the humour of the first title. Even the two space ship harassers of the first game are back, although now as boss fights – super tough, large ships which appear on certain runs to block your course and try to shred your ship down to nothing. It’s not just these two, several new enemies were added to the game, including strange space squid which latch on and damage ship parts – these all serve to change up the defensive requirements from the previous instalments simple annihilating of asteroids, and paddling of privateers. 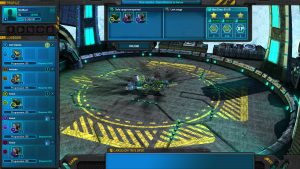 The way the game handles the levels has been completely changed and refined as well, with the previous game’s simple selection menus under the various available employees changed to an interactive system map screen pitted with planets, asteroid belts and stars. Each of the planets are designed to be different to one another – not only through appearance, but also through the facilities available at them. Where the previous game set your ship for you, and simply rewarded you with new weapon types through levelling up, this second iteration lets you swap between unlocked ship types at the shipyard. It let’s you visit the market and buy upgrade units. It lets you visit the mechanic and spend your rewards for successful runs on building upgrades and ship components – if you wish you can focus on the offensive, red, components and selling those you don’t want, instead spamming missile launchers all over your ship – there’s a great freedom there. Not all of these planetary options are available everywhere however, while one place might have a Green utility mechanic it may lack a merchant who sells parts – as such you’ll need to carry the upgrade components from station to station -loading them up like cargo- if you want to use them effectively. This actually massively expands the playtime of the game, as you’ll be re-running old routes in order to transfer those upgrade parts to a place where you might properly use them.

Not only has the map, upgrades, and way you interact with your ship’s upgrades changed – but the amount of content has sky-rocketed due to the multiplayer economy. You see – players can set missions for other players to complete, and even if that player doesn’t set a reward the game will reward you for the successful run. This actually means that if you’re stuck on the next story run – maybe getting eight crates of highly-explosive goods through that boss fight is too hard -even if you try four runs of two crates– then you can simply grind through a few of the player generated missions to get your money and upgrade components up allowing you to add a few more weapons or upgrades to your ship’s pool. It sounds a little flawed, however in practise the reward of a prize for each crate hauled means that there’s still a challenge there in transferring the crates – as you’ll want to maximise risk to get more of a reward for as few runs as possible.

Each of the playable routes between planets – be they the story ones, or the unlockable secret ones – clearly display your best grade when you are on the system map. You can also see which shops and merchants are available at each of the planets, as well as any multiplayer runs or trades available there. It’s extremely well managed, and does a great job of keeping the system and runs of the game in perspective. What, unfortunately, isn’t handled as well is the cargo you’ll be running about during the game’s jobs. The game takes several clicks from most points in order to select cargo from your active missions, and for it to bring up where the destination and goods currently are – it’s a little bit awkward, and something that would have been handled better with a map-mode toggle rather than a slightly awkward click through menus. 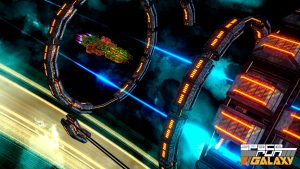 Probably the greatest improvement of Space Run Galaxy is the ability to buy, be rewarded, select, and edit your ship layout. A splash of resources can be passed to a mechanic who will exchange them for a few more ship tiles, meanwhile certain merchants will all out sell new ship layouts. I’ve no definite number to offer regarding the amount of ship designs in game, but the fact that you can bolt further panels onto each of the designs is absolutely fantastic. This means you can take a forward-facing U-shaped ship and buff out the central area that you might fill it with launchers. Or – even, you might take that perfect circle of a ship you have and give it central arms allowing you to completely restructure your offensive.

This new, open-mission format combined with user contracts, and a variety of ship customisation means that a lot of the first title’s initial received qualms have been thoroughly quashed – now the greatest threat to a successful run isn’t a puzzle-style, weapon-layout slog, but instead a case of balancing your own greed and ambition in cargo-space with the potential dangers of a route.

In fact, my only complaints about the game are menial – the earlier mentioned run-route display on the system menu being the stand out one. Although, that said, the game never informed me of the temporary zoom functions that shift+control perform – this changed the game up for me once I stumbled across it.

Space Run Galaxy is a fine example of how a developer can transcend an over-saturated genre’s mechanics, and it’s near perfect less those few fiddly menus. Oh – and, as I opened with, the voice acting and writing is exceptional.