Flinthook gives you all the tools you need to feel like a boss. Stop time, kick butt, take names, and fly through the air like a majestic acrobat.

There is plenty to unpack when it comes to Flinthook,(Steam link) but let me start by saying that Flinthook is one of the best Roguelikes of 2017. Cohesively this is along the lines Binding of Isaac, Spelunky, and Rogue Legacy in design and gameplay. All games that I hold in high esteem. Personally, this was a game that just felt like putting on a comfortable sweater. It was warm, familiar, and just felt right. I haven’t had that in quite a while when it comes to Roguelikes. Personal feelings aside, Flinthook is just a well oiled machine. It’s very smart and smooth. You can tell each facet was given a good amount of attention from the developer.

Let’s dig in shall we?

Space and pirates just go together like me and donuts. Very sweet, filling but bound to kill me eventually.

Flinkhook is a roguelike action/platformer with procedurally generated rooms and permadeath. The story goes that you are a bounty hunter and need to hunt down the Pirate lords. There is a bit more going on underneath the surface though with The Lighthouse Keepers, a magic race and some guy named Gwarlock, but that is the basic gist. 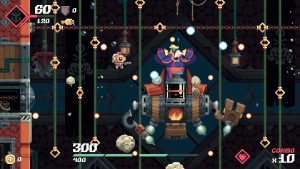 When you load up the game you are greeted by one of the best game intros I have seen a very long time. This immediately just lets you know the tone, art, music, are all top notch and you are in for one hell of a ride. Before we begin talking about game mechanics, I just want to underline how fun the style of Flinthook can be. Where games like Binding of Isaac just nailed their style right out the gate, Flinthook does the exact same, with its crazy enemy design and charming main character inside his adorable ship.

The sprites are fantastical and everything glows. Level design itself has the same level of explosive colorful detail that will, at times, make you dizzy. When I say dizzy I mean that the game can come off as overwhelming at times with just the amount of things happening on the screen. On some levels this is great but action can become a very hectic experience. One thing I found impressive was the way level design is handled. As the game progresses more rooms are added and then on top of that there are variant styles, depending on difficulty.

This means that while you may recognize the room you enter, the enemies, traps, and treasure inside are going to change. Making a room you thought was easy, suddenly an unrecognizable deathtrap. While all the enemies/bosses are well designed there is a bit of a color swap for variation of more difficult enemies. It’s not my favorite thing but there are still plenty of unique designs here to enjoy for hours. What captivated me most was Flinthooks way of being playful with all of its design decisions. The bosses are over the top, our main character flips and flies off,  and the way you smash open shells/card packs. It is all these little touches that give it that extra little personality that goes a long way.

To quote Muhammad Ali “Float like a butterfly, sting like a bee. The hands can’t hit what the eyes can’t see.”

This is a pretty good way to explain the combat of Flinthook in a nutshell but I will elaborate.

Flinthook has many mechanics that are super easy to grasp, however mastering them is an art. An art that I completely fumble with. You have two main mechanics to master in order to, “Float like a butterfly”. You have your hook and Chronobelt. Throughout all of the levels are hooks that you can grapple to navigate around enemies, traps, and practically never touch the floor. To help with some of the logistics you have the Chronobelt which slows down time and makes it easier for you adjust targeting and movement.

To, “Sting like a bee” you have the Blasma pistol, which can be modified in a number of ways with perks. You can also use items such as bombs, and there are items that allow you to freeze a room or become invincible for a short while. There are permanent perks and temporary perks to enhance all of your arsenal of tricks/weapons/movement. These perks are what the game uses to give you a feeling of advancement and progression.

Blasma Pistol not hitting far enough away? Unlock enough of your perk meter to slot in a long shot perk. The perk meter can only fit so much depending on how powerful the perk. Simple things like higher crit or more gold are a point a piece. Adding huge chunks of health costs way more. The way you gain these perks is through card packs gained by having successful raids and leveling up.

It’s a system that plays off each other in a smart, cohesive manner. It lets you craft a style that suits your own personal taste. 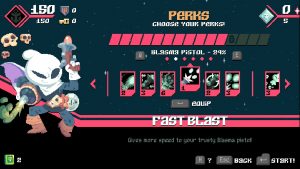 The linchpin in all of this is making it all work when in combat. You have all the tools you need to be unstoppable but application is far more difficult than it seems. While the argument “git gud noob” could be made, Flinthook is guilty of some crimes. There are times that the game kinda just cheats you and gets a cheap shot. Whether that be something you couldn’t see off screen or just the sheer number of shots flying at you.

Which brings me to, “The hands can’t hit what the eyes can’t see.” You are gong to feel overwhelmed quite often while raiding ships. Some rooms just have so much going on that you would need spider eyes to keep an eye on everything. However, I found as you play more and more you do start to realize things are simpler than they seem. You find that magic sweet spot as it were, in trap heavy rooms.

Taking stupid damage is something I found myself doing often.

Keep in mind the Rogue aspect when playing. Certain enemies are surrounded by a bubble that needs to be popped before they can be hurt. Add a room full of traps and suddenly your entire run can go from great to miserable in five seconds. Rogues giveth and Rogue taketh away. 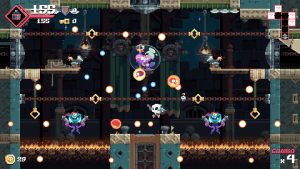 Here is what brings me to my final gripe. The aiming in this game is tied to movement. Now this didn’t bother me as much as it may bother others to be honest. My issue was that I found myself bumping into enemies and taking damage from that more than I took damage from actual traps or shots. Despite these hiccups though, combat is fast, reactive and fun. Is it perfect? No. but it’s very addictive and challenging.

While I see my skills being fair enough to beat the game eventually, I am very excited to see players who have indeed mastered this delicate balance of floating/shooting/slowing time. It will make for some really awesome let’s play videos. 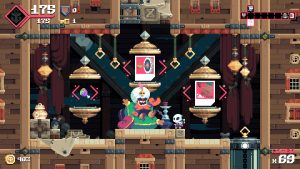 The flow of the game is this: you pick a bounty. That bounty can be tracked through spirit stones gained at the end of a successful raid. The first pirate lord costs three spirit stones to track down, so you have to raid three ships with varying difficulties and random elements. You read correctly, there are even more variety involved even with the ships you choose to raid. Some of them have random effects like asphyxiation which puts a timer on getting through the ship. You may find a ship filled to brim with destructible goodies for gold. You may even find yourself in special ships if you fulfill certain criteria, like the Ghost ship. Finding this ship requires you to seek out negative perks purposefully making it harder for yourself.

The difficulty of the game is all on your shoulders. If you pick the right perks and can avoid stupid damage, then the bosses and enemies in this game are rather simple. The boss fights feel epic but all have a pattern to them. Once you figure it out, it’s super easy. Thankfully there is a hardcore mode for each boss and an infinite raid mode for those of you seeking a challenge. It’s these little secrets/variances inside and outside the ship that give the game quite a bit of longevity and replay value.

Moving on to the accoutrements.

There are all sorts of side things in the game, such as relics, lore and a weekly/daily challenges with a leaderboard, if you’re into that kind of thing. I enjoyed these aspects, as they all work toward making you feel rewarded. The game does have full controller support but sadly lacks re-bindable keys. This is one of those games you don’t want to play with your keyboard. At least I wouldn’t recommend it, as it might make things more difficult. There are also Steam cards/achievements as well. 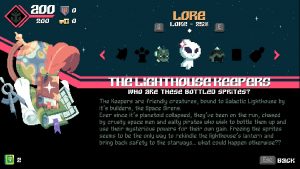 While I touched upon this briefly, Flinthook has a GREAT deal of replay value. This is a game that I could just put on and play mindlessly for hours and hours. The progression system in this game with the perks, always makes it feel like you are working for something. How long does that last? I am about twelve hours in and still have a long way to go. You may beat all the bosses in that time if you don’t suck like me but I doubt you will have unlocked everything and found every secret.

The music and sound of Flinthook deserve their own praise. The music is one of the best OST I have heard in quite a while. It’s just so fun and it reminded me of old games like Mega-man and classic action games. It never got to be too much and each track felt fresh. The sound effects are just about as good, but the menu sound effects did drive me nuts when I had headphones on. Thank god for sound sliders. You can purchase the OST separately or pay a little extra to get it with the main game.

To sum, Flinthook is fun, wants you to have fun and is a challenging experience you can come back to over and over again.

While it doesn’t reinvent the wheel. Flinthook certainly brings many familiar elements you recognize and does new and fun things with them. There is a huge amount of variety here to lose yourself in and it helps that Flinthook is pleasing in almost every way aesthetically. I found no bugs while playing the game and all it just runs smoothly from beginning to end. This is a complete package and that is why it’s easily one of the best of 2017. Coming in at $14.99/£10.99 this game deserves a spot in your collection if you love Roguelikes. You won’t regret it.