I am a big fan of food-based board games. I have an entire bookshelf dedicated to the food theme games I have come across and picked up in my time. I am also from New York, and love Pizzas — my dad was a Pizza cook before I was born. So, I had to purchase a copy of New York Slice when I saw it at a local board game shop.

This is a very simple, collection based board game that has you grabbing up slices of pizza and making short, sharp decisions on what you want to do with them. To set up the game, there are a bunch of piles of pizza slices, with special deal cards placed out. Each stack gets a set number of slices and one special card on top. The player whose turn it is gets to slice the pizza. 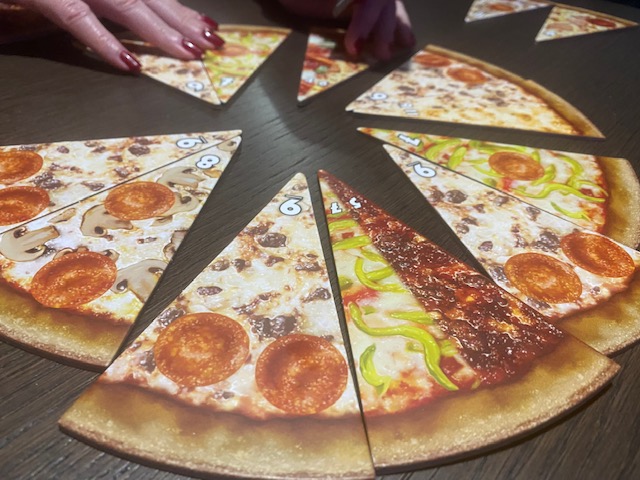 If you ever had siblings, you might have heard your parents say one of you can cut it, but the other gets to pick which bit they want. That was in fact a rule in my house when I grew up, and is how this game starts. The pizza slices get randomly turned over and added together, to create a whole pizza. Then, the player who has placed the pizza out, needs to divide the pizza into slices. These slices need to be with the slices next to them — you cannot move the pizza around. One of the collections of pizza then gets the daily special card.

Once a player has moved a portion onto the table in front of them, they can decide if they want to eat it or leave it. If you eat it (which you can only do the moment you get it, as nobody likes cold pizza) then the pepperoni pieces on the slice are then counted towards points at the end of the game. Those slices get flipped down, to just show the crusty bottom. The next person then gets to choose the portion they want, and this continues until the person who broke up the pizza gets the last divide. 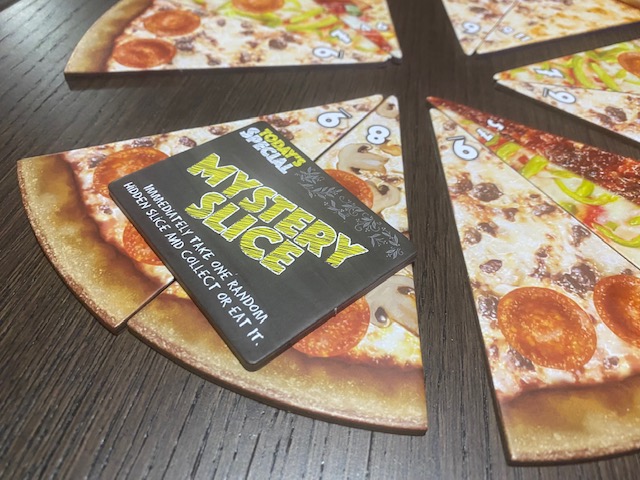 Special cards can be used depending on what their ability is. Some let you take a random slice from another pile, others make it so you like anchovies (which otherwise give you a negative mark during scoring) or some let you be the first person to choose the next round, even if you aren’t meant to be the first.

At the end of the final round in New York Slice, it’s time to score. On the bottom of the different slices are numbers. Going from the lowest number you have in play in your game through to the highest number you have, the score keeper will call out the number and players will call out how many slices of that number they have. The person with the most slices with that number earns that number, which equals that many points. Everyone else gets nothing. If there is a tie, unless someone has a special card which states they win ties, they both get nothing. This is quite a tricky thing, and you will find yourself counting pizza slices out in front of people during the entire game. 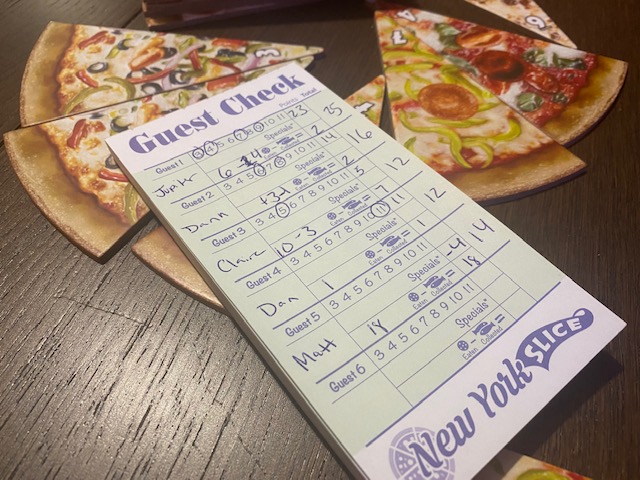 Once pizza is dealt with, any eaten pepperonis are added to scores, and any anchovies are taken away from the score, to give a final score. This score is all marked on an order sheet that is reminiscent of that which a waiter at a pizza joint would use to take your order, a very cute addition to the theme. There are plenty of these order forms as well, so you can play quite a bit!

New York Slice is a really easy game to take out and play. I love the look of the pieces and the general theme as well. My only real issue with this game was actually the box. The board game box opens like a pizza box, which isn’t an issue. It is, however, really hard to get everything to fit back into the box. There are two long sections in the box which don’t quite fit the pizza slices nicely, so it’s a lot of trouble to just put away the game one you’re done playing.

You can pick up New York Slice on Amazon.